By Tom Duggan on May 7, 2007Comments Off on Criminals and Cop Haters “Educate” the ACLU

How People Hear What They Want to Hear 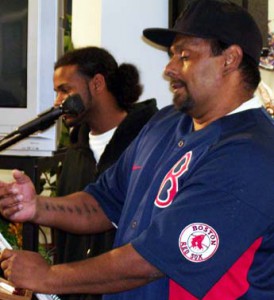 Last month the ACLU came to Lawrence for a meeting with citizens who had a beef with the Lawrence police. Packed in the large function room at “Casa Dominicana” on Essex St. were criminals, malcontents, racists and cop haters, all eager to take the microphone and tell their sad, sorry tales of woe at the hands of the evil, racist Lawrence police department.

One father stood up to tell everyone how his “good boy” of 17 was roughed up by the cops after being arrested for “violating his parole.” This father stood at the microphone with gang tattoos up and down the insides of his arms as he told the crowd how his angel was a victim of police brutality for being a “Latino.”

Then there was Lawrence businessman Julio Meran. It was Meran who had invited the ACLU to Lawrence in order to whip up fear and resentment against the Lawrence police within the Latino community. He even likened the Lawrence police to Nazi “Gestapo’s” when recounting his own tale of “abuse” at the hands of a Lawrence cop.

According to Meran’s own account, he was given a ticket after a police officer cut him off on Merrimack Street, even though he was perfectly polite and treated the officer with the utmost respect. In his own words, however, Mr. Meran wasn’t abused. He wasn’t assaulted. He wasn’t arrested. He was not called a racial epithet. No, no, Mr. Meran’s tale of victimhood was simply that he was given a ticket by a police officer who cut him off and then demanded his license, “Gestapo style.”
Not one of the six Lawrence city councilors sitting in the audience objected to Lawrence cops being likened to the German Nazis who executed millions of people in World War II. But one of them did side with the criminals.

But, Was Anyone Actually Listening?

Then there was Ramon Vargas, a stalky, intimidating looking man who weighed at least 300 pounds. Vargas started off by showing pictures of his bruised face and body. Bruises he claimed were the result of police brutality and, of course, because he was a “Latino.” But as Vargas told his own story in his own words, it was pretty clear that the injuries he received took place because he was resisting arrest and being combative with the police, not the other way around. Vargas himself said that he was at a party when Lawrence police showed up and told everyone who did not live in the apartment to leave. This is standard procedure when cops break up a house party.

Vargas freely admitted to the ACLU that he argued with the cops because “I sleep there on weekends” and didn’t see any reason why he should have to leave the apartment. The cops asked him three separate times to leave the property and when he refused the third time, a cop told him he was being placed “under arrest.” Vargas then admits he resisted arrest and fought with police who sprayed him with Mace while they were “trying to put on the handcuffs.” 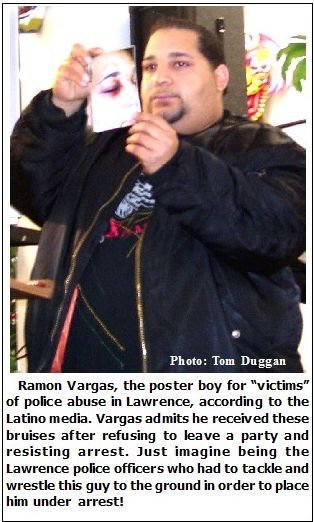 That’s when, Vargas says, Lawrence police stated (in his presence, of course), “Let’s hurry up, we have plenty more of them to get,” supposedly referring to “Latinos.”

The audience, including some Lawrence city councilors, gasped in horror as Vargas told his story, evidently discounting his own culpability in the situation because of their preconceived notions about the Lawrence police. City Councilor Nunzio DiMarca (who has his own personal vendetta against the police) burst out loudly, “this is why we are here, to put a stop to this kind of thing!”

Perhaps if Mr. Vargas had left the party when he was told to the first time, he wouldn’t have any bruises and he wouldn’t have been under arrest at all. And if Ramon Vargas had complied with police officers and put his hands behind his back, he would not have been Maced during the arrest. But the very fact that he was Maced while cops “were trying to put on the handcuffs” kind of says it all, doesn’t it?  I’m sure that if Mr. Vargas was white and behaved that way towards police he would have received the same bruises at the hands of the same cops who were lawfully taking him into custody.

But don’t tell that to Councilor Nunzio DiMarca. He wants the City Council to take up the matter of “police brutality” and have more public forums so that he can be the white knight in shining armor to save the poor down-trodden Latinos. Once again, Mr. DiMarca is trying to “out-Latino the Latinos.” It’s political pandering at it’s worst.

No Lawyers, Lots of Media

Of the dozen or so people who spoke that night, not one of the cop bashers had a clear and convincing story that would stand up to the scrutiny of an objective legal challenge. Maybe that’s why no lawyers have come forward to represent any of them in suing the city. Think about it. If any of the people in the room that night had a legitimate case against the Lawrence police, there would be dozens of lawyers soliciting them for representation. But that hasn’t happened. If it had, these “victims” wouldn’t be speaking at a public forum about their cases. The first thing any good lawyer will tell you is : DO NOT speak publicly about your case because any inconsistency in your story will be used against you later in court.

Yet, there they were. Not in a court of law where questions can be fairly asked of both sides to discern the truth. They were not in a neutral setting where the complainers could be questioned and their stories could be challenged. They were at an ACLU meeting with like-minded people who had already made up their minds that the Lawrence police were racists, corrupt and out of control. And the Latino media lapped it up like Al Gore at a Global Warming convention.

The saddest part of this whole fiasco is that the Spanish language media accepts these abuse claims as gospel. Spanish media reporters do not investigate allegations for their validity. They do not question the motives of the criminals. They only question the actions and motives of the police. Then they portray the criminals’ point of view as fact. This kind of “reporting” creates more fear and mistrust by Latinos towards the Lawrence police, all the while it is the hard working Latinos in Lawrence who are most often the victims of crime that the police are trying to solve.

What’s even worse is that the Latino media takes individual allegations of abuse and corruption and strings them all together to make the entire department look corrupt. The fact is, most Lawrence police officers (white, Latino, and others) are willing to take a bullet on a moment’s notice to protect the lives of any one of the cop bashers crowded into the room that night. They are hard working, honest and decent law enforcement officials who follow the law and put their own safety in jeopardy to protect all of the citizens of Lawrence, regardless of ethnicity.

What About Real Police Brutality?

It’s just not realistic. Nor is it fair to the public, the complaining citizen, or the police officer who is being accused. No matter how this kind of investigation is concluded, even if the Lawrence police follow the letter of the law, the mere fact that Lawrence cops are investigating Lawrence cops takes away any credibility or legitimacy with the public. And it plays right in to the propaganda game of cop haters like Julio Meran, who use this fact to discredit the entire department, further adding credibility to their claims of corruption and cover-ups.

Of course, there are a few bad cops in the Lawrence Police Department.  But each of them should be inves-tigated individually without casting a “stereotype” on the rest of the cops in the department. Every suspected bad cop should be investigated by an outside agency (like the DA or the sheriff’s department) to restore the faith and trust of the community. And, when found culpable, should be fired or put in jail for disgracing the badge and uniform.

But let’s not compare the cops who pulled over Julio Meran with the cops who are truly racist or abusive. Let’s not liken the police officers who rightfully arrested Ramon Vargas with those who are out there committing real crimes. That kind of moral equivalence and sinister rhetoric only serves to provide shelter for the abusive cops while the rest of the community is busy going after the cops who were only doing their jobs.

None of the evidence (if you want to call it that) presented before the ACLU last month showed any hint of systematic corruption, racism or abuse by the Lawrence Police Department. Believe me, if there was even one person who appeared to have a legitimate claim of abuse or corruption, The Valley Patriot would be the very first to investigate and publish his story.

I can tell you that there is little I despise more than a corrupt or abusive cop. Those cops disgrace the badge and uniform my father lived and died for. Renegade cops jeopardize the lives and the livelihoods of every good cop doing his job on the street. They make it so much harder for the cops who truly care and strive to gain the public’s trust to make a positive difference in the community.

What’s worse than a corrupt cop, however, is a loud-mouthed, racist malcontent who makes false allegations against police and cannot back it up. Or a city councilor who campaigns for office by bashing the police and pan-dering to criminals. And that’s exactly what happened at the ACLU meeting last month. It’s just shameful that the Spanish language media didn’t take advantage of this opportunity to build bridges between Latinos and the police by doing a real investigation and telling the truth about who these people are.

But I guess that’s what happens when your mind is made up before all the facts are all in.


Tom Duggan is the president of Valley Patriot, Inc., a former Lawrence School Committeeman, and hosts the Paying Attention! Radio Program on WCAP, 980AM, every Saturday afternoon from noon-2pm. You can email your comments to Tdugjr@aol.com .

A side note on Siglo21’s inaccurate reporting on Kurt Charenza who attended the ACLU meeting but did NOT claim abuse. >>>>Siglo21