By Paul Murano on August 26, 2014Comments Off on Culture Clash of the Middle East and the West: Anger vs. Apathy – BENEATH THE SURFACE with PAUL MURANO 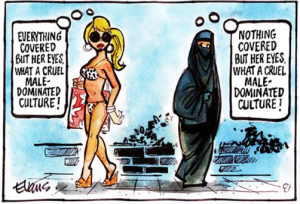 There are different ways of understanding the clash of cultures between the Middle East and the West today. I will offer one perspective. The culture clash relates to the two sides of hate: anger vs. apathy.

Anger is a reaction to perceived injustice that if left unchecked can quickly turn into hatred. It has the power to last a lifetime and fester for generations with continued violence. It is a pre-Christian attitude, for only forgiveness can stop the cycle of violence that results from harbored anger. The other extreme, apathy, frequently takes the form of a “live and let live” attitude, often masking a loathing indifference toward others. It tends to turn inward to isolation and self-absorption. It is a post-Christian attitude, which lacks meaning and hope.

With men we see these extremes played out in the news media covering world politics. With women it is summarized in the above cartoon. Each woman sees the other as being abused and oppressed by men, yet each claims to be free themselves. Symbolically it communicates that Middle Eastern women are victims of domination as they protect themselves from lust, while western women are victims of lust as they protect themselves from domination. Domination and lust, the two effects of original sin that create the distortion of love between the sexes, are illustrated in this cartoon as the result of an angry and apathetic society respectively.
Interestingly, what has been lost to westerners here is that their own roots parallel cultures of the Middle East. Practices in the Middle East such as honor killings and putting to death adulterers, practicing homosexuals, and those who question the authority of the state, can be traced to the ancient origins of the West. Socrates was killed for questioning the beliefs and authority of his time. Mosaic Law demanded the Israelites put to death people for performing many of the same behaviors that traditional Muslims forbid, as did pagans from Scandinavia to Africa to Asia. When the Spaniards arrived in the new world they discovered Aztecs regularly practicing child-sacrifice and other natives collecting the scalps of their enemies. The entire ancient world was one of anger, domination and conquest, whose underlying moral principle was “might makes right.”

Much of Islam today is where Israel, Greece, and Rome were before the Light of the world was born in Bethlehem. When this Light began to permeate human culture the Christian era was established, and the hatred of harbored anger that festered in men’s hearts for countless centuries was offered an alternative – forgiveness, love of enemies, and self-sacrifice. Because it wasn’t fully embraced, sporadic violence and war continued; but the world’s great renewal in the Christian era saw western civilization flourish in unprecedented ways of human achievement, with a newfound respect for the dignity of women and for the sacredness of human life.

Prosperity, however, often leads to pride, indulgence, and sloth. The renewal of life turned into a new commitment to death. When modern western man boldly rejected the law of God, reaching out once again for the forbidden fruit, this time in the form of the birth control pill, the culture of lust and domination returned with a vengeance. The post-Christian era was born. The apathy of this era is more subtle than the outward anger of pre-Christian cultures. It is marked with isolation, depression, anxiety, meaninglessness; and the futile attempt to avoid this emptiness with immediate pleasure. Unlike the pre-Christian world, however, technology hides many effects. We have televisions with over 500 channels, as much comfort food as we can eat, computers that allow pornography at the touch of a button, and “clinics” that take care of our “problem” should our fornication culture produce pregnancies.

When we look across the ocean at the “backward and barbaric” practices of anger, violence and domination, but fail to see our own culture’s more subtle but just as deadly practices of apathy, lust and abortion, we miss the bigger picture. The pre-Christian world is like the angry and confused adolescent seeking meaning to life while throwing a tantrum. The post-Christian world is the suicidal hermit who has given up on meaning and is dying of old age alone. Only the light and life of Christ gives the world its meaning and hope. Only He is the answer to anger and apathy, confusion and hopelessness. Only He is the solution to this culture clash of the 21st Century..

Culture Clash of the Middle East and the West: Anger vs. Apathy – BENEATH THE SURFACE with PAUL MURANO added by Paul Murano on August 26, 2014
View all posts by Paul Murano →