In 2005, Sergeant Daniel Cotnoir of Lawrence was named Marine of the Year by the Marine Corps Times for his outstanding bravery and service to the United States.

Sgt. Dan Cotnoir began his military career in 1999 when he joined the Marine Corps. He was trained as an armorer (small arms repairman). But his military career took a big turn when his civilian career as the funeral home director became his military assignment in Iraq.
Sgt. Cotnoir’s became a mortuary affairs specialist whose job consisted of retrieving the remains of fallen Marines from the battlefield so they could be prepared and brought home to their families for a proper funeral and burial. In 2004, Cotnoir and his unit of 20 men were deployed to Camp Taqaddum, Iraq for Operation Iraqi Freedom.
During Cotnoir’s service to this nation he was responsible for returning 182 fallen heroes back to their families here at home.
The grueling task of recovering fallen Marines often included sacrificing his own safety to retrieve these hero soldiers. More often than not, Cotnoir had to endure heavy enemy fire.
Dan even helped cut down the burned bodies of civilian contractors hanging from a bridge in Fallujah, the shocking scene that was broadcast via satellite all over the world.
Cotnoir was promoted to Sergeant while in Iraq.
Because of his service in the Marines as a mortuary affairs specialist, Cotnoir earned the title of Marine of the Year in 2005. In the Citation it states “For Sgt. Cotnoir was called upon to do what no other Marine really wants to do, but what must be done: take charge of bringing fallen Marines home to their final resting place, from the battlefield. This he has done with a tremendous sense of honor and dignity befitting the memory, sacrifice and integrity of those who have given their lives for our country…His selflessness and dedication to fallen Marines and to their families back home is truly inspiring.. It is truly our honor to recognize this outstanding, unsung hero.” 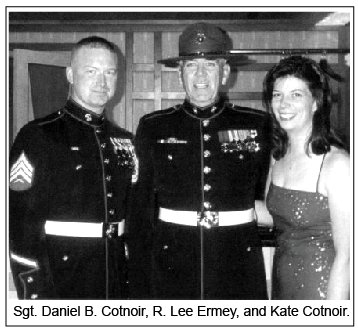 Dan Cotnoir’s family has owned Racicot for over 19 years. He went to Camp Pendleton in California where he was assigned to help train Marines in mortuary affairs. The assignment involved teaching Marines how to clean and recompose bloodied bodies of soldiers killed in combat. Cotnoir helped pioneer a new mortuary affairs occupational specialty for the Marine Corps. He trained 40 Marines in mortuary and remains-recovery skills. He wrote a manual and designed a specialty training package.
Cotnoir continues to give back to the community. He organizes an annual Marine Corps golf tournament that raises money for Toys for Tots and volunteers for military funeral details. He is a member of the Lawrence Exchange Club, life member of VFW post 8349 and life member of AMVETS post MA29. Cotnoir is also a member of the Marine Corps League and American Legion Post 122.
Cotnoir also ran for mayor of Lawrence in 2009 and has volunteered his time on numerous boards and civic organizations.
For his bravery and sacrifice to his country as a Marine and his continued activism and service to his community here at home, The Valley Patriot is proud to honor Sergeant Daniel Cotnoir of Lawrence as our Valley Patriot of the Month.
Thank you Dan for making our country and community a better place and being a role model to young men and women  everywhere.
We will never be able to repay you for your heroism!

One Response to "Dan Cotnoir, Valley Patriot of the Month"