By Tom Duggan on May 15, 2017Comments Off on DCF Disgrace in Methuen ~ What is DCF Costing Methuen Taxpayers?

“The Department of Children and Families has worked diligently to build a strong system for protecting children and families across the Commonwealth. Recent enhancements include hiring more than 550 new employees in 2014 and distributing nearly 2,400 iPads to help social workers access case information remotely and report information on families more efficiently.” ~ From the DCF Website

After The Valley Patriot learned last month that Department of Children and Families (DCF) officials were refusing to cooperate with Methuen Police in the case of missing 13 year old Jessica Jiminez, we asked the police department to provide a list of how many police calls the cops have responded to regarding children in DCF care within the city.

We wanted to know how much the Methuen tax-payers are spending in man-hours, and overtime for the lack of control DCF has over the children in their custody.

Police also responded to DCF for other types of police calls at the Mystic St. location 17 times, while they were called to the Lowell St. location 20 times. That’s a 2017 total of 37 police calls for criminal complaints not related to missing children. 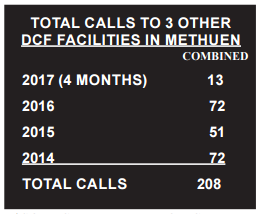 By comparison, so far this year, Methuen Police have only responded to a total of 13 calls for service of any kind to all three of the other facilities.

“Without the exact numbers in front of me, I can tell you we are looking at over $45,000 to $50,000 in detective time alone responding to DCF calls to those two facilities, from January to May 1st of this year. That’s not even half the year. So, over a four year period, you are looking at over $200,000 in costs to the Methuen Police Department for issues DCF is being paid to handle.”

“When we get a call for a missing child, a patrol officer responds to back the detective. They write a report, a sergeant approves it and passes it on to detectives and we go through the process. We are looking at double the amount of man hours for each DCF runaway case.”

So, for detective time only we are talking about 780 man hours last year. If you want the total cost you have to double or triple that.

That doesn’t factor in spending the time and man hours to put the call out to NCIC, put out a BOLO (be on the lookout), and then have our social media team make fliers, post and get information on-line and go out and do a search. The taxpayers are wasting 1,600 to 2,000 man hours a year. As a side note, this year we are on pace to beat last year’s number of calls for missing kids and problems in the Key Program.”

Solomon says the number of police calls to these two facilities are higher than the others because those other three are lock-down facilities.

WHY IS DCF FAILING CHILDREN

Asked why the problem has spiked in recent years, Solomon said that DCF does not want to change their policies and procedures.

“Based on some crazy study that says positive reinforcement is far better than consequences for your actions, DCF has mandated, a hands off policy. They can stand in front of the door but cannot physically restrain a child in their custody who is trying to leave. It’s crazy. Look at the results.”

“Prior to this we would get calls of a kid trying to run away, they would hold them there physically until we could get there, and then take them to the hospital if they had mental health issues or deal with the problem there. We didn’t have the number of runaways we have now.”

“Once you tell the kids there are no ramifications for your actions, once you tell them ‘we are not going to physically stop you and there is no punishment, no negative consequences’, it becomes a game. The tail is wagging the dog at this point. The kids have all the power.

Solomon says he met with DCF staff and a representative from the head of DCF.

“They were no help at all. They were totally uninterested in anything I had to say. When a kid runs away they just move the kid, and then they run away again. I asked them if they had any plans to change their policies. They don’t.”

“I don’t know if you remember the runaway from DCF on Lowell St., last December. We found her, returned her, and DCF placed her with a relative, where she ran away again that night. We found her in Lawrence and she had been shot. She did survive. But they are ‘extremely concerned” he said frustrated, rolling his eyes.

“I know I’m going to take heat for this but, I was very disappointed by the lack of real concern by DCF. They just aren’t taking any of this very seriously.

“This is a systemic issue, something is wrong with the policies. These kids are out of control. I was told they have a study group looking at policies. So, asked them who from law enforcement is in the study group? They have group-home managers and psychologists, but nobody from law enforcement. So, I volunteered. I reiterated several times that a first responder needs to be part of that group.”

“I never heard back,” he said in frustration.

“How do you put a study group together on runaway children and not include first responders who will be dealing with this blindly? How do you not put us on that board? Either me or a member of my department?”

“In Lawrence, Haverhill and Methuen alone we have between 900 and 1,000 kids running away. Even if you have a patrolman on that board, what a wealth of knowledge they would have to benefit from, I mean, if we really care about the children.”

“We have to look at it like a child welfare issue, I get that. But, really there has to be a system in place to manage the chaos. Right now they aren’t even managing the chaos and it’s all falling on us.”

If you are a DCF employee and would like to meet with us confidentially about abuses in DCF please email valleypatriot@aol.com

DCF Disgrace in Methuen ~ What is DCF Costing Methuen Taxpayers? added by Tom Duggan on May 15, 2017
View all posts by Tom Duggan →