By ValleyPatriot on May 1, 2017Comments Off on Defending Immigrants from Perceived “Racism” 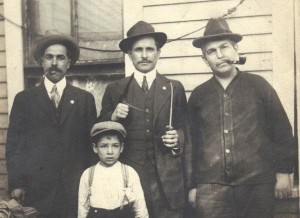 I’ve read with interest, the onslaught of negative comments on the pages of the Valley Patriot, and on your Facebook feed, regarding the treatment of immigrants in the Merrimack Valley, particularly Lawrence. These racist comments have become more and more aggressive of late, and I must respond. In fact, I’m a little amazed at these negative comments, considering the bulk of your readership, come from immigrant roots here in the valley.
I, myself, am a 4th generation Sicilian immigrant.

My great-great-grandparents on both sides came in steerage on little ships from Sicily in the late 1800’s, directly from New York to the great City of Lawrence the ‘Immigrant City’, to work in her mills. My father, whose own father died when he was a child, started off at probably 12 years of age, working in those same mills, as a hand, and rose to the esteemed profession of mechanic, before his death from lung cancer, probably brought on by inhaling wool fiber. Immigrants working in the mills, I’m told, got along, mostly. Everyone was here to work, and work they did. Generations of decent tax paying Americans came from those early, mostly peasant, mill workers.

I, myself, grew up in South Lawrence, a Sicilian kid among mostly Irish families. By 1960-1970, the Irish and the Italian kids got along with each other. I went to their parties, parades, weddings, baptized their kids, and dated their men. Even today, I insist on eating corned beef and cabbage on St. Patty’s Day in honor of my Irish friendships. Our parents didn’t get along so well. My mother wasn’t so keen on my Irish buddies; didn’t trust them. I know for a fact some of my Irish friend’s parents still held a grudge, too. Heck, my own family story included a tale of my Sicilian uncle being stabbed in a knife fight on the duck bridge by the Irish gangs in the 1930’s, and I won’t say he didn’t ask for it! But these grudges were nothing serious, not like today, not like the hatred among the races that we see today…

Of course, we had something back in the 60’s, which is lacking today. We still had jobs and a decent economy around here back then. Our families weren’t fighting over the few remaining jobs at Raytheon and the IRS, and there wasn’t resentment over the lack thereof. We still had Western Electric, Honeywell, some of our mills were still operating, many other big employers in this area provided good paying, plentiful jobs. Our families weren’t squabbling with each other over a few employers, and we weren’t getting resentments over perceived affirmative action hiring. Yes, things were different back then economically, and that difference is critical, and often overlooked. The Merrimack Valley looked a lot different back then, and it wasn’t all about the color of the resident’s skin.

Your readership tends to blame the immigrant. They blame the very same type of individuals as their grandparents were, seeking the very same American Dream. Has your readership forgotten, or never heard stories of their own ancestry living in crowded tenement houses in Lawrence, along with the bedbugs and rats? Have they forgotten or never heard, stories of, or, worse, tried to forget, the stories of their own family struggles to be accepted, as immigrants, by America? Are the stories of Nanoo the “bookie” quaint now, versus criminal? Drunken husbands, wife beaters, men that abandoned their children, corruption in City Hall, are these stories funny now, with the passage of time? All these things happened in Lawrence’s history, all perpetrated by white immigrants, all happened more than once.

It is the due course of the City of Immigrants. It did not start today, it will not cease if you dispel your target immigrants tomorrow. It is the ongoing process of new immigrants becoming Americanized in the melting pot that is Lawrence.

Your readership would do better to turn their considerable energy to the lackluster government who continually lets them down. This government has failed to provide this area with the economic improvement that it had been calling for and desperately needs for a generation. Ask your Federal and State governments to quit outsourcing your manufacturing jobs overseas. Refuse to purchase Walmart goods. Bite the bullet and crease buying Chinese-made items. That would be a constructive use of your readership’s time, rather than turning on the fellowship of Valley residents that live among us and will be part of our future.