By Dr. Charles Ormsby on August 13, 2013Comments Off on Detroit, USA: A Monument to Democrat Policies 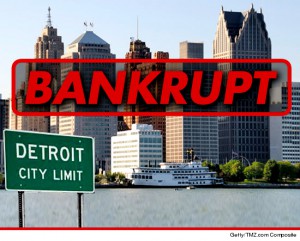 Detroit has imploded. Like the giant oak whose innards were consumed by thousands of termites, Detroit has finally collapsed. Its productive core can no longer support its own weight.

The Democrat Party and its allies in big-government unions should be congratulated. Their criminal thievery, made technically legal because it was executed through the auspices of government, has finally succeeded in bankrupting Detroit.

In the 1950s and early 1960s Detroit was on top of the world after being led by Republicans for forty four of the previous fifty years. Detroit was home to the three largest automobile manufacturing companies in the world and an entire second tier of parts suppliers, paying some of the country’s highest wages to industrial workers.

The last Republican Mayor of Detroit, Louis Miriani, left office in 1962 and the Democrats have been in charge ever since. Miriani’s successor, Jerome Cavanagh, embraced government-sector unions and the big-government programs coming out of Lyndon Johnson’s Great Society and his War on Poverty. Half a billion dollars flowed to Detroit in an attempt to make a nine-square mile section of Detroit a Model City. Cavanagh also introduced a commuter tax and a city income tax.

Cavanagh replaced free markets with socialist central planning. Private property rights were disregarded in favor of government re-distribution. The destruction of Detroit was off to a fast start.

Six more Democrat mayors have followed in Cavanagh’s wake, all embracing the statist policies championed by the Democrat Party. Of course corruption was not far behind. Padded government payrolls and sweet heart union contracts, all supported by rising taxes, was the constant prescription of the Democrat party. Detroit took the Democrat poison for 50 years and now the consequences are evident for everyone to see.

Detroit has been sacked by the Democrats.

Detroit is an unmitigated disaster! It is now $18 billion in debt and it has been reduced to a third world city. Many of the victims of Detroit’s statist policies have fled, thus the population decline, and they are prospering elsewhere. Congratulations to them!

Those who were on the gravy train, the looters, have remained, and they are getting what they deserve. These looters, led by Detroit’s government workers and welfare moochers, along with those lenders that facilitated Detroit’s reckless fiscal behavior, Detroit’s bondholders, will be getting the shaft.

Reality has come home to roost. But will we learn from Detroit’s example or will we merely repeat it on a national scale?

It took fifty years for Detroit to be transformed from prosperity to poverty. Could the Democrats have delayed Detroit’s collapse?

The free market doesn’t disappear when the government passes laws or develops regulations that abridge private property rights. Productive economic activity either operates in the gaps between these laws and regulations, where sufficient freedoms still remain, or it picks up and moves to freer pastures.

In most totalitarian societies the gaps are too small for free markets to function and the market forces that encourage productive behavior disappear, leading to abject poverty and even starvation. But Communist governments survive longer than one might expect because they erect walls to keep their people from leaving. Slaves in Soviet Russia had few alternatives but to find some way to survive.

Maybe Detroit should have a wall to keep its citizens from leaving! Certainly, the good of the community would justify such a policy. How dare those productive people leave Detroit and neglect the needs of the moochers! Don’t they know that people have a right to jobs with above-market wages, 35-hour work weeks, 6-week vacations, and family leave? And what about guaranteed early retirement, free education, free healthcare and, if you prefer relaxation to productive effort, a no-show government job or a steady stream of EBT cards?

Clearly those that have abandoned Detroit have violated the human rights of the needy. It is time to force everyone that has lived in Detroit during the last 20 years to return. Then put up the wall and bring out the whips. It is time to give the Democrat’s philosophy a chance to work.

It worked for East Berlin … why not Detroit?