By ValleyPatriot on June 29, 2018Comments Off on Diehl Promises to Help DayBreak Shelter in Lawrence

“Warren has ignored the poorest of the poor here at Daybreak”

Last month we learned that United States Senator Elizabeth Warren – who is running for reelection – has never toured the Daybreak Homeless Shelter in Lawrence. She was elected in 2012 promising to care about the poor, but with Lawrence being one of the poorest communities in New England, and Daybreak servicing the poorest population in that community, you might think that Warren would have not only been to Daybreak but would be one of Daybreak’s biggest advocates.

She hasn’t and she’s not.

According to the people at Daybreak, Senator Warren has done nothing to help them get the funding they need to address the homeless population in Lawrence and she has never even called Daybreak to find out what programs they offer or what she can do to help.

So, it was no surprise earlier this month when Republican Geoff Diehl decided to take advantage of Warren’s lack of interest in helping the homeless in Lawrence.

Diehl toured the Daybreak Shelter because, he said, he wanted to find out what they deal with every day “with the poorest of the poor” and talk about their funding crisis that other elected officials have largely ignored for years.
“As for funding, what exactly do you need,” Diehl asked Carina Pappalardo who oversees Daybreak.

“Five to ten million for a new facility, and a few million more for operating costs.”

EDITORS NOTE: Daybreak is not a free-standing building; it is constructed with four trailers that have been welded together.

“We are at capacity every night servicing 50-55 guests and as you can see this is very tight quarters. The dorms are very small. We have very little room, and we have to have the guests eat in shifts because there isn’t even enough room in the eating area [for everyone to eat at once].”

“It’s the funding and it’s the building. I mean we can take a quick tour and you really don’t have to take too many steps to get a full tour of this space. It’s like you turn left and right, and do a full circle and you’ve seen it all. We have 35 men in one dorm and 15 females in another, and there’s not a lot of room for the case management to happen. So, it’s the space that’s needed so that we can continue with the foundation of the shelter beds.” 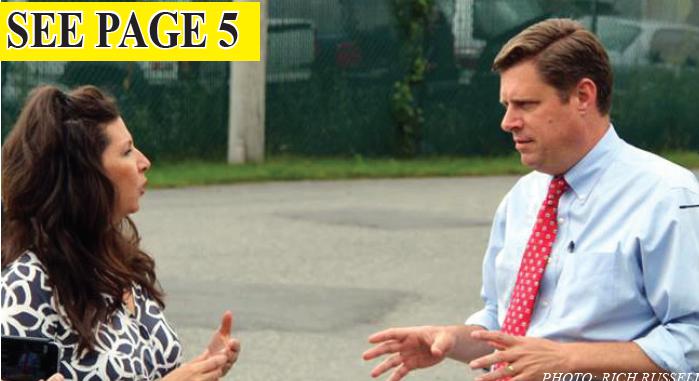 Pappalardo said they also need a program for transitional living where they “can get a step up within our own agency and we can still support them through that case management. They need more independence living out on their own and having that dignity of having a home to call their own.”

The Valley Patriot asked Diehl after his tour of the shelter: “Elizabeth Warren has never come here and the other politicians who do come to Daybreak come for a photo-op for their campaign and then they leave and don’t do anything to help. Why are you different?”

“Well, I’ve been to Lawrence several times now, and this is the first time coming to Daybreak to tour the facility, but I promise you it will not be the last time I come here to Daybreak. That’s before the election, and even after the election. When I’m your next U.S. Senator I expect to be in Lawrence on a regular basis, monthly if not more than that. Look, we have to make sure we tackle the big problems that our state has and Lawrence has as a city. We can’t just put the bad news in the paper and walk away. We actually have to find the good news like what’s happening at Daybreak and promote it and make sure we expand these programs and that we can federally. That’s the kind of work that I want to do and it’s the kind of work I guarantee I will do once I become your next U.S. Senator.
VALLEY PATRIOT: “Republicans are not exactly known for tackling the homeless issue, what made you want to do that.”

“When I first got into office in 2010, one of the things I never expected to be a big problem was the foreclosure crisis with the economic meltdown of 2008-2009. I ended up getting involved with a lot of families that were losing their homes or on the verge of losing their homes. Home is where your dreams start. Home is where your family finds refuge and you have the ability to start each day fresh and try to do what you want to accomplish in life. We have to make sure people who are homeless are first of all given immediate shelter and then find long term solution for them. It shouldn’t be a partisan issue. So, I’m going to be working for the folks here at Daybreak and facilities like it across the commonwealth for the long term.”

Diehl said that Senator Warren has been ignoring the “drug epidemic plaguing our communities”, adding that the drug epidemic is a crisis.

“There’s no other word than crisis to describe the misery, the loss and the devastation that is overwhelming our families due to the drug epidemic,” Diehl said.

“As your next senator, I will commit to fighting this epidemic every single day.”

Diehl unveiled his plan he called “HOPE” to tackle the opioid crisis.

“Plans matter, Elizabeth Warren has gone to Washington with no plan. What’s worse, she voted against a bill that won the support of other Democrats in the Massachusetts Delegation, ‘the 21st Century Cures Act’ that supplied Massachusetts with $12M for treatment and prevention of opioid addiction.”

“She not only failed to vote for it but actively lobbied against it. Now I’ve done the hard work of listening and paying attention. As a U.S. Senator I will continue to be on the streets with law enforcement so that I can make informed and tough decisions to turn back the drug flow. Warren is not paying attention. Posting tweets and Facebook messages against the president is not a plan. Already as a state representative I have supported legislation that strengthens prescription drug trafficking laws, increases beds for treatment, and supports screening to identify those at risk. Next, as your U.S. Senator I will continue that progress.”

Diehl promised to increase access to treatment “that has proven affective, timely, well-regulated and at a cost that is affordable to families to seek help.” he also said he will increase the number of in-state treatment and detox centers, not just in gateway cities, in order to keep families close by. He supports increased funding for walk in consultations “that can take advantage of moments of readiness, much like what goes on here at Daybreak.”

He also promised to support an increase in funding for opioid addiction clinics in our commonwealth and nationally. Seek funding for chronic pain management alternatives, aid physicians in not over prescribing opioids, and called for a maximum life-sentence for traffickers found with over 30 kilograms of opioid substances in their possession.
* Daybreak is one of only two homeless shelters in the state. But, they are not just a shelter. Daybreak offers financial counseling, helps people get disability, get into detox, and helps them get job training once they qualify. Daybreak also accepts guests who have no ID and will assist those who show up on their doorstep to get an ID if they don’t have one.

Daybreak is located at 19 Winter St., Lawrence and accepts donations. Each year Carina Pappalardo has to hold private fund raisers to keep Daybreaks doors open because the money she receives from the state isn’t adequate and state officials are only paying lip service at election time but never really do anything to get them the real financial assistance they need.