By ValleyPatriot on July 28, 2016Comments Off on Disparity in Health Care Costs and Services 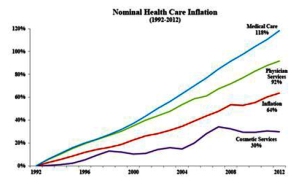 Here’s why you should care, and care A LOT, about health care costs:

Massachusetts has the highest healthcare costs in the world. No place else spends what we spend per capita on health care and it affects every part of our lives. We’re in the process of writing our next state budget and health care will devour about half of our state’s $40 billion budget. This will crowd out all other spending on roads, bridges, schools, veterans, seniors, colleges and universities. In the private sector these high costs will prevent small businesses from giving raises and bonuses, or prevent them from expanding and hiring more workers. It may even preclude companies from coming here in the first place.

There are dozens of reasons why our costs are so high including such things as malpractice laws, obesity, drugs, violence, immigration, and the inefficiencies created by government regulations. One could also make the case that our spending is so high, in part, because we’re a wealthy state in a wealthy country, so we therefore have a lot of people willing and able to spend a lot on health care including such things as cosmetic surgery and dentistry.

Speaking of cosmetic surgery, it’s interesting and telling that it has not gone up in cost nearly as much as other health care, as this chart on Nominal Health Care Inflation shows.

Fittingly, a hot topic right now is the huge disparity in certain health care services. For instance, in central Massachusetts the price of arthroscopic knee surgery can range in price from about $3,000 to over $20,000. The price of a hip replacement can vary by over 300%, from $17,000 to over $73,0000. Even the price of something as routine as an MRI of the knee can range from $322 to as much as $4,008. These price variations exist even though there is no discernible benefit or advantage to seeking the higher priced care. Study after study shows that the outcomes in our lower priced community hospitals are similar to those in our expensive teaching hospitals.
Speaking of those higher priced teaching hospitals, Partners Healthcare was created in 1994 with the merger of Massachusetts General Hospital and Brigham and Women’s Hospital.

Since then they’ve acquired several more area hospitals and now, since they have such a huge market share, every health insurance plan needs to include them in their network, despite the exorbitant prices they charge, because insurance buyers will insist on it.

Clearly what needs to happen is that choices in health care services need to be made by consumers who are armed with all appropriate information, which is something we’re working on with increased transparency in hospital costs. But transparency alone won’t lead to more economical choices so long as “someone else” is paying the bills.

The medical industry sort of reminds me of where the taxi industry was just a few years ago before companies like Uber and Lyft came in and “disrupted” the market. Those of us old enough to remember will recall beat up old cabs with no A/C and surly drivers who behaved as if they didn’t have to care about customer service because they didn’t. They would likely never see passengers again and there was no rating system like Uber and Lyft have.

They would “take us for a ride” in more ways than one with circuitous routes and credit card machines that would mysteriously stop working so they had to be paid in cash.

Quality was low and prices high despite government doing all it could to “protect” us by controlling prices and competition. Thus cab fares are the same regardless of when or where you need a ride and if a Boston cab drops a rider off in Cambridge he has to return to Boston empty because he’s not allowed to pick up a fare outside of Boston. It’s been like this since medallion laws were instituted during the Great Depression when “too many” people tried to make a living offering rides, so we’ve accepted it, since that’s the way it was in every city, state and country. Good luck complaining about it.

The medical industry is under similar market crushing constraints; we don’t even allow a new hospital to open, or an existing hospital to expand, unless they’re granted a Certificate Of Need (CON) by a government that still believes it can “protect” consumers from too much competition. At some point, we’ll have to reach the realization that only free market forces can bring down medical costs, and that means allowing consumers, not government, to make rational choices about where their dollars are spent. Failure to control these costs will continue to crowd out all other spending and result in government becoming little more than an insurance company with an army.