By Tom Duggan on May 15, 2016Comments Off on Dominicans in Lawrence Vote for Dominican President, Show ID to Vote and say Voter ID is “Not Racist”

LAWRENCE – The gymnasium of the old high school on Haverhill St. was filled to capacity Sunday afternoon as Dominican citizens who live in the City of Lawrence, Massachusetts turned out in large numbers to vote for the next Dominican President.

Dominican citizens who have dual citizenship with the United States are allowed to vote in both countries’ elections.

The line of people waiting to vote outside started at on Amesbury St., and snaked down to Lebanon St. to the back doors of the old Lawrence High School. There, they were met by campaign volunteers from the various campaigns, handing out literature for their preferred candidate, and talking to voters one last time before they went inside to vote.

Once inside the back lobby, the line continued up a flight of stairs to the doors of the gymnasium. By that point, voters could finally see the end of the line,  where each voter was asked to register and show their government approved Voter ID before they could cast ballot.

Did you have to show an ID to vote today?

“Yes,” said Ruben Perez of Lawrence. “In Dominican (elections) you need a voter ID, but I think I forgot mine in my car so I have to go back,” he said laughing while he padded his pockets down searching for his ID. Ruben had waited in line at least an hour just to get to the doors of the building.

Asked if he thought it was racist for Americans to ask for an ID to vote, he said it wasn’t racist at all. “I think it’s better with an ID. It’s better because you can only vote one time, you don’t have a chance of voting again.”

Lawrence City Councilor (District-D) Jeovanny Rodriguz said he had to show an ID to vote and doesn’t understand why the United States elections don’t allow it.

“There are some differences between the Dominican Republic elections in the voting process. You have to show an ID. If you are not registered to vote you can register right here, same-day registration, and you need to use your fingerprint to register to vote. If you haven’t registered before, you come over and put your fingerprint on the computer screen, they find you in the system, and then they allow you to go ahead and register and vote.”

Does that cut down on voter fraud?

“Yes, also another difference between the Dominican Republic voting and American voting, is that they actually mark you,” he said pointing to the purple ink on his finger.

“This is the proof. So, that means if you have the ink on your finger you cannot vote twice.”

QUESTION: When Americans want to have Voter ID in any city in America, including here in Lawrence, we are told that it’s racist, that minorities cannot afford Voter IDs, and yet I see everyone here is holding a voter ID.

“To me it’s not (racist). It’s just another way of showing who you are. Maybe for other people at another time, maybe they can say voter ID is racist, but for the Dominican people it’s not. For most Lawrencians, most of the people that live here that are from the Dominican Republic it’s not. In the American elections they actually show up with licenses expecting to show their ID (to vote). That’s the way they show who they are. Particularly, I do not see how that’s racist.”

Of the dozens of people interviewed in Lawrence, only one showed resistance to requiring Voter ID in American elections, Lawrence School Committeeman Pavel Payano

“If you ask most people here in Lawrence, most Latinos, I don’t think they have a problem with showing an ID to vote because they are used to showing an ID in their own elections. But, one of the issues with the ID Act is that they say that with Voter ID, it’s harder for seniors to vote. It has yet been shown that when you implement an ID that it stops corruption at the polls,” the Lawrence School Committeeman, and former candidate for state senate said.

“You have to pay money to get an ID,” he said. Payano also added that Dominican voters used to have to go into Boston to apply for a voter ID, but the Dominican consulate now sends people to Lawrence to help them sign up before elections to get an ID to vote.

As Payano was speaking an elderly gentleman came out of the building after voting.

“We’ve been joking about that today,” School Committeeman Payano said.

“Besides your paper and a few others, there aren’t really many media that says what’s happening on the day-to-day basis in Lawrence,” he concluded.

“We talk about Dominican elections every day, every day. Even the day after the election the Dominican people [are] already talking about the next election. And the candidates are calling people, they campaign in Lawrence. Dominican elections are like a carnival…  when it’s election day everyone gets excited.”

“I don’t understand why, because [Dominican] people have a passion for voting” City Councilor Jeovanny Rodriguez said of the low Dominican turnout in American elections.

Rodriguez was elected on a write-in campaign because there were no candidates in his district to fill the District “D” seat on the Lawrence City Council.

“In the Dominican Republic there is a tradition of voting, and the Dominican people love to vote. I don’t know why there’s such a low turnout for the Lawrence elections. There are so many Dominicans here in Lawrence that can go vote and, I don’t understand why.”

In August of 2014, at the height of his reelection campaign, Massachusetts State Representative, Marcos Devers, a Democrat and a Dominican citizen, made Voter ID a main platform of his campaign, saying it was not “racist” and that voter fraud does indeed exist. (STORY HERE)

“I am for Voter ID, it’s a matter of transparency”, Devers said at the time.

“I am on the Black and Latino Caucus in the legislature and I have told my colleagues, I am from Lawrence,  I have seen the voter fraud that goes on at election time, and we need Voter ID. I love my party but this is where we part. Voter ID is something that will make sure the fraud we have seen in Lawrence in recent years doesn’t happen anymore.”

Devers isn’t the only Latino in Lawrence who supports Voter ID, and has seen voter fraud in the city. 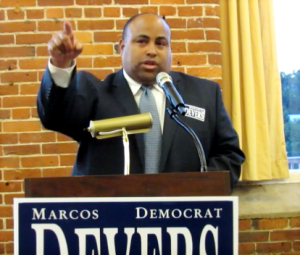 Lawrence Mayor Dan Rivera who is half Dominican and half Puerto Rican also supports Voter ID.

A year after defeating former Mayor Willie Lantigua, Rivera told Valley Patriot publisher Tom Duggan on his weekly radio show that not only does voter fraud exist, but he has experienced it firsthand and had to enlist the help of the entire Democratic Party in Massachusetts to descend onto Lawrence to makes sure Mayor Lantigua “doesn’t cheat this time.”

“I think we definitely need Voter ID, it’s for everybody,” Rivera said on the radio program in 2014.

“And if there is an elderly person who doesn’t drive, we have to find a way to help that person vote. There’s no reason [why we can’t]. I mean we put a person on the moon. We have phones that you can use without wires. We can figure out a way so that we can know who’s voting, and this is a process we can all feel good about.”

“If there is no voter fraud, why did the entire [Democratic] party in Massachusetts have to come to Lawrence to make sure Lantigua didn’t cheat,” Democrat State Rep. Frank Moran of Lawrence (who is also Dominican) asked at the time.

“If we needed that many people to stop the fraud then it’s pretty obvious we need voter ID.”

Dominicans in Lawrence Vote for Dominican President, Show ID to Vote and say Voter ID is “Not Racist” added by Tom Duggan on May 15, 2016
View all posts by Tom Duggan →