By Tom Duggan on August 25, 2015Comments Off on Dr. Gomer Turns Eyesore in Lawrence Into Jewel of the Neighborhood 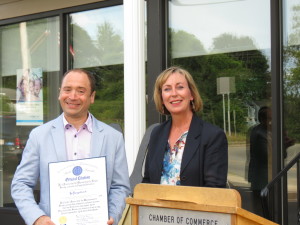 After a year of construction work, Dr. Gomer finally announced the opening of his new location for Mount Vernon Dental Solutions. The new dental office was built in place of an old Julie and Wendy’s convenience store that was abandoned for a long time.

“Every time we [elected officials] go to speak, we say ‘it’s an honor to be here’, Mayor Rivera said. “But, here specifically, it’s an honor to have a piece of development in what I consider one of our premier neighborhoods … where you can have a place that has been blighted for such a long time, be brought back to life.”

“People spend a lot of money on their properties and when their families would come and visit them, they would have to come by this awful looking place. The ironic part is that it went from a place that you used to get cavities from, a candy store and an ice cream store, and now it’s a place where they fix your cavities,” he said laughing. 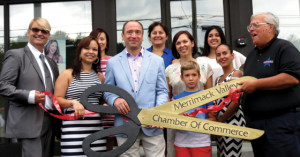 “The renovated building and parking lot makes the Lawrence gateway look so much better.”
“Honest to God, the way this makes the neighborhood look, it makes everybody’s property values go up.” Rivera thanked Dr. Gomer for putting so much money into the project and helping to beautify the city.

Mayor Rivera then presented a citation to Dr. Gomer as did State Representative Devers and Moran. 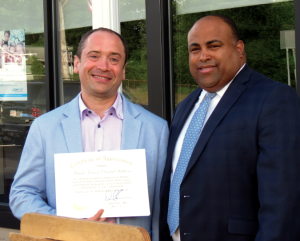 “The building is really beautifully done, I’m really proud of what you are doing for the city. I remember when this was an ice cream stand in the late 60’s, early 70’s … I used to come here after fireworks and get ice cream,” said State Senator Barbara L’Italien (D) Andover.

The history of this property started in 1910, when it was built as a potato chip factory on the Andover line. Going through several owners and a fire, it was a Fairview Farm, ice cream shop, and lastly Julie & Wendy’s convenience store, as it was remembered by the most of the current neighbors.

Unfortunately, in 2006, after several decades of serving the South Lawrence community, the store was closed for good and listed for sale. Slowly, decayed due to lack of maintenance, the building became less and less attractive, bringing the image of the whole area down and making the separation between Lawrence and the neighboring Andover even more obvious.
That changed in 2014, when an offer to purchase the property came from local dentist, Dr. Mikhail Gomer, who has been practicing dentistry in Lawrence since 2006, and wanted to move his dental practice to a more convenient location.

“At the zoning board, not only did nobody oppose it, but also a group of people came to support Dr. Gomer,” said Michael Sullivan, a realtor and former mayor of Lawrence.

Dr. Gomer completely rebuilt the property turning the remnants of the convenience store into the modern dental practice.

“I am committed to serving this community as a health care provider and as a citizen. I am sure that this investment will improve the image of Lawrence and will make the area more attractive for businesses and residents. But this could only happen because of tremendous support from the community and the city officials.” said Dr. Mikhail Gomer.

Dr. Gomer started his career as a dentist in Ukraine in 1996. In 1999 he came to the US and confirmed his dental degree in Tufts Dental School. In 2006 he opened his private practice in Lawrence, MA, where he has been providing dental services ever since. Dr. Gomer’s motto is “Gentle care from knowledgeable dentist, who will listen to your concerns and explain your options”. To do this Dr. Gomer and his staff take time to get to know their patients and learn what they need and what is important for them. For more information visit HERE or call (978) 682-0641

Dr. Gomer Turns Eyesore in Lawrence Into Jewel of the Neighborhood added by Tom Duggan on August 25, 2015
View all posts by Tom Duggan →