By John MacDonald on August 21, 2017Comments Off on Duggan, McPhee, Diehl, Carr & Ligotti to Headline Veteran Rally & Battle of the Bands Aug. 26 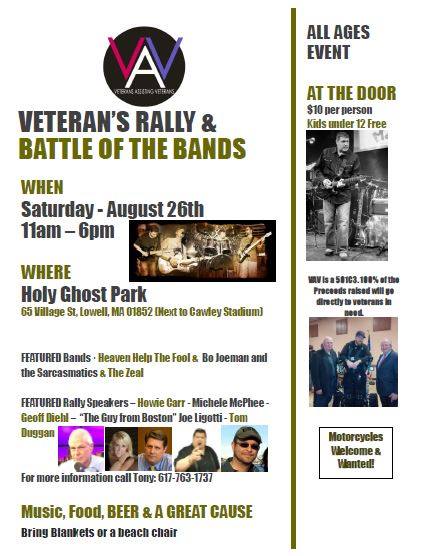 On Saturday, August 26th from 11am to 6pm, Veterans Assisting Veterans (VAV) will be hosting its very first Veterans Rally and Battle of the Bands. The event will be held at Holy Ghost Park in Lowell, MA at 65 Village Street, right next to Cawley Stadium and off 495. Holy Ghost Park can accommodate thousands… and thousands of people is what is expected as the organizers of VAV Veterans Rally and Battle of the Bands have organized one heck of an event.

At 11am the Battle of the Bands will start and run until 2pm, when a break from the music will usher in an hour-long Veterans Rally. The Rally will feature some tremendous radio talent from around Massachusetts. Headliners are Howie Carr, Michele McPhee, “The Guy from Boston” Joe Ligotti and the Valley Patriot’s Tom Duggan. In addition, Candidate for US Senate and longtime veteran supporter, Geoff Diehl, will be addressing the crowd.

Before and after the Rally, attendees will be treated to some really great bands. “Heaven Help The Fool”, “Bo Joeman and the Sarcasmatics”, and “The Zeal” will be playing and rocking the crowd. Some of the band members of these groups are veterans themselves and have often been the opening acts for major bands and concerts around the country. This is just the venue to see some major bands before they hit it big in the music world.

Admission to the event will be $10 per person. Kids under 12 are free. Attendees can expect to see t-shirts for sale and can participate in a 50/50 Raffle. Beer, soda, and water, along with hot dogs, hamburgers, sausage, pepper and onions will be on hand at an affordable price. Department of Defense – 50 Year Anniversary Vietnam Veteran pins will be on hand and awarded to any Vietnam Veterans that attend the event. In addition, a bevy of Veteran Service Organizations will be on hand and manning tables for those veterans curious about services available to them.

VAV is 100% volunteer and 100% of the proceeds raised at this event will be donated to Ironstone Farm in Andover. Ironstone Farm administers a PTSD equine therapy program for veterans and First Responders. Ironstone Farm is currently in a campaign to complete the funding for a new field house that will allow the families of veterans and first responders to stay overnight and enjoy a weekend retreat.

VAV and the Owl Diner helped launch the First Responders Program. The PTSD program is free of charge to veterans and first responders.
Motorcycles and motorcycle groups are welcome to the event. Questions about the event can be directed to Tony Palmisano at 617-769-1737. Corporate Sponsorships are available. Also, check out the latest updates of the Rally (which will be rain or shine) on Facebook/VeteransAssistingVeterans.