By ValleyPatriot on November 1, 2011Comments Off on Economics 999 at New Hampshire presidential debate 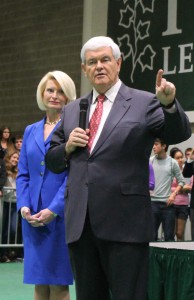 A sharp, polished, unflustered, thorough Romney was the – or at least a – debate winner according to most pundits. In response to a question posed by Cain on whether Romney could name all 59 points of his economic plan, a composed Romney asserted, “Simple answers are always very helpful, but often inadequate.” Cain is running on a “999 Plan” that was the focal point of much of the debate. It calls for scrapping the Internal Revenue Code and replacing it with a nine-percent federal flat income tax, nine-percent corporate tax, and nine-percent national sales tax. Romney classified the 999 Plan as a tax plan and said that a president needs to have more than tax and energy policy, the latter referring to Perry’s domestic energy initiative and both of which are topical components of Romney’s more comprehensive proposal. U.S. Senator from Ohio Rob Portman – a Dartmouth alumnus and former Director of the Office of Management and Budget and U.S. Trade Representative – told Bloomberg Television that he likes Romney’s “very specific” plan, though he has not endorsed a candidate. “[Romney’s] got more pages of policy than anyone out there right now.”

Cain defended the 999 Plan as bold, simple, fair, efficient, transparent, and revenue neutral. It was subject to jokes by Huntsman (first thought it was the price of a pizza) and Bachmann (flip it upside-down; devil is in the details) and an audience poll by Santorum to show that voters in no-sales-tax New Hampshire would resist a 9% national sales tax and any new taxes ripe for raise by Congress.

Perry, critiqued for stumbling and fading in earlier debates, started slow and meandered. He focused his debate performance on teasing a domestic energy plan to be unveiled three days later in Pennsylvania.

Huntsman invoked the political sideshow of the week, a Perry-supporting pastor who called Mormonism a cult in a candidate introduction, and joked that he would not make Romney’s faith an issue. Huntsman, like Romney, is a member of the Church of Jesus Christ of Latter Day Saints. The audience was delayed and tepid in its response, likely, in part, due to limited familiarity with Huntsman’s biography. On economic priorities, Huntsman said the U.S. needs to regain its industrial base. To stay ahead of China and India, the U.S. must maintain a strong commitment to innovation and entrepreneurship and improve “freedom in the marketplace” by reforming taxes and regulations.

Paul noted “some inroads on the Federal Reserve,” the central banking system long excoriated by the Congressman. Legislation sponsored by Paul last year affected “a partial audit of the Fed,” from which we’ve learned a whole lot. They were dealing in $15 trillion; $5 trillion went overseas to bail out foreign banks.” Paul credited Bloomberg and Fox with helping bring about transparency with Freedom of Information Act requests and legal actions.

Santorum discussed a tongue-in-cheek-titled zero-zero-zero plan that would eliminate corporate taxes on manufacturers, allow tax-free repatriation of foreign capital, and repeal all Obama administration regulations. He said the U.S. should strive to outgrow China economically, even using “go to war” language. A late debate point on the connection between nontraditional family structures, values, and poverty earned kudos in a Union Leader editorial and a National Review magazine editor Rich Lowry tweet.

Gingrich continued his ‘team player’ approach, complimenting his Republican friends with the stated priority of defeating President Obama in the 2012 general election. Earlier in the day, in a Main Street, Hanover interview, Gingrich praised the public policy research of recently announced Nobel Prize economists Christopher Sims and Thomas Sargent. The history PhD, who taught at West Georgia College and continues to teach at the National Defense University, asked about other indispensable economics sources, replied, “All modern economics starts with Adam Smith’s Wealth of Nations and Theory of Moral Sentiments. You have to read both.” Gingrich often refers audiences to his 21st Century Contract with America, a platform and set of legislative proposals and executive orders available for download at Newt.org. Suggestions and proposals for the developing Contract are welcome; Gingrich emphasizes that reducing government will necessitate “growing citizenship.” He distinguishes an Obama agenda of “bureaucratic socialism” from American exceptionalism and free markets.

Bachmann touted her credentials as a former federal tax attorney and small business owner. Bachmann and her husband, a clinical therapist, own a two-office Christian counseling practice in Minnesota.

Democratic National Committee Chairwoman U.S. Representative (Florida) Debbie Wasserman Shultz spoke before the debate to a New Hampshire Democratic Party gathering at the Hanover Inn. She appealed for activism in support of President Obama’s reelection. On her House colleagues from New Hampshire, Charlie Bass and Frank Guinta, the former returning to Congress and the latter winning a first term in 2010, she said they have “done the bidding of the country’s most fortunate.” Obama, on the other hand, is “on the side of the Occupy Wall Street protesters.” After the debate, Wasserman Shultz told me Republicans’ disregard for the value of regulations – from environmental to financial – was “basically allowing the fox to guard the henhouse.”

Dartmouth Professor of Government Linda Fowler suggested the candidates have not campaigned more in greater Hanover strategically, perhaps because they think the area is too liberal. A state representative for Hanover proudly declared his district the most Democratic in New Hampshire in his introduction of Wasserman Shultz.

Dartmouth senior Sterling Beard – editor-in-chief of the independent, conservative Dartmouth Review and a modified history-government major from Abilene, Texas – remains “very much open-minded” about the race. He has not ascertained a favorite candidate among his newspaper staff members or the student body at large. “It’s a wide open melee. Who knows who will get the youth enthusiasm?” Beard said students are more concerned about the job market and their individual employment prospects, though he did note a number of 2008 Obama voters have whispered to him that they will not support the president again due to his failure to deliver on jobs.

Dartmouth Professor Andrew Samwick, who served as Chief Economist on President George W. Bush’s Council of Economic Advisors, opined, “Grading on a curve, Romney wins.” Samwick, who also serves as director of the Nelson A. Rockefeller Center for Public Policy and the Social Sciences at Dartmouth, explained, “On exams I give, you have to answer the question I give you.” In a debate, unlike a college test, Romney was wise not to “take bait” and, rather, to present his message. Samwick was generally impressed with the other candidates holding their own.

Paul’s New Hampshire Campaign Chairman, State Senator Jim Forsythe, recalled it was “mainly economic issues” that first interested him in Paul, whom he learned about while serving as an Air Force pilot in the former Soviet Union. In addition to Paul’s advocacy for free markets, his foreign policy – “not anti-war…noninterventionist” – resonated with Forsythe.

When I advised that, like Romney, he was vying to become just the second president with a master of business administration degree, Santorum reflected on the skills he gained in business school: “how to analyze problems, selling, accounting, management.” Santorum said he applied these skills to his private law practice before his elected public service. He noted low staff turnover in his Senate office, which he attributed to “hir[ing] the best, get[ting] a lot out of them,” and motivating and inspiring his team.

Gingrich, joined by his wife Callista, followed Bachmann and Huntsman in addressing students at an overflow debate watch party in Leede Arena. Gingrich, who has been leading with ideas, is growing his organizational presence in the state. Gingrich’s press secretary, R.C. Hammond, said the campaign is going to open offices by the end of October and “will have a sign for every lawn.”

Dave Carney, Perry’s chief strategist and a Hancock, New Hampshire resident, talked down debate expectations and significance. “It’s a long campaign. Debates are important…to some extent.” He defended Perry’s performance as “solid, very competent,” and said, “We want to get better every day.” Carney spoke of Perry’s forthcoming energy plan as a fast job creator and credited Perry with knowing the name of Romney’s economist, jabbing Romney for blanking on it. Perry visited a debate watch party at Beta Theta Pi, a Webster Avenue fraternity with a conservative reputation. Politico’s Maggie Haberman relayed a Twitter report from Lindsey Boerma of CBS News and National Journal that Perry told reporters after the Beta stop, “I just try to get up every day and do my job, and debates are not my strong suit.” Earlier in the day, pledges of the Alpha Chi Alpha fraternity were on a rush mission for photographs with candidates. Three pledges successfully obtained a photo opportunity with Gingrich, and “bonus points” were available for a photo with Santorum.

Former New Mexico Governor, construction entrepreneur, and adventurer Gary Johnson was the odd man out. Literally. In the post-debate spin room, I spotted printed material for a ninth candidate placard for “Johnson.” Brinck Slattery, Johnson’s New Hampshire State Coordinator, thought Johnson could have brought “real-world business experience” to the debate, distinguishing his private sector experience from that of Romney and Huntsman. “Running a huge corporation is a lot more like working for government.” On the day of the debate, Johnson completed a seven-day, 500-mile bike ride through New Hampshire with scattered campaign stops.

Veteran campaign operative and gay activist Fred Karger of California campaigned on the college green before the debate, where he handed out Frisbees printed “Fred Who?” in recognition of his marginal public name identification. Karger said Dartmouth was “where it all began” for his campaign. After a February 2010 speech to the college’s Gay-Straight Alliance and before a University of New Hampshire visit, Karger decided to run. He has returned to campus fifteen to twenty times, visited classes, and done area precinct walks with volunteers and staff. A first-time candidate after decades of campaign-side work, including for Ronald Reagan, Karger is “just living this dream.” His economic message is one of “bringing back the American spirit of optimism and getting along.” The messenger can be key; Karger said Reagan “talked us out of that [19]81 recession.” Karger mentioned ideas, goals, and approaches, including federal government microloans to small businesses, stopping outsourcing, speeding up the patent process, technical college job training, and encouraging the most basic of entrepreneurship through swap meets.

Diane Bitter, vice chair of the Granite State Patriots Liberty Political Action Committee, thought the next presidential debate in New Hampshire “might be the next and last.” With the multi-state jockeying to hold early primaries and caucuses having seemingly subsided by late October, the GSPLPAC will host the next debate November 10 at Exeter High School with a Constitution theme and a “national media network” partner, to be followed by an ABC News/WMUR-TV debate in Manchester three days before the primary and a NBC “Meet the Press”/Facebook/New Hampshire Union Leader debate in Concord on the final Sunday before the First in the Nation Primary.

Alex Talcott is the public affairs principal of Vaura Consulting LLC and an adjunct instructor of social science at Newbury College.