By ValleyPatriot on January 6, 2023Comments Off on Ed Murphy; Navy Vet, Lawrence Firefighter, Veteran’s Den Band ~ VALLEY PATRIOT OF THE MONTH, HERO IN OUR MIDST 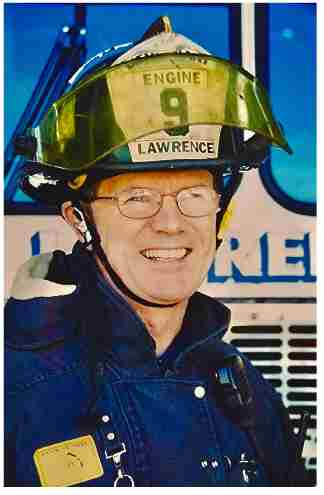 Lawrence’s Ed Murphy grew up in the South Lawrence East neighborhood, living in Veteran’s Housing at the Lawrence Stadium Projects as his dad, Edward J. Murphy was a Navy veteran. He later moved to Bailey Street with his parents and three sisters. He graduated from Central Catholic High School in 1966.

One of his fondest childhood memories was attending the Annual Thanksgiving Day Lawrence vs Lowell Football games at Veteran’s Stadium. The annual game often drew crowds of 12-20,000 fans up until the 1970s. After high school, he attended college for a short time, and then enlisted in the United States Navy.

He served on the USS James C. Owens (DD-776), an Allen M. Sumner-class destroyer. The ship is a United States Navy Destroyer of the FRAM II class, named for Lieutenant James C. Owens Jr., a member of Torpedo Squadron 8 on board USS Hornet (CV-8). Owen’s entire squadron was lost in an attack against Japanese aircraft carriers on June 4th, during the Battle of Midway.

A Douglas TBD Devastator Pilot, Lt. Owens received the Navy Cross and the Presidential Unit Citation posthumously. The carrier, USS Hornet (CV-8), was later lost at the Battle of the Santa Cruz Islands, on October 27th, 1942.

Ed served in the Navy for 6 years, 2 years on active duty and 4 years on reserve duty. He was a Storekeeper Third Class. While his ship was patrolling off the coast of Vietnam, his assignment, during combat, was in the Combat Information Center (CIC). He was loaned to a US Navy Field Hospital at Da Nang, Vietnam for a time.

After serving in the U.S. Navy, he attended University of Massachusetts Lowell where he received a bachelor’s degree in political science and sociology. He played shortstop for the varsity baseball team along with other sports. He later attended North Shore Community College where he received an associate degree in Fire Science.

After graduating, he joined the Lawrence Fire Department in 1976. He served on the LFD with his dad, Edward J. Murphy, for 8 years until his father’s retirement in 1984. Ed recalls carrying a hose line up to the second floor at a fire on Essex Street. He was joined by another firefighter.

As the two huddled together in the smoke and fire Ed yelled “who is behind me.” “It’s Lieutenant Murphy,” the other firefighter yelled. Ed yelled back, “Hey dad it’s me.” The two then went to work and put the fire out. Ed said that he loved the camaraderie and fellowship of the Fire Department especially during his rookie years. Most of the fire fighters in Lawrence back then were World War II or Korean War Veterans and were very capable of mentoring and training young firefighters.

One of the more harrowing events of his career, was being on duty on a hot summer night, August 8, 1984. A confrontation broke out over a broken car windshield, which became known in the media as the “Lawrence Riots.”

The dispute started at the corner of Haverhill and Oxford Streets. It quickly grew into a feud of over three hundred people, who had gathered on Oxford Street. The crowd threw rocks and Molotov cocktails at each other and passing cars. During that five-hour period, guns were fired, many cars were stoned, and at least five buildings were set fire with Molotov cocktails. According to television and newspaper reports the fight turned into a full blown riot. Ed was almost pulled off his fire truck by rioters while responding to these blazes.

Twenty-two people were admitted to local hospitals. No one was killed. The next night, Lawrence police were out in force, with nearly a hundred Lawrence Police Officers on duty, and over fifty additional law enforcement officers from outside agencies. But this time a larger crowd of nearly four hundred rioters used the same means as the night before to incite each other to violence. On August 10th, the city was put on an 8pm curfew. That was the end of the 1984 riots. The City Council declared Lawrence to be in a state of emergency, with Mayor John J. Buckley becoming the city’s sole authority. He declared a three-day curfew, from 8pm to 6am, for the neighborhood known as Lower Tower Hill.

Ed retired from the Lawrence Fire department in 2006 after serving thirty years. In his last three years on the job, he worked as a Fire Prevention officer and Arson investigator. After retiring from the department, he worked in Nashua, New Hampshire as support staff at Keystone Hall, a detox and treatment center serving the homeless and indigent. He enjoyed helping those citizens get their lives back on track. He is now fully retired and finds working with veterans in need as rewarding. Ed has three adult children, two daughters, Shannon, a teacher and Kristen, an RN. And a son Eddie. who works in IT. He also has twelve grandchildren.

Ed plays regularly in the band, “The Veteran’s Den Band,” which is also an Irish band. He sings and plays guitar. He received a Special Service award from the Mass. State Fire Marshall for his song “The Fireman’s Prayer” for which he wrote the music. He has sung this song at the funerals of and Memorial services for firefighters. He has a 9-song cd of original songs that he has written about firefighters which he has sold to folks from Australia to Hungary and places in between. Veteran, Firefighter, Musician, work in the field of addiction, Father, and Grandfather, Ed Murphy is a “Hero in our Midst”!

The Dracut American Legion asks all World War II, Korean War, and Vietnam War Veterans, to call (603) 518-5368 and sign up for an Honor Flight to the Memorials in Washington DC! Veterans of all eras are asked to go the American Legion’s Web site www.legion.org and join the American Legion. Our mission is working with Congress, Veterans, and the Community, preserving our Veteran’s Benefits for future generations and serving all Veterans and their families.

John Cuddy served in the US Navy’s Construction Battalions (also known as the Seabees) after retiring from the US Navy; he earned a bachelor’s in history and a master’s in economics from the University of Massachusetts on the Lowell Campus. He has been employed in Logistics at FedEx for the last 26 years. If you know a World War II, Korean War, or Vietnam War Veteran who would like their story told, please email him at John.Cuddy@Yahoo.com ◊