By ValleyPatriot on November 16, 2012Comments Off on EDITORIAL: Enemies of Free Speech In Haverhill in the name of “Civil Rights – (NOV-12) 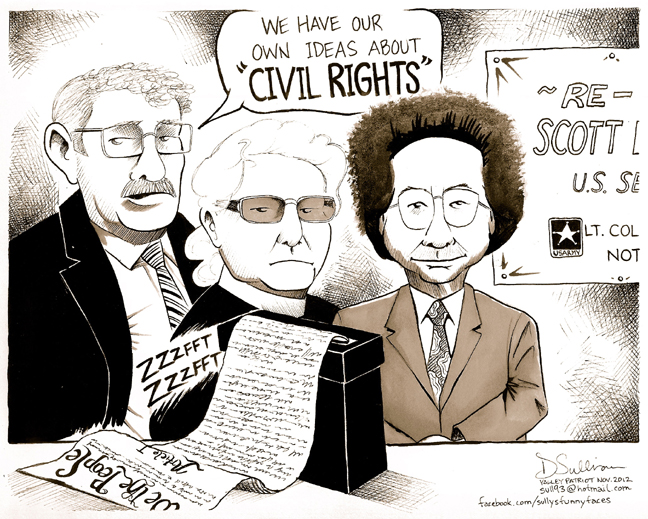 Just days before the 2012 election, members of the Greater Haverhill Civil Rights Commission demanded that a political sign (supporting Scott Brown) be removed from private property because it included the phrase “Not an Indian”. That phrase was clearly shorthand for “Not a fake Indian” or “Not a Native American Impostor” — a reference to news stories that prove that Elizabeth Warren claims regarding her Native American ancestry were nothing more than self-serving lies.

“Civil Rights” members Rabbi Ira Korinow, Rev. Jane Bearden and Dr. Jonathan Miller were featured on the front page of a local newspaper because they sent a letter to the property owner demanding that his sign be taken down.

In their letter they claimed that “The sign implies ethnic inferiority, that Native Americans should not be eligible for elected office and that Native Americans cannot serve in the United States Armed Forces because they are not patriotic.” Their letter further states that “While the First Amendment protects against government suppression of protected speech, it does not provide for the abuse of the amendment when words contain offensive language and convey hate.”

This is the prevailing strategy employed by left-wing fascists who seek to impose censorship by smearing their political opponents with false charges of racism, gender bias (the “war on women”), or hate speech. Just last month our own Dr. Ormsby had to respond to a similar outrageous attack (see our October edition) by leftist professor Gerard O’Connor.

Clearly Korinow, Bearden and Miller are enemies of the Constitution and are traitors to the founding principles of this nation. Their efforts should not go unchallenged and their accusations and demands should not be tolerated since they are nothing more than blatant attempts to suppress freedom of speech.

We find that the actions of Rabbi Ira Korinow of Temple Emmanuel and the rest of his brown shirts at the “civil rights commission” are patently offensive and we consider their letter to be an attack on our human rights; rights that are recognized and protected by our Constitution.

We at the Valley Patriot find it disturbing that Elizabeth Warren lied about being a Native American to advance her career but we are more appalled that our right to freedom of speech is under assault in the name of protecting “Civil Rights.” Of course, the intent of Korinow, Bearden and Miller was not to protect civil rights, it was merely a disingenuous attack on Scott Brown and a ploy to aid their fellow traveler Elizabeth Warren.

Martin Luther King would not support any attack on free speech rights and certainly not a cowardly attack cloaked in malice. The Greater Haverhill Civil Rights Commission should focus on doing their job – protecting civil rights – and refrain from engaging in politically motivated attacks that merely serve to diminish our most important civil right.

Their efforts in this matter dishonor the life of Dr. Martin Luther King and they cheapen the fight for real civil rights by likening a political sign with no hate at all, with repulsive attacks or against others based on race.