By ValleyPatriot on February 24, 2020Comments Off on Eparatodos Entrepreneurship Committee, Shrinking the Gap Between Latino Businesses, the American Market 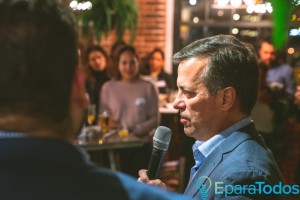 LAWRENCE – For the third time, the EParaTodos’ Entrepreneurship committee, brought a high-profile Keynote Speaker to the city, empowering the local Business Owners & Entrepreneurs through a networking event which took place at Japú Restaurant: with the main goal to assist attendants to expand their social network.

The Keynote Speaker was the Cuban Nelson Reyneri, whom is currently serving as Liberty Power’s Senior Vice President for sales and external affairs. In this role, he oversees the company’s strategy for developing structured solutions to support corporations’ energy and sustainability goals. This includes product development for supply and demand side energy strategies, internal and external business analytics and energy related thought leadership, including engagement with Chief Procurement Officers, Sourcing Professionals, Diversity and Inclusion Professionals as well as Public Service Commissions.

Reyneri also has extensive senior leadership experience in the public sector. In 2016, he was nominated by President Barack Obama to serve on the Board of Directors of the Overseas Private Investment Corporation (OPIC), a position requiring Senate confirmation.

In the 2004 election cycle, Reyneri led the Democratic Party’s outreach to the Hispanic community, serving as a Senior Advisor to the Chairman of the Democratic National Committee (DNC) and as DNC Director of Hispanic Outreach. Prior to joining the DNC, he served as a Senior Advisor to U.S. Senator John Kerry. From 1994 to 2001, he was appointed to senior-level positions in the Clinton Administration, including Chief of Staff at the Overseas Private Investment Corporation (OPIC), Special Assistant to the Deputy Chief of Staff to President Clinton, and Director of Regulatory Reform at the Occupational Safety and Health Administration (OSHA). In 2003, Reyneri was chosen as one of the top 100 Most Powerful Latinos by PODER magazine.

Previously, the EParaTodos Committee held its first event at Tekila’s Mexican Restaurant, during the month of May in 2019. Rufus Gifford was invited as the Keynote Speaker, who served as the United States Ambassador to Denmark from 2013-2017; a reality television star with his show, The Ambassador, featured in Netflix; and a former candidate for U.S. Congress in Massachusetts’s 3rd congressional district. He was the Finance Director for Barack Obama’s presidential re-election campaign in 2012.

Later during the month of July, the LatinX Networking was held at Bocaditos.

Jonathan D’Oleo was the Keynote Speaker, who is the author of the books: Emprende Dinámica and Ideas Claras; He is a former Wall street Stockbroker and the managing Director of the consulting firm D’Oleo Analytica based in Miami, FL.

The next one will be on February 25th, 2020 (location yet to be determined) and the Keynote Speaker will be Josiane Martinez, Founder, CEO and Creative Director of Archipielago Strategies Group. Josiane holds 18 years of experience working in public policy, cross cultural communications, public affairs and public administration. Prior to founding Archipelago Strategies Group, she served as Executive Director of the Massachusetts Office for Refugees and Immigrants.

At ASG, she has led campaigns for diverse clients, including a record-setting Open Enrollment campaign for the Massachusetts Health Connector, and groundbreaking community engagement campaigns for the City of Boston that engaged thousands of residents. She holds an MBA in Marketing from Simmons College and a BA in Public Communications and Political Science from the University of Puerto Rico.
With this type of initiatives, —the alumni formed— Entrepreneurship committee, volunteers to support the EParaTodos’ mission: which is accelerating economic and social impact through entrepreneurship. Continuing on the legacy that changed their lives as individuals, in context with their communities.