An exclusive interview with Bob Ansin.

Earlier this month, several erroneous Eagle-Tribune stories alleged that Robert Ansin, CEO of sustainable development company MassInnovation, was running out of funds and that asbestos was found inside the Monarch on the Merrimack building. On Sunday, September 16, the Eagle-Tribune ran a cover story by Jill Harmacinski and Bill Kirk which claimed that “workers in Tyvek suits and respirators were on site Thursday clearing the contaminated material out of the building.”

Construction on the first phase of the Monarch Lofts project in the old Wood Mill Building on Merrimack St. in Lawrence was approaching 40% completion after Ansin invested $25 million of his own money into the project. The project was selling strongly despite the broader market conditions: 53 of the 201 lofts in the first phase were already under agreement before the building was even completed. 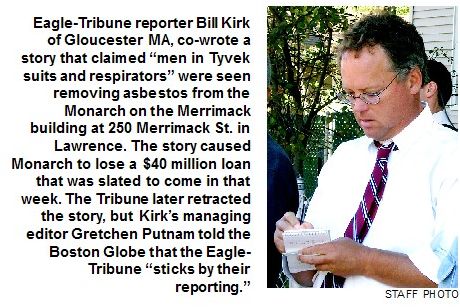 According to Ansin, a San Francisco-based bank backed out on their commitment on a $40 million construction loan days after the Tribune story came out.

“The bank cited the Eagle-Tribune story as a reason for pulling their commitment,” Ansin said. Construction on the $200 million project has been halted while Ansin seeks funding from other sources.

“We’ve had to spend a lot of time correcting the inaccurate perceptions that the Trib story created,” said Ansin.

“Harmacinski and Kirk’s story raised concerns about environmental issues that caused the bank to pull its financing commitment.

Those concerns were unjustified. But now we, the crews, and our buyers are paying the price for the inaccurate claims in those Tribune articles.”

“What makes it more surprising is that the Tribune had accurately reported on that story back in July,” said Ansin. “They had the facts. We had found a small pocket of asbestos in the ground outside, which was probably debris from when the Wood Mill’s twin building was demolished in the 1950s. We halted excavation work and filed an action plan with the Department of Environmental Protection.”

“The Tribune writers should have looked at the plan filed with the DEP when they wrote their story. Last week, the subcontractors were working outside the building, according to the plan. They were certainly not ‘clearing contaminated material out of the building’ as the Trib had written,” said Ansin.

“One thing for sure, this project is moving forward. I have made a commitment to the city of Lawrence, and I am keeping that commitment.

Monarch is the largest eco-friendly development in New England, and has brought positive national attention to a town that many people had overlooked. The project has been featured in CNN/Money as one of the top green developments in the nation, in Forbes as a Home of the Week, in Businessweek as Hot Property, and has been profiled on National Public Radio and the Wall Street Journal. Commonwealth magazine has described the project as “catalytic for the city of Lawrence” and as a “lynchpin in the city’s revival.”

Eagle-Tribune issues a correction: too little, too late

Shaw Rosen, the Chief Operating Officer of MassInnovation and Constantine Valhouli, principal of The Hammersmith Group, a firm which advises developers and cities on reviving historic downtowns, met with the Eagle-Tribune on Monday, September 17, to discuss the inaccuracies in Harmacinski and Kirk’s reporting.

The Eagle-Tribune issued a brief (50 word) correction the next day that confirmed that asbestos was not found inside the building. “But there’s a huge difference between a 1450-word cover story that alleges asbestos in the building, and a tiny correction on page two,” said Valhouli.

The Tribune also issued a correction for having written that MassInnovation was based in Fitchburg. “MassInnovation’s offices moved from Fitchburg to Lawrence in 2003. Part of our commitment to helping Lawrence revive was to become part of the community,” said Ansin. Many developers are seen as outsiders who come to a town for a project and then leave. “The Trib had reported that we were based in Lawrence in a number of previous stories. So it was surprising that they got that small but important fact wrong in their cover story.”

In contrast to Ansin contributing to the revival of the city of Lawrence by moving his MassInnovation’s facility to Lawrence from Fitchburg, the Eagle-Tribune (formerly the Lawrence Eagle Tribune) moved its’ offices out of Lawrence in 1968 and built their brand new (then) state of the art facility in North Andover.

“We chose to make a stand on this issue.”

Valhouli and Rosen discussed several other inaccuracies, including misattributed quotes, with the Tribune reporters, but no corrections were issued on those erroneous reports. Rosen responded to the Eagle-Tribune’s claim that Ansin is behind on his payments to the Merrimack Valley Regional Transit Authority (MVRTA) for parking across the street from Monarch. Ansin said that he has been withholding payment because of a legitimate concern about the contracts at the MVRTA.

“The maintenance fees for the garage appear to be much higher than they should be,” said Ansin. “It turns out that they were a no-bid contract. We have withheld payment until they can demonstrate that the contracts were legal, and their figures could be supported by a public bid process, something the MVRTA has not yet been able to do.”

“Here’s what the Trib didn’t tell their readers,” Ansin continued. “I donated the land so that they could build that parking garage at the new commuter rail station. As part of the agreement we were to get free parking on the top two levels but we agreed to pay the administrative costs to manage the building. Well, those costs turned out to be astronomical. We were paying two or three times the price we ought to be paying. So I began to question the billing.” That’s when, Ansin says, he learned that the contract for managing the garage never went out for a competitive bid. “That’s why we were withholding payment, not because we were going belly up as the Trib made it seem.”

“The real story here is about whether it’s acceptable for public services to go out for no-bid contracts,” said Ansin. “Our goal is to help the city of Lawrence revive. But Lawrence cannot be a sustainable city unless it is an efficient city. Public bidding helps keep costs down for the city and the residents. We chose to make a stand on this issue.”

“Why is that story not getting covered?” asked Ansin.

Monarch Loft buyers offered a refund – but most refuse 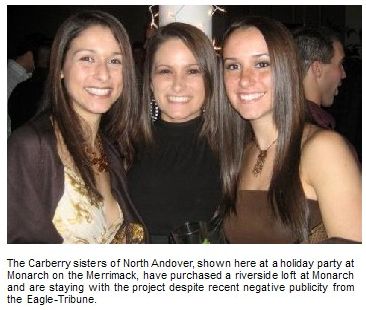 After the Tribune story torpedoed the Monarch project’s $40 million financing, Ansin recognized that there would be a delay for buyers whowere expecting to move into the lofts this winter. “I was troubled that our buyers’ lives would be on hold because of our problems with financing,” Ansin said. “We offered each buyer the chance to rescind their purchase agreement.

Ansin offered each of the 53 people who had deposits or contracts on a loft at Monarch the opportunity for a full refund.

Almost every one of the buyers refused to take their deposits back.

“Almost every one said they believed in the project and were willing to wait, despite the uncertainty of when construction will resume,” said Ansin. Several buyers said that they were not bothered by the bad press.

“Of course we will wait,” said Ed and Joannie Warnshuis of Tewksbury, who were the first buyers at Monarch in April 2006. “We looked everywhere and there is no place else we would rather live.” John Grange, a retired wine broker said he was not discouraged. “I’m sticking with this for three reasons: for the quality, for the vision, and for the integrity of the team,” said. Ansin said of the three who asked for their deposits back, all three said their decision was driven by external circumstances, not a lack of faith in the project.

Monarch’s sustainable approach quickly transformed the mill conversion from a local project to a national success story. But Ansin’s vision of sustainable development went beyond eco-luxury, renewable materials and resource efficiency: “We try to run every aspect of our business sustainably. When the project started, we bought and hired locally because it was the right thing to do. Right now, returning deposits was also the right thing to do,” said Ansin.

“We’re touched that so many people are standing by Monarch.”

The Impact on Lawrence

“Bob Ansin didn’t have to offer a refund to anyone,” said Michael Sweeney, Planning Director for the city of Lawrence.

“He has a signed contract with each of his buyers. Most developers would have said, ‘you’re just going to have to wait.’ But Bob didn’t do that. He showed he is a stand-up guy and he did the right thing, just as he did last summer when a small patch of asbestos was found in the ground outside the building. He could have paved over it and not said a word to anyone. Nobody would have been the wiser. But Bob voluntarily stopped the project, notified the Department of Environmental Protection, and had the problem taken care of at great personal expense. It’s really unfortunate for Lawrence that this project has been delayed. It’s going to have a very profound effect on the economy of this area.” 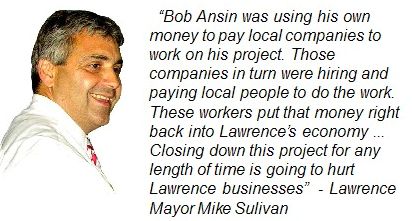 Lawrence Mayor Michael Sullivan said he was very disappointed in the halt of construction at Monarch saying that a ripple effect would be felt by local businesses.

“Bob Ansin was using his own money to pay local companies to work on his project. Those companies in turn were hiring and paying local people to do the work. These workers put that money right back into Lawrence’s economy. They get their coffee in Lawrence before work, eat their lunch across the street or walk to Sal’s for dinner after work. They are spending their money locally because they live here. Closing down this project for any length of time is going to hurt Lawrence businesses”

“We’re all pulling for Bob and we’re going to do whatever we can to help him through this,” said Mayor Sullivan. “As Monarch succeeds, Lawrence succeeds. The people in the Merrimack Valley ought to be rallying around him and his efforts to get this project back on track.”

Only days after Tribune’s retraction, Managing Editor Gretchen Putnam says she “Sticks by their reporting”

On Saturday, September 22, the Eagle-Tribune ran a cover story alleging that the Department of Environmental Protection (DEP) was investigating asbestos “inside and outside the building.” The Trib article quoted Joe Ferson, spokesman for the DEP, saying that the agency had an “enforcement action” against Monarch.

When questioned by the Valley Patriot, Ferson clarified the terms and contradicted the Tribune story.

This directly contradicted what was reported in the Eagle-Tribune article printed on Saturday, September 22.

“If you’re asking me if there’s an investigation going on at 250 Merrimack Street, yes,” said Ferson.

The enforcement investigation is directed against an independent subcontractor who was performing work at the site. According to the DEP website, a Methuen company called Premier Abatement & Labor Services, Inc. was fined $1,000 on June 25, 2007. The DEP website described the incident as follows:

“During a routine inspection of a demolition/asbestos abatement site at 250 Merrimack Street in Lawrence, MassDEP observed asbestos containing waste material which was not properly sealed or labeled in Premier’s asbestos-containing waste trailer.”

However, the Tribune story clearly stated that the DEP had an “enforcement action” against Monarch, instead of a routine and minor investigation against a subcontractor.

Despite these continued inaccuracies in their coverage of the Monarch story, Eagle-Tribune managing editor Gretchen Putnam was quoted in a Boston Globe story on Thursday, September 27, as saying “We stick by our reporting.”

Ansin said he is going to continue to seeking funding for the project but that the Eagle-Tribune’s continued attacks on Monarch are making it difficult.

Ansin said he has not ruled out a legal action against the daily newspaper.