By Tom Duggan on September 25, 2018Comments Off on Essex County Sheriff’s Dept. Pays Tribute to MIA/POW’S on Nat’l Recognition Day 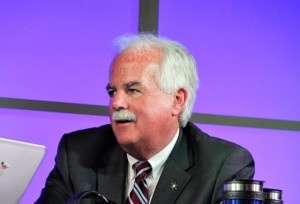 Sheriff Kevin F. Coppinger led a service on September 21, 2018 to commemorate National POW/MIA Recognition Day. Ceremony was held at the Essex County Sheriff’s Department (ECSD) Headquarters in Middleton next to the Vietnam War Veterans of Massachusetts Missing in Action Memorial which is the only monument in Massachusetts that recognizes the Vietnam War Missing in Action soldiers.

Sheriff Kevin F. Coppinger in his welcoming remarks explained how the names of 10 soldiers have been added to the monument this year.

These soldiers had gone Missing in Action but had their remains returned prior to the monument being unveiled in 1994.

This ceremony, which is the setting of a separate table in honor of our Prisoners of War and those Missing in Action, has been a tradition in place since the end of the Vietnam War.

Captain Shane Ehlers, Specialist, United States Army and Correctional Officer John Cassidy, Staff Sergeant, United States Air Force read the names of the 26 soldiers who have had their remains returned as well as the 39 soldiers still Missing in Action.

Taps was played by Lynn English Senior Alex Patten. Massachusetts Secretary of Veterans’ Services Francisco A. Ureña spoke regarding the importance of honoring the sacrifices of the soldiers by remaining diligent in the search for closure of all the soldiers remains being returned to their families.

The keynote address was given by Joyce Dalton from Wilmington who spoke of how her brother, Ensign Ronald Dow Eaton, went MIA on June 25, 1952 in the Wonsan area of North Korea and has never been returned. In closing, Sergeant Ned Shinnick with the Irish American Police Officers Association Pipes and Drums played Amazing Grace and The Northshoremen played God Bless America.