By Tom Duggan on May 16, 2012Comments Off on “Faces of Jesus” International Mail Art Exhibit Showing In Haverhill 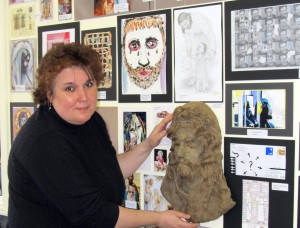 When Methuen artist Sharon Silverman decided to curate a Mail Art exhibit depicting the many faces of Jesus from around the world, she had no idea how big or how popular it would become.

“I wanted to do an art show that depicted the many ways people in different cultures around the world see Jesus, but I wanted it to be respectful,” Silverman told The Valley Patriot.

“What I didn’t want was shock art, or Jesus humor. I have no interest in that kind of art, there’s plenty of that garbage out there, that’s not what I am doing here.”

“Besides,” she added, “if I put one piece of shock art in here, everyone would be talking about that, and the rest of these wonderful pieces of mail art would be overlooked and ignored. So, I know some people are pretty negative about what I am doing, especially in the art world where pieces like the cross in urine is celebrated but that’s not what I wanted to do. If someone else wants to do that let them do it.” 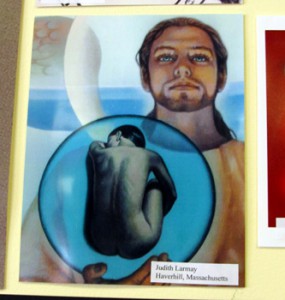 Silverman said she was sick of seeing “depressing” depictions of Jesus and pieces that mocked him and what he stood for. “But I was always fascinated that Jesus is shown in every culture in some way. Through the different art periods all the art changed too. You will see a cubist piece and a Byzantine piece and all these folk art pieces. So, not only is Jesus shown in different cultures but in different art forms. But no one was showing what people were doing today. What kind of stuff was gong on in this little sliver of time? So, when I didn’t limit it, except to be respectful of the subject matter, people were sending in all kinds of different art forms from all over the world.

Silverman said she put out the call on a website for the International Union of Mail Artists (iuoma-network.ning.com), an organization which she has been a member of for decades, “and the art came pouring in from as far away as the Netherlands, Australia, Russia, Africa, and every state in the US.” 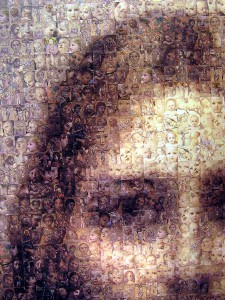 “People sent in patches, they sent in stickers, broaches, hand carvings, and some really creative pieces made from just about every material you can imagine. We even got a Harley Davidson biker patch,” she said laughing. “So you never know what people are going to send you when you do a showing like this, some of it is really fascinating.”

Silverman says her “Faces of Jesus” Mail Art Show is not only unique because of the subject matter, but none of the pieces showing at The Angles & Art Gallery in Haverhill, Massachusetts are for sale. 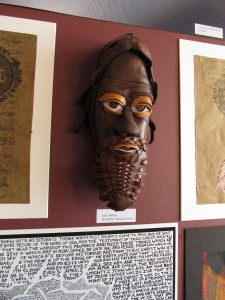 “It’s a free show for anyone who wants to see it, but the art is not for sale. We are not doing this to make money we are doing it to celebrate mail art and the subject,” she said. “Some people don’t get it. They say; ‘what are you crazy, you’re doing an art show and you are not making any money on it?’ They can’t fathom that.”

“I say, why can’t you fathom that art is for everybody? Come in, see it, enjoy it, photograph it and go home. If you like it, you like it. And if you don’t, you don’t. That’s ok too. I want the artwork to speak for itself. It’s a concept that people aren’t used to, ‘art for arts’ sake.’ It’s free to the public but it’s done so that people can come in and enjoy it and not have to worry about someone trying to sell them something.”

The “Faces of Jesus” Mail Art Show is being hailed as an unusual show because it’s something the art world doesn’t see very often. Silverman says that it took her nearly three and a half weeks to hang the art because of how many pieces were mailed in from around the world. She says that the show will be traveling and hopes to have it shown in Boston and Baltimore as well as other major cities across the country. 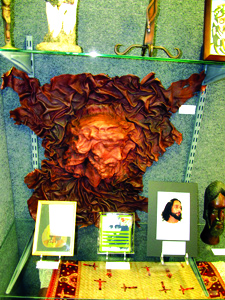 Another unique part of the “Faces of Jesus” Mail Art Show is that patrons of the gallery are allowed to photograph the artists’ work.

“It’s nice that people are allowed to photograph the different art pieces here. Usually the first thing they tell you when you walk into an art show is, ‘no photographs, no pictures.’ But we wanted this particular show to be photographed as much as possible, for personal use only of course. So, you can come in, photograph your favorite pieces, keep the photos for yourself, hang them on your wall, do whatever you want, as long as it’s for personal use.”

No controversy but plenty of negative comments

Asked why she decided on the “Faces of Jesus” as a mail art show, Silverman replied, “It was just an exhibit that meant a lot to me. I’m an artist myself and I thought this was really important.” Silverman admits, however that she has had problems with the perception of what she was doing and backlash from anti-religious zealots.

“There were so many people that tried to discourage this show,” she admits. “I went through so much to get this up. You would think I wouldn’t have to deal with that doing a show on Jesus in a respectful manner, especially doing a respectful showing of Jesus.” 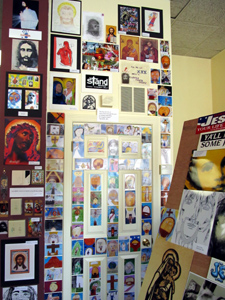 “You wouldn’t believe it, but people come after you. You know, some people have worked very hard to try and turn this exhibit into something controversial or make it seem like it’s something that it’s not. One newspaper even wrote that I was ‘trying to bring controversy to Haverhill,’ but of course, I’m not trying to do that. It’s not about that. But it is really interesting to see how people interact with this subject. People try to incite, especially in the newspapers to make this something negative. I’ve even had people say some really mean things to me. I have had people try to make me afraid I had one person make a comment to me when we were moving some of the pieces in here that I should worry about having my windows broken. But I’m not doing anything mean or hateful. It’s really bizarre.”

Artists who wish to send in their work for this or future shows can mail their art to: The Face of Jesus – An International Mail-Art Exhibition, P.O. Box 1212, Haverhill, MA 01831 (USA) This show has been extended until June 5th

Tom Dugggan is president of The Valley Patriot, you can email him with comments or story suggestions at valleypatriot@aol.com

“Faces of Jesus” International Mail Art Exhibit Showing In Haverhill added by Tom Duggan on May 16, 2012
View all posts by Tom Duggan →