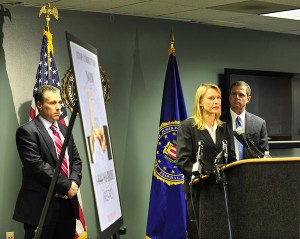 The initiative includes the launch of a new, toll-free-tip line number, 1-844-NOBRIBE (1-844-662-7423) and a billboard campaign called “Stop Corruption Now.” The campaign will focus on targeting fraud and corruption at all levels of government.

Public corruption remains a top criminal priority for the FBI.  It’s a breach of the public’s trust by government officials—whether elected, appointed or under contract– who use their public office for personal gain. It is a violation of federal law for any federal, state or local government official to receive anything of value in exchange for, or because of, any official act. Due to the secretive nature of bribes, such crimes are often difficult to detect and even more difficult to prove without the assistance of concerned citizens. As a result, the FBI has set up a public corruption hotline for reporting tips at 1-844-NOBRIBE. Online tips can be submitted at tips.fbi.gov.

Various types of corruption include bribery, extortion, embezzlement, racketeering, kickbacks, money laundering, as well as wire, mail, bank and tax fraud. The public is encouraged to review these corruption questionnaires for contract corruption, economic stimulus, and government fraud. If the answer is yes to any of these questions, they’re asked to contact the FBI.

One area of growing concern over the last few years is the expansion of gaming which may also increase public corruption, financial and organized crime.

“Concerned citizens are the FBI’s biggest asset when it comes to exposing people who are abusing the public’s trust and misusing taxpayer money to line their own pockets. This tip line is designed to be an easy way for those with knowledge of schemes to report those schemes,” said SAC Lisi.

In connection with this initiative, advertisements for the tip line will also appear on Facebook in the coming weeks.