The Unknown Bandit has hit tw 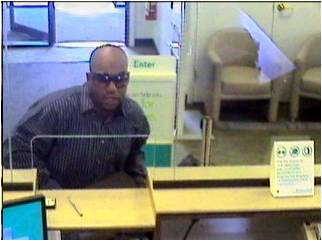 The robber is a black male, medium athletic build, approximately 25-30 years old, 5’8” to 6’ tall, is clean shaven and may have a tattoo on the right side of his neck. While a weapon has not been displayed during any of the robberies, the suspect has gestured to his waist, as if reaching for a weapon. He is considered ARMED AND DANGEROUS.

On Monday, July 28, 2014, at approximately 10:20 a.m., the robber entered Century Bank located at 703 Granite Street, Braintree, Massachusetts. The robber wore a long sleeve button-up dress shirt, yellow tie, sunglasses, and a Red Sox baseball hat. He produced a note to the teller demanding money, once the money was received; he fled the bank in an unknown direction. 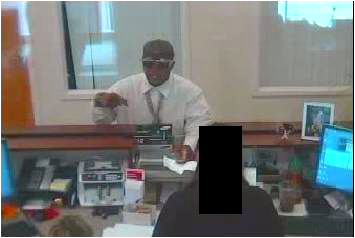 On Monday, August 11, 2014, at approximately 1:00 p.m., the robber wearing a blue and white striped dress shirt entered Citizens Bank located at 420 Granite Avenue, Milton, Massachusetts. He approached a teller and again presented a note demanding money – at this time he gestured to his waist, as if to reach for a weapon. With money in hand, the robber exited the bank and entered a red SUV, possibly a Ford Edge, and was last seen driving onto Interstate 93 North.

The robberies are being investigated by the FBI’s Violent Crimes Task Force to include Massachusetts State Police, as well as Braintree and Milton Police Departments.

The Wanted poster and the captured bank surveillance photos and can be viewed at http://bankrobbers.fbi.gov.