By Tom Duggan on November 30, 2015Comments Off on FBI Offers $15K Reward to Recover Stolen Firearms from Army Reserve Center in Worcester 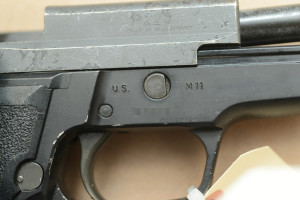 The Boston Division of the FBI is offering a reward up to $15,000 for information leading to the recovery of the remaining six firearms stolen from the United States Army Reserve Center in Worcester, Massachusetts.  A total of 16 weapons (six M-4 rifles and ten M-11 pistols) were stolen from the facility sometime between the evening hours of Saturday, November 14, 2015 and early morning hours of Sunday, November 15, 2015. To date, ten weapons have already been recovered, including all six M-4 rifles.

The outstanding stolen weapons are:

Please note the ‘U.S.’ government etching unique to these weapons.

The FBI continues to devote significant resources to locate and recover these firearms and remove them from the possession of the unauthorized individual(s) who may have them.  All local, state, and federal law enforcement agencies were quickly made aware of the theft and are assisting the FBI as warranted.

“We’re asking anyone with information about the location of these weapons to come forward, and anyone who may have access to these weapons to turn them in to either the FBI or their local police department,” said Harold H. Shaw, Special Agent in Charge of the FBI’s Boston Division.