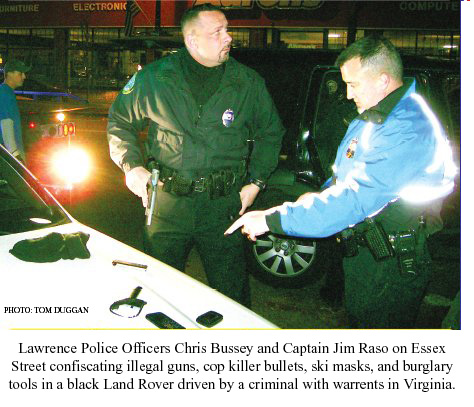 “This year all new officers hired under the grant must be military veterans that have served at least 180 days of active military service, any part of which occurred on or after September 11, 2001.”

Senator John Kerry and Congresswoman Niki Tsongas announced today that the City of Lawrence will receive a $750,000 COPS grant from the Department of Justice to hire 6 police officers. The City of Lawrence has struggled with rising crime in the face of significant budget shortfalls which have forced deep cuts to the police force. Tsongas has met with Police Chief John Romero on several occasions to discuss ways to bring federal resources to Lawrence for crime prevention and sent letters to the Department of Justice advocating for the COPS grant that was awarded today.

“This investment means jobs and safe streets, period,” said Sen. Kerry. “Our police forces in Boston, Lawrence, and New Bedford have had to do more with less and still they go above and beyond the call of duty to protect us. This is desperately needed funding.”

“A government’s most fundamental responsibility is to keep its citizens safe which is why we fought so hard for these needed funds,” said Congresswoman Niki Tsongas. “The City of Lawrence has faced extraordinary budget challenges that have forced cut backs in essential services including fire protection and law enforcement. The funds being announced today will put officers back on the streets to help protect City residents and we will continue to advocate for additional resources for emergency services in Lawrence.”

The funds from the COPS grants provide 75 percent funding for approved entry-level salaries and benefits for three years (36 months) for newly-hired, full-time sworn officer positions (including filling existing unfunded vacancies) or for rehired officers who have been laid off, or are scheduled to be laid off on a future date, as a result of local budget cuts. Any additional costs above the approved entry-level salaries and fringe benefits, up to $125,000, are the responsibility of the grantee agency. This year all new officers hired under the grant must be military veterans that have served at least 180 days of active military service, any part of which occurred on or after September 11, 2001.

In 2009, Kerry and Tsongas helped to obtain funds from the American Recovery and Reinvestment Act that enabled the Lawrence Police Department to hire 7 officers. The COPS program allows the federal government to act as a partner in local law enforcement efforts and has been instrumental in helping police departments in the Merrimack Valley meet staffing needs.