By Tom Duggan on December 29, 2013Comments Off on Firefighter Sullivan, Detective DeLano Honored by Methuen Exchange 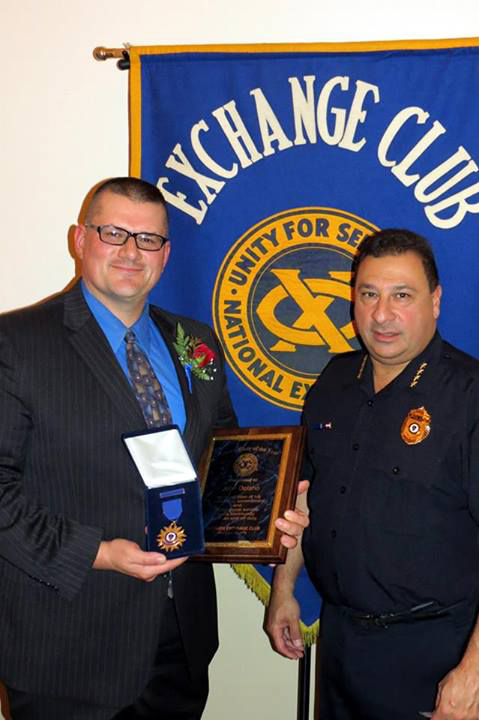 The Methuen Exchange Club presented Methuen Police Detective John Delano with their Police Officer of the Year Award at their annual dinner banquet last month. Late last winter, Methuen Police Chief Joe Solomon assigned Detective Delano to head up an investigation into 15 robberies in the area. After a three month investigation, Detective Delano got his “guy” and the task force officers arrested The Merrimack Valley Bandit, Rafael Beamud, Jr., and charged him with the fifteen bank robberies.

On May 5, 2010 Detective Delano responded to investigate a brutal attack on a woman who had been kidnapped at gunpoint and violently raped. Detective Delano processed the crime scene, collected evidence and interviewed the woman. He knew that whomever had committed this attack was a savage serial rapist. John worked endlessly trying to solve the case, knowing that this vicious rapist would strike again. In October, Detective Pilz was investigating another kidnapping and assault when Detective Delano was clever enough to read between the lines in that case, noticing several key facts that were consistent with his earlier case. This time, the detectives had a suspect. Detective Delano put together a photo array and showed it to his earlier victim. The victim looked at the photos and immediately began to shake, cry loudly and yell, “THAT’S HIM!”

John knew he had his guy. Detective Delano attained a warrant and the suspect was arrested.

What the suspect didn’t realize was that he had just provided Detective Delano with the last piece of evidence he needed. John walked over to the discarded cigarette; the same brand that John had recovered at the original crime scene two years earlier which he had submitted for DNA testing. The DNA was compared and matched. In September 2013, three years after the serial rapes began, the rapist was brought to justice and stood before a jury and was found guilty of this brutal assault. He was sentenced to over 15 years in state prison.

“I believe this investigation alone by Detective Delano has saved countless area women from being victims of this monster,” Chief Solomon said. 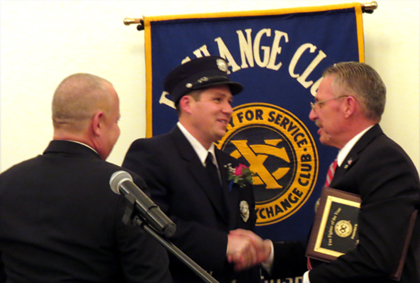 FIREFIGHTER OF THE YEAR MICHAEL SULLIVAN

The Methuen Exchange Club honored Methuen Firefighter Michael Sullivan for his heroic actions while on vacation at a beach in Mexico last year.

While Firefighter Sullivan was coming out of the water, he noticed a struggling swimmer being pulled under water in the heavy Mexican surf.

With heavy currents downing the woman, Firefighter Sullivan ran to her, swam out through the rough waters, and was able to pull the woman back to land, saving her life.

Firefighter Sullivan is an immigrant from Germany who grew up in Lawrence and went to Central Catholic High School.

He was appointed to the Methuen Fire Department in 2005 and has a bachelor’s degree in business administration from Fitchburg State University. 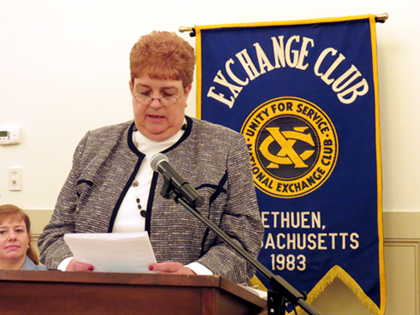 Because of the efforts of Linda Soucy, the Lena Lahey Community Center was opened in 2008, providing after school programs, education resources, health and wellness programs, social services and a library. Not only did Linda Soucy establish the MAN and run it’s various programs, she also spends an incredible amount of time working directly with young students, tutoring them, coordinating outdoor activities and even buys Christmas presents and supplies out of her own pocket.

Linda also lives in the Arlington neighborhood and was instrumental in motivating city officials to apply for weed and seed grant money which brought in federal dollars to police the neighborhood.

Chief Solomon says that without the efforts of Linda Soucy, the Arlington neighborhood would still be riddled with nightly shootings, prostitutes walking the neighborhood and gangs roaming the streets. “That isn’t happening any more, thanks to Linda Soucy,” he said.