By Christine Morabito on October 5, 2010Comments Off on For Those About to Vote, We Salute You! 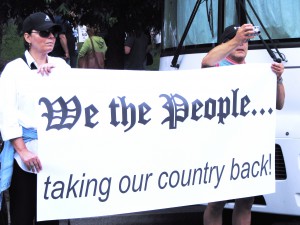 I’m absolutely humbled by the Tea Party and what they have been able to accomplish over the past 18 months. Not bad for a haphazard group of disaffected citizens who have been called irrelevant and were never expected to sustain momentum until the November elections. It is my hope that this enthusiasm will convince those folks who have yet to separate their derrieres from their couches, that they too can make a difference in American politics—even in Massachusetts.

Although turnout was poor for our interminable Massachusetts primary, we were able to advance some fantastic conservative candidates. Sadly, we had to say goodbye to some great ones too, but we hope they will not be strangers. The primary winners now challenge numerous out of touch politicians, many of whom went out of their way not to identify themselves as “incumbents” on the primary ballot. Being an incumbent these days must make for a bad night’s sleep.

The most amazing feat of strength was our ability to execute a successful write-in campaign for James McKenna for Attorney General, who is now challenging the ineffective Martha Coakley. McKenna was required to obtain 10,000 votes, which is difficult enough. Can you believe he got almost 3 times that many?

The Conservative movement has caught fire and it seems there’s nothing we can’t do. But what I find distasteful is the reaction of some Republicans to the success of Tea Party endorsed candidates. If they thought having an “R” after their name would give them a free pass, they were sadly mistaken. The Tea Party has made it clear we are not thrilled with some of the Republican candidates they have served up, and we no longer have the stomach for a RINO. For the Republican establishment to act like sore losers and disparage the Tea Party, which itself contains a large number of Republicans, seems unwise. Republicans, we are not your enemy. We are trying to tell you something.

Massachusetts has the rare opportunity on November 2nd to reign in state government by voting Yes on Ballot Question 3, thereby reducing the sales tax from 6.25 percent to 3 percent. For those of us who support the concept of smaller government voting Yes on 3 is a no-brainer. I was shocked to learn that some prominent conservatives are not exactly over the moon about the initiative. This has me puzzled. If we want smaller government we cannot shy away from the first chance we get to enforce it. Does anyone think our legislators will find religion and voluntarily reduce their spending?

Liberal hysteria over Question 3 is predictable. We must not believe the hype about the law “cutting aid to cities and towns.” We all know there are a plethora of cuts to be made—starting with rampant waste, fraud and abuse—without devastating local aid. Making this a public safety issue is their predictable response to any proposed cuts. Only 10 percent of total state spending goes to local aid. If they choose to cut large amounts from our cities and towns then shame on them!

We applaud Governor Chris Christie for the difficult decisions he has made to get the state of New Jersey on the right fiscal track. His rare courage has allowed him to stand up to special interest groups and powerful public service unions. Watching him work makes us long for our own Chris Christie.

Tim Cahill for Governor, I’m sorry, but it’s time to give up the ghost. I was willing to give you a chance, but your numbers are subterranean and it’s becoming painful to watch. Your decision to pull a Democratic ballot in the primary, while attempting to convince us that you had left the party, was the final nail in your gubernatorial coffin. If you insist on staying in the race and become the spoiler, resulting in the reelection of Deval Patrick, Massachusetts conservatives may never forgive you.

The radical left has good reason to fear the Tea Party. The left’s progressive agenda is not sitting well with those of us who share a deep respect for the Constitution. Try as they will to discredit, belittle, misrepresent and demonize us, informed people are not buying what they’re selling. They cannot break our spirit nor will we sacrifice our values or our beliefs. Ultimately, we are not here to make friends. We are here to save our country.

There is still much we can do before November 2nd to insure that conservatives have a powerful voice in government. It’s not too late to adopt a candidate (or two), join a standout, donate or help with phone calls. Displaying yard signs and bumper stickers is also quite valuable. Come November 2nd, we will walk into our polling places with our heads held high, knowing we gave our all. The revolution will be televised.

If you’re tired of your government treating you like a baby treats a diaper, we welcome you to join us: Merrimack Valley Tea Party meeting. Wednesday, October 13th @ 7 p.m. VFW hall 32 Park Street N. Andover, MA.