By ValleyPatriot on September 27, 2014Comments Off on For TV Fans, Fall Is The Best Time Of The Year 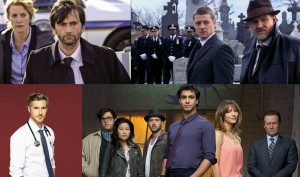 Fall means the end of summer for most people, but it is the time of year that most TV fans look forward to. It’s the time when most shows come back from their long summer break and return to the airwaves with new episodes. This year is no different. While some shows will wait until October to make their return, most shows are returning this month. It’s also the time of the year when most new shows will make their debut.

There are a few shows that I’m looking forward to seeing based on what I know about them so far. One of them is CBS ‘Scorpion.’ The series is loosely based on IT genius Walter O’Brien, who recruits other geniuses to help solve the complex problems of the world. It stars Terminator 2’s Robert Patrick, Katherine McPhee, and former Game of Thrones actor, Elyes Gabel. It premieres September 22nd at 9, on CBS.

Another show I’m looking forward to is FOX’s limited series ‘Gracepoint.’ It stars Breaking Bad star Anna Gunn, former Doctor Who actor David Tennant, and Nick Nolte. This series is a remake of the UK drama ‘Broadchurch,’ in which Tennant also starred, but in a different role. The show follows the investigation into the murder of young boy in a small California seaside town. The media frenzy that ensues throws the entire town and the lives of its residents into turmoil. ‘Gracepoint’ will last for 10 episodes and premieres Thursday, October 2nd at 9 on FOX.

FOX’s ‘Gotham’ is a show that is generating a lot of buzz. When the show was originally conceived, it was to follow the early career of Batman’s Commissioner Gordon on the Gotham City Police Force. However, the show evolved and will now tell the origin stories of the characters of Bruce Wayne, and several Batman villains such as Penguin, The Riddler, Catwoman, The Joker, and Harvey Dent, among others. Southland’s Ben McKenzie is playing the legendary police commissioner. The series will premiere September 22nd at 8 on FOX.

One more show that seems intriguing is FOX’s ‘Red Band Society.’ This show centers on a group of teenagers living together in a hospital’s pediatric ward, and the staff members who often serve as their teachers, mentors and surrogate parents in addition to overseeing their medical care. The show comes from Steven Spielberg’s Amblin television production company, and it stars Oscar winner Octavia Spencer and Dave Annable. FOX has already put the premiere On Demand if you don’t want to wait to watch it. ‘Red Band Society’ premieres on September 17th at 9 on FOX.

Then, of course, we have the returning shows. There a quite a few notable returns that will happen in September and October. A couple of them are entering their last seasons. HBO’s Boardwalk Empire will premiere its final season on Sunday, September 7th and the final season of Sons of Anarchy will hit the airwaves with a 90 minute season premiere on Sunday September 9th on FX.
Here are some other new and returning shows of note: