By ValleyPatriot on April 2, 2018Comments Off on Fox’s 9-1-1: Not Perfect But Wildly Entertaining ~ TV TALK with BILL CUSHING 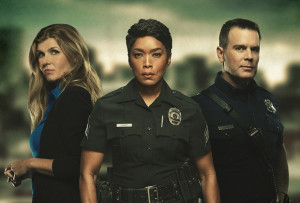 At first glance, the previews for Fox’s new procedural series ‘9-1-1’ may have appeared that it was going to be just like any other police/firefighter/first responder drama. Don’t get me wrong, there are some aspects of the show that are familiar. If you’re a child of the 70s, you’ll remember shows like ‘Emergency!’ or ‘Adam-12.’

‘9-1-1’ will remind you of those series in some ways. All of these shows have episodes that cover multiple cases and calls that the characters cover, and then they’ll have episodes that center on one case for the entire hour. What differentiates ‘9-1-1’ from those earlier series is that this series delves more into the personal lives of the characters. Showing what makes them tick, what makes them who they are.

‘9-1-1’ comes from the creators of ‘American Horror Story’ & ‘Glee’, Ryan Murphy and Brad Falchuk. They’ve become known for their crazy plot twists and their willingness to take their stories to just about anywhere. That makes it all the more surprising that they would create a procedural drama about first responders.

This series has 2 things going for it. The first is the wildly entertaining situations that the characters respond to in each episode, such as a baby flushed down the toilet and being stuck in the pipes in a wall. A man falling out of a rollercoaster because he was too heavy to completely close the safety bar. A dad and his son getting blown away when the bouncy house they are in comes loose from the restraints and floats off in the heavy wind. A girl’s massive pet snake has wrapped itself around her neck and is choking her to death.

The second thing is the top notch cast. The cast in ‘9-1-1’ feature actors coming from a long line of great TV series and movies. Peter Krause, who plays LA firefighter Capt. Bobby Nash, is a multiple Emmy nominated actor from series like ‘Six Feet Under’ & ‘Parenthood.’ Angela Bassett, who plays LAPD Sgt. Athena Grant, is an Oscar nominee for her role as Tina Turner in ‘What’s Love Got To Do With It.’ Connie Britton, who plays 9-1-1 operator Abby Clark, is a multiple Emmy nominee from her work in ‘Friday Night Lights,’ ‘American Horror Story,’ & ‘Nashville.’

Where the show needs to improve is with some of the sillier melodramatic personal storylines. The most glaring and annoying one deals with Abby and her relationship with firefighter Evan ‘Buck’ Buckley. Abby meet Buck while dealing with him over the phone during an emergency, and their relationship continues as strictly a phone relationship for a while before they actually meet. The storyline feels forced and the two characters are clearly a mismatch. Abby would be better suited with Captain Nash, and that might be where the story is headed.

The storylines aren’t all bad, however. Some of them are quite interesting and well written. Captain Nash has a troubled past family life and personal demons that sometimes interfere with his work and personal friendships. Abby lives with and takes care of her mom who is suffering from Alzheimer’s. Athena is trying to keep her family together; her marriage is suffering after her husband has revealed to her that he is gay and is in a relationship with another man.
While the personal storylines are interesting, the good thing is that they have not gotten in the way of the exciting rescues and action sequences that are the shows bread and butter.

So far, 9-1-1 has thrived on being unpredictable and viewers have responded. The show has already been renewed for a second season. All in all, ‘9-1-1’ is worth your time. Give it a look.

Do you have any questions about TV? Email me at BillsTVTalk@gmail.com. I will answer all of your questions and will feature some of the questions I receive in a future column. For daily TV news, follow me on Twitter @BillsTvTalk and on Facebook at BillsTVTalk.