By ValleyPatriot on October 10, 2012Comments Off on FROM THE FEDORA: The poll the media isn’t talking about

By @DaTechGuyblog on twitter host of DaTechGuy on DaRadio Sat 10-noon. AM830 WCRN 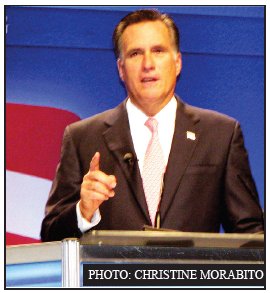 For most of September we were treated to the narrative of a surging Barack Obama, going into the debate this week the word was if Mitt Romney didn’t perform it was pretty much all over.

Mitt Romney’s strong performance ended that meme but what you may not realize is the premise it was based on, President Obama’s dominance was, frankly false.

While we saw poll after poll showing the President ahead there was one poll never discussed the Rasmussen Poll of Party identification.

This monthly poll tracks party affiliation and the figures the last 10 months are revealing.Starting in December 2011 the Rasmussen poll showed the GOP leading in party identification with a margin varying from a minimum of .9% to a Maximum of 4.3%(now 2.6% as September).

This is significant because this has not been reflected elsewhere, that is: there hasn’t been a single major poll with a sample weighed to reflect this GOP advantage.Every major poll of 2012 contained samples with Democrat advantages from +4 to as much as 11.

Fortunately Rasmussen has data available online dating back to 2004 so it simply becomes a matter of matching the Rasmussen data to the results of elections to see if they match.

For 82 months from Jan 2004 through Oct 2010 the Democrat party had a registration advantage of varying sizes.

In Nov 2004 for example the Democrat party had a small 1.6% advantage in registration which was not enough to prevent President Bush from winning re-election barely, with small gains in both the House and Senate for the GOP.

By 2006 The Mark Foley scandal became the news of the day and a year that started with a 1.6% Democrat lead reached 6.1 % in November.Accordingly they had a good midterm with a shift of 31 house seats and 5 in the senate.

In 2008 Democrats soared to unprecedented heights at one point managing a gap as large as 10.1% and a share of the electorate at 41.7%By election day that had dropped to 41.4% but the gap of 7.6% was still the biggest of any election day in the 9 year period.As might be expected the Democrats expanded their lead by a further 21 house and 8 senate seats while Barack Obama won election to the presidency with plenty of electoral votes to spare.

2010 was the most incredible of years, the rise of the tea party reached its zenith in November as the GOP picked the perfect time to have their very first lead in the survey.It was only 1.3% but that small lead resulted in a historic swing of 63 house seats winning back every one that had lost since 2006 and more.

In 2011 the lead changed hands repeatedly with “other” managing a tie for the lead for the only time in nine years but by December the GOP took the lead that they hold to this day.

So what can we conclude from all this? Three things

The flow of registration matched the election results.

Democrats win when they have a large advantage 6.9 & 7.6% in registration.

The GOP can win even with a small deficit but with any registration advantage, wins and wins big.

Does this mean it’s over, well the current 2.6% September lead can change over two months but that GOP lead is the one of their largest in history.

Even worse for Democrats the trends of this poll have not only been accurate for a decade but the 10 month GOP lead matches current events from Scott Walker’s win in Wisconsin (Where the MSM insisted was a dead heat as late as an hour after the polls closed) to the improbable victory in NY-9 a district within the city itself that nobody in their right mind would have predicted even in 2010.

And all of this happened without a single Mainstream media poll reflected this reality of the national GOP majority.

Tell me with the economy in the tank, the Arab Spring becoming a winter and embarrassing revelation on Libya coming daily, what is the prospect of a swing of that size to the Democrats happening right now?What are the chances of this happening in an environment so dismal that you actually have the New Yorker Eastwooding Barack Obama?

People are saying that debate forced the media to expose president’s weakness, but even if it had not on Election Day the people votes, unskewed by sample bias would do have done it for them.