By Tom Duggan on March 9, 2012Comments Off on Gardner Mayor’s Mark Hawke’s State of the City Address – 2012 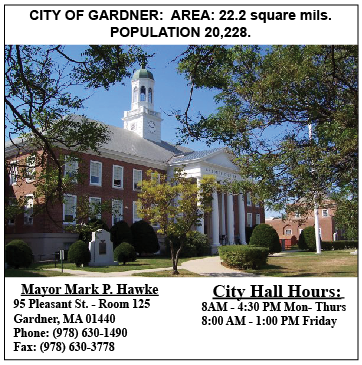 Thank you President Janssens and thank you for your continued leadership of the Council.

I’d also like to thank all of the Councilors for their work and dedication to the City. These past few years have not been the easiest of times for the City, but working together we have persevered.

In order to continue moving forward I feel that it is important to pause and reflect on where we’ve been and some of our accomplishments over the past year.

In keeping our collective oaths to the citizens of Gardner to be as prudent as possible with their tax dollars, we have been successful in acquiring funding to pursue the development of a wind turbine at the Summit Industrial Park.

This turbine would be capable of producing approximately 120% – 140% of the City’s collective annual energy consumption creating a savings of more than $600,000.

Through the efforts of our Economic Development Coordinator and Community Development Director we were successful in securing state funding to assist with the redevelopment of a former vacant warehouse on Main Street into what is developing into a beautiful addition to one of Gardner’s Gateway.

This new professional building will bring jobs and an expanded tax base while beautifying an entry point to the City.

In continuing our efforts to open up government to our constituents, the City was once again the recipient of the E-Government Award with Distinction for our efforts in posting all available information and forms on the City’s website.

In 2010 the City’s bond rating was improved from a Baa1 status, jumping three ranks, to an A1 status.

This is due in no small part to our continued fiscal prudence and a continued focus on providing an efficient and streamlined government.

Working in concert with Federal agencies we have demolished the former Country Home Furnishings building which sat precariously vacant and abandoned in a residential neighborhood.

Gardner with more work to continue this year. In conjunction with the S. Bent project the City has acquired ownership of the former Garbose property.

Utilizing a $1 million Revolving Loan Fund grant award, and working in conjunction with the Gardner Redevelopment Authority, we will be able to remediate this property and return it to the tax rolls. In a continued effort to make Gardner as attractive as possible to industry, this past year we advanced our Mass Bio rating from Bronze to Gold. We have our sights set on the highest rating of Platinum and I am hopeful we will reach that plateau this year.

By working smarter and challenging the way “we have always done things”, we have been able to incrementally restore school bussing. You will recall that school bussing was a casualty of budget cuts and was reduced to the state mandated K-6 allowance. This current school year we are bussing students through grade 9. I am hopeful that within the very near future we will be able to restore bussing for all grades. It is my belief that this is a safety issue and a quality of life issue.

These next two items I am perhaps most proud of.

Working together to hold the line on spending, while still offering the citizens of Gardner the services they expect and deserve from their local government, we have topped the $1 million mark in our stabilization fund.

This will further impress the bond raters and is an accomplishment we should all relish.

Anniversary. From the cemetery re-enactments, which included Councilor Gerry, the Fire Chief, and myself among numerous others, to the Fireworks display to the Fireman’s Muster to a magnificent parade and everything in between. It was numerous weekends of immense civic pride and truly showcased Gardner in the best possible light.

I cannot stress enough that all of the accomplishments that I have mentioned plus many others were realized in one of the worst economies in over a generation.

We are once again being challenged this year. While the economy is starting to rebound, the funds we receive from the state in order to perform mandated services is once again on the chopping block. Since taking office in 2008, Gardner’s local aid from the state has been reduced by approximately $2 million.

If the Governor’s number’s hold true, the City will be receiving less city-side local aid in FY 2012 than we did in FY 1999.

In a few months I will be submitting to you my FY 2012 budget. Through collaboration with the 7 city-side unions over the past several years we have been able to weather the fiscal storm to date. It is my sincerest hope that this collaborative relationship will be able to continue as we enter negotiations once again.

Change is not always welcome or easy, but it is necessary to survive.

Over the course of the past 5 fiscal years, municipal health insurance costs have increased by almost 75% or $3 million. This rapid rate of growth far outpaces allowable property tax increases which is limited to an aggregate of 2 ½%.

Authority was emulated by numerous communities across the state. Last week at a meeting in Salem, MA the Governor told the assembled Mayor’s that we were right and his filing of a bill to allow Plan Design Authority for municipalities was proof that municipal leader’s cries were heard.

This same group of Mayors will be meeting with Speaker DeLeo in 3 weeks to discuss this very same topic. The Speaker is also now in favor of some sort of Plan Design Authority legislation.

This year we will move aggressively forward along the path to a new Police Station. The current police station is inadequate, unsafe, and past it useful life.

After spending a considerable amount of time at our current station, learning what it is the officer’s deal with on a daily basis and touring numerous other facilities within the region, I consider it a grave injustice to ask our public safety employees to put themselves in harm’s way by simply reporting to work.

Their jobs are difficult enough without having to work in substandard conditions.

Some may ask why we are not pursuing a combined public safety building as some other communities have.

Simply stated, the Fire Department building is in decent shape and adequate for the City’s purposes. We’ve replaced the windows and we are fixing the roof. If the Fire Department expands, it would be wiser to open a substation in another part of the City.

We are now engaging professionals to assist us with the next steps. Some of these steps will include the distribution of information regarding the inadequacies of the current station, the benefits of a new station and asking residents to tour the current station so they can see for themselves the shortcomings of the facility.

We will also be continuing our efforts to be recognized as a Gateway City. We meet all of the arbitrary criteria of Gateway Cities, except for population. This is an illogical criteria and level assigned by a bureaucrat in an office in Boston. We are currently being shut out of funding streams, meetings and discussions because we do not meet this one ludicrous criterion.

Gateway Cities were originally defined as being the historical urban centers that have a rich manufacturing history and are now saddled with vacant mill buildings.

Gardner is the definition of a Gateway City and we will keep fighting to make ourselves heard on this matter.

I should mention that our efforts are bearing fruit in that we have achieved a label of “middle tier” community and “Gateway Plus”. However, this is an example of one arm of government not knowing what the other is up to. Gardner is not a second class community and we deserve the same funding opportunities and seat at the table that similar communities have.

In 2012 I am confident that we will see a permanent re-opening of the Gardner Heritage State Park Visitors Center. This facility, closed since 2002 offers guests a glimpse at what made Gardner great and is a tragedy that we have had to endure this building be shuttered for so long. After less than two weeks on the job, the newly installed Commissioner of the Department of Conservation and Recreation, Ed Lambert, visited Gardner. We met at the Visitors Center and discussed a roadmap to reopening. It was a productive meeting that was facilitated in no small part by Energy and Environmental Affairs Secretary Rick Sullivan and Lt. Governor Tim Murray.

It should also be noted that Secretary Sullivan, Lt. Governor Murray and Commissioner Lambert are all former Mayors and lend a sympathetic and empathetic ear to our cause.

Recently, the City was the recipient of some good news from the state in that we will be receiving grant funding to assist with the roof replacement on three of the City’s schools. This is work that is desperately needed and would have had to have been done regardless of the grant funding. While the grant funding will only cover a portion of the cost, this project demonstrates the City’s commitment to the schools and the children of Gardner.

It’s clear that I am proud of the accomplishments we have been able to achieve in notoriously treacherous times and it is equally clear that I am enthusiastic about the future of Gardner.

We are tackling the difficult situations head-on and dealing with our problems now.

We are building and planning, as I stated earlier, not for tomorrow, not for next year, but for the next generation.

I thank you all for your continued efforts in moving Gardner, the place we all call home, forward in a positive direction, by working together.