By ValleyPatriot on July 28, 2016Comments Off on Getting the People’s Business Done 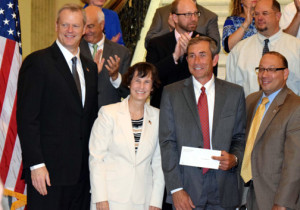 The Massachusetts House of Representatives recently passed important legislation for workers, for our communities, and protections for transgender individuals.

Facing an unexpected decline in capital gains, we also passed a budget on time – unlike many states throughout the country.

I will have more on the budget in the August edition. Here are a few of the many pieces of important legislation that recently passed the House of Representatives.

Most important is comprehensive legislation to promote alternative energy.

I have spoken to many families that struggle with high energy costs, especially electrical costs, and are directly impacted by increasing costs to heat their homes in the winter.

Part of these higher costs result from Massachusetts’ heavy reliance on natural gas, which accounts for nearly 60% of electricity generation in the Commonwealth. Accordingly, we areoften subject to volatile swings in prices.

This month the Massachusetts House passed a comprehensive bill that would increase our use of hydropower from Canada and wind energy here in Massachusetts.

There are also some important consumer protections that I strongly supported in this bill:

The first is about gas leaks.

Gas leaks are a serious public safety and health hazard, especially in some of our more urban areas. They often go unaddressed, and their cost is absorbed by ratepayers like you. I supported an amendment included in this bill that would put a stop to that practice by requiring private suppliers to pay for the costs of leaks and making repairs.

For similar reasons, I supported a measure included in this bill that would allow property owners to get favorable financing for energy efficiency upgrades to their homes.

A second piece of Legislation recently passed by the House is The Municipal Modernization Bill, a culmination of efforts taken by Lieutenant Governor Karyn Polito and Governor Baker to work with municipal leaders and the Legislature to develop policies that promote less bureaucracy at the local level. Changes put into law by the House include making municipal construction procurement easier, providing greater flexibility for providing services and administrative functions electronically, and greater flexibility to use parking revenue.

Finally, the House passed legislation expanding anti-discrimination protections for individuals identifying as transgender to all public places including hospitals, parks, shopping malls, restaurants, airports, and restroom facilities. As a moderate common-sense Democrat, I try to approach every issue with an open mind and with an eye as to how it will affect my constituents and the people of Massachusetts. This bill, in my mind, will not result in noticeable changes for the general population, but will improve protections for transgender individuals throughout the Commonwealth and those living in my district, and provide requested guidance to the business community.

Numerous businesses, including Harvard Pilgrim, Google, and Eastern Bank, endorse this legislation. Business groups make the argument that businesses may be less willing to locate in Massachusetts without protections for their transgender employees. We have observed closely the chilling effect that discriminatory practices had on North Carolina small business and corporations.

State Representative Linda Dean Campbell, 15th Essex, serves as Vice Chair of Public Safety and on the Committee on Ways and Means. She can be reached at 617.722.2430/linda.Campbell@MAhouse.gov or 978.989.0722/representative.linda.campbell@gmail.com www.statereplindacampbell.com