By Christine Morabito on November 17, 2015Comments Off on GMOs and Other Conspiracy Theories

“Killer Tomatoes” was a cute name for a really silly horror flick. When the term is applied to genetically modified organisms, things get even more absurd. Ditto, the names, “Frankenfoods” and “Terminator Seeds,” which unfairly depict one of the greatest advancements in agricultural history. Unfortunately, these scary words are effective, especially on those with limited knowledge of science and/or agriculture.

There is absolutely no evidence that GM crops or GMOs are unsafe for humans or the environment. Many a flawed study, some completely unscientific, have been successfully challenged. Despite the paranoid-delusional rhetoric, our government is not conspiring with Monsanto to poison us. Monsanto is not chomping at the bit to sue farmers (their customers) or eliminate their choice of seed suppliers. (Psst! The United States government also did not conduct the 9/11 attacks.)

The science of genetic engineering, or genetic modification, is the process by which a small piece of DNA is transferred from one plant to another. This DNA alteration happens in nature all the time, if only more slowly. Plants naturally evolve to become more drought tolerant and avoid creatures that would otherwise eat them. In the 1990s, biologists found they could make tremendous nutritive improvements by simulating this natural selection in foods like corn, soybeans, beets, papaya, potato, eggplant, wheat and rice, just to name a few. The results have been nothing short of remarkable.

Beta-carotene is the red, orange, or yellow pigment present in many fruits, vegetables and whole grains. The compound can be converted to vitamin A, making it an essential nutrient. Carotenoids also act as anti-oxidants, protecting cells from damage. Worldwide, vitamin A deficiency is the biggest cause of preventable blindness, sometimes resulting in death. The disease mostly affects children of undeveloped countries.

By introducing new genes, scientists have succeeded in adding beta-carotene and other essential nutrients to foods like bananas, and rice (called Golden Rice). For millions of people, this could mean life or death. We should be celebrating such advancements.

Plants produce their own natural pesticides, a process vital to species survival. Just because a plant is toxic to a beetle does not mean it will poison all creatures. Chemical make-up differs widely among species. For example, humans can eat chocolate and onions, but dogs cannot. Avocados are toxic to birds. Incidentally, if you have a purebred dog or cat, congratulations! You, my friend, are the owner of a GM pet.

Another scientific marvel is the ability to administer the Hepatitis B vaccine through GM corn. This liver disease kills 800,000 people a year, according to the World Health Organization. Poor countries lack proper access to the vaccine, needles and the required refrigeration.

Several years ago, a well meaning friend insisted I watch the documentary “Food, Inc.” I remember being both skeptical and annoyed; not so much by the fantastical claims and disturbing images, but by the demonization of modern agriculture. It was classic conspiracy theory. I wondered who was behind it and why. As I would later learn, those responsible are anti-biotech food activists. Some have a vested interest in the organic food industry, hence, their bias against traditional agriculture. Most share a rather bizarre, regressive ideology.

Paul Collier nails it, in his piece, “The Politics of Hunger: How Illusion and Greed Fan the Food Crisis.” Collier says, “The first giant that must be slain is the middle and upper-class love affair with peasant agriculture. With the near-total urbanization of these classes in both the United States and Europe, rural simplicity has acquired a strange allure.”

Food activists believe that agricultural giants like Monsanto seek world domination by “controlling the world’s food supply.” If this sounds like science fiction, that’s because it is. Ironically, GMO critics have made life so miserable for the biotech industry, that large corporations like Monsanto and DuPont are the only ones who can afford to navigate the red tape and bullying tactics. 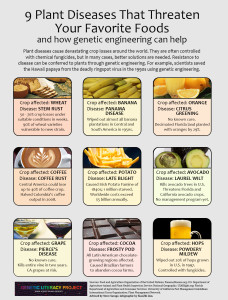 Former anti-GMO activist, Mark Lynas, now regrets his part in starting the movement in the 1990s. In a 2013 speech at the College of Agriculture and Life Sciences, describing how he has since “discovered science,” Lynas laments, “The anti-GMO campaign has also undoubtedly led to unnecessary deaths. The best documented example … is the refusal of the Zambian government to allow its starving population to eat imported GM corn during a severe famine in 2002.”

It is disingenuous to accuse GM food producers of being motivated only by money. Monsanto, with help from Warren Buffet and The Bill and Melinda Gates Foundation, supplies GM seeds to farmers in poor countries free of charge — and not for the purpose of mind control. While profit is a factor in any enterprise, you have to wonder who stands to gain from the rampant use of “Non-GMO” labels on grocery shelves.

So, unless you believe the CIA created the AIDS virus as a tool for population control, relax, GM foods are rigorously tested for safety and will not harm you.

AMERICAN ASSOCIATION FOR THE ADVANCEMENT OF SCIENCE position on GMOs