By John MacDonald on January 27, 2015Comments Off on God Bless the NYPD 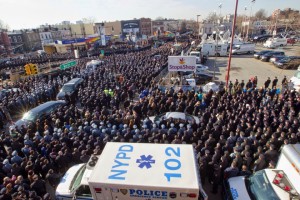 Sometimes words just can’t describe the level of disgust a person can feel, but I will try. Two of New York City’s finest police officers were gunned down in cold blood on December 20th. After months of anti-law enforcement rhetoric by some of our political leadership, their advisors and violent rioting protesters … the chickens have come home to roost. My compassion and sorrow for the two fallen NYPD officers and their families only slightly outweighs my resentment with the people who wished for this day to happen.

The President, Eric Holder and Al Sharpton did everything in their power to ensure that an environment would be created to set the stage for the tragic events of December 20th. Our own US Senators and Representatives in Congress did nothing to reject or condemn the anti-law enforcement sentiment consistently expressed by the President’s Administration. They all have had months to express their displeasure, if they had any at all, but no, they have been silent. How quickly the lessons of peaceful protest, taught to us all by the courageous words and actions of the late Dr. Martin Luther King, Jr., have been forgotten. Forgotten by those elected to lead us and those in a self-proclaimed leadership role in our communities.

I call for all my fellow citizens to reject the anti-law enforcement conditions that now live with in our country. I ask that we positively embrace and appreciate the duties law enforcement performs to protect our lives and property, every single hour of every day. I ask that as we mourn the two slain police officers in New York City and that we also remember the inaction of some of our political leaders to lead, that chose to pile on and react, rather than act. I ask my fellow citizens to remember these same elected officials next time we all gather in front of the ballot box and their names appear for whatever reason.

It’s time we vocalize our support for law enforcement and help change the negative, life threatening climate created by those we have foolishly elected. Remember that it’s our own fault for putting a party first, rather than a person or for letting words replace action and results. Let’s thank law enforcement in our communities and once again reject those who commit crimes and then demand that society ignore their actions. If we can agree on one thing, let it be that we respect the law. As the law and those who enforce it, is the only thing that ensures that we are able to continue this imperfect experiment, we call the United States of America.

God bless our law enforcement everywhere. And to those who wish harm to our men and woman in blue…God may forgive you, but I never will.