By Tom Duggan on September 6, 2016Comments Off on GOP Candidates for Sheriff Tackle Issue of Homeless Inmates

THE ELECTION IS THURSDAY, SEPT. 8th

The Valley Patriot in conjunction with the Greater Lawrence Psychological Center’s Carina Pappalardo, hosted a debate for the Republican candidates for Essex County Sheriff. The event was held at the American Legion on Broadway in Methuen and was covered by both the Methuen and Salisbury cable access channels. The Event was sponsored by Colizzi Memorials (978) 674-7035, Myles and Patricia Burke of Berkshire Hathaway Real Estate (603) 893-7999 and Belle Aire Music Productions (978) 902-7041. 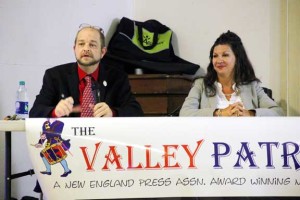 The current Sheriff, Frank Cousins (a Republican), has chosen not to seek reelection, bringing out thirteen candidates for the position that pays approximately $150,000 per year. The Sheriff’s office is a six year term. There are six democrat, and five republican candidates seeking their party’s nomination (two independents will be on the ballot in the final).

CARINA PAPPALARDO: “How will you, as sheriff, address the release of homeless inmates who have no resources when they leave.”

JEFF GALLO: “We have a lot of homeless individuals in the jail. Some come to the facility during certain times of year, or when they have medical problems and have no means of treatment. When an inmate leaves our facility, we try to make sure that they have living arrangements. If they don’t, we work with the community to get them a place to live. It’s very important for us to make sure they have good living conditions. We try to get them a job, we try to give them vocational skills so they can keep working, we try to give them educational skills so they can maintain employment, and we try to give them life skills. So, for me it’s very important that we address the homeless within the facility from day one, when they walk in the door. So, that way, we know when they leave they have a proper place to live.”

CRAIG LANE: “Like Jeff said, often times, we have inmates check-in come winter time. If they are sleeping under an overpass, they would rather a nice warm jail with three hots and a cot. Again, our case workers work with these individuals prior to their release, and hopefully get them on the street so they hit the ground running.”

“One of the failures we have had in the facility is vocational training and trying to give them adequate job skills to take with them to the street. Due to overcrowding, we have used our vocational units basically as warehouses for inmates.”

Lane says that the facility once had several vocational programs like small engine repair that no longer exist due to overcrowding. “Two of those units have now become detox centers which has resulted in a shorter supply of inmate beds. Today, we are twenty inmates over our bed capacity. This pushes inmates out to pre-release. When you are pushing people out of the jail you are not necessarily pushing the people out that you want to push out. You are pushing people out because you have to push them out. That is not a way to run a facility. As much as we need these detox beds … the opioid epidemic is not going away, it’s not [better], it’s getting worse. So, yes the detox beds are needed, they are necessary, our facility is not the place for them.”

“So what we need to do is get them to where they can best accommodate individuals who need the help and use that facility to work on the inmates that we have, that we should be housing”.

JIM JAJUGA, JR:  “We need to provide aftercare for inmates that are released. But, we also need to understand the issues that we are facing. What causes somebody to become homeless? Two main reasons; substance abuse, and in this area it’s the opioids, and mental health issues. Are there other factors? Absolutely, but those are the two main factors, so we need to address those factors. We cannot turn a blind eye to the issues that plague our society. So, we have treatment, we have programs in place that provide inmates who are incarcerated with opportunities to help themselves.”

“Once they are released it is difficult to monitor, so what do you do? You work with the community, you reach out to social programs such as Carina’s [Greater Lawrence Psychological Center], and you say, ‘listen we have these inmates, they have nowhere to go, they have substance abuse problems and mental health problems, and they have clearly committed crimes and been convicted. So, what can you do to assist us to reintegrate these subjects into society so that they don’t commit crimes, so that you don’t become victims? That’s where it’s extremely important. We work with outside agencies; we cannot take an insular approach. We need to not just be municipal agencies. We need to work with social groups, faith based groups, anybody that can help keep you safe.”

ANNE MANNING MARTIN – “Homelessness is a continued problem, and it is the majority of homeless that have been dually diagnosed with substance abuse issues and mental health issues. Homelessness needs to be identified at the moment of arrest, not necessarily at the moment of incarceration. Police officers know in the community who the homeless are, that should be identified and passed on to the judge, to the treatment providers in the courtroom, so that when and if the individual is sentenced, we already know that person is identified for at-risk for homelessness.”

“The entire period of incarceration should be focused on the criminogenic needs of each individual, which is individualized throughout their incarceration. They should get: mental health treatment programs, recovery needs, education, whatever we can get in the six to nine month period, which is the [average] incarceration time for in county facilities. So, you need to do work and efficient assessment of their needs, have them released into the community with a re-entry plan. And with that re-entry plan, we would need mentors and recovery approaches to provide community supervision.”

“Bed availability for homelessness is absolutely an issue. So, what we need to do is work with the community agencies that provide them well before they are being released. Find out what the bed availability is, and information share. Make sure these individuals do get a bed when bed availability is open. There seems to be an app [computer program for mobile phones] for everything. But, I wonder if there’s an app to share when a bed for the homeless becomes available? And information-share, throughout Essex County, to know as the sheriff’s department we have individuals who are being released, you can [then] punch in the database, you can tell when there’s a bed, and that person can contact that bed.”

“It is about information sharing, working with local law enforcement, provide follow up supervisions. Those with mental health and substance abuse issues re-offend at a higher rate than those that don’t.”