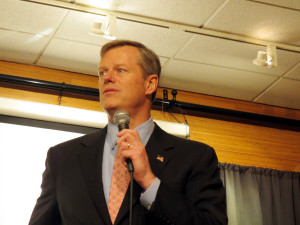 The intersection of Lawrence Street and Park Street will undergo a roadway improvement project.

“I appreciate the opportunity to join Mayor Rivera and members of our state delegation today to announce this important new construction project,” said Governor Baker.  “On our first day in office, we proudly released these funds as a commitment to local governments to ensure access to the infrastructure funds they were promised to repair roads, sidewalks and bridges.”

$95,000 in newly released Chapter 90 funds will go towards planning and engineering work that will get the City of Lawrence to a one hundred percent design plan of the Park Street/ Lawrence Street intersection reconstruction project. The Merrimack Valley Metropolitan Planning Organization voted yesterday to include this intersection work in the Transportation Improvement Program (TIP). The completion of the design plan will allow the city to receive $1.2M from MassDOT to break ground on the project.

“Governor Baker and his administration have done a great thing for the City of Lawrence,” said Mayor Daniel Rivera. “These Chapter 90 funds are allowing us to transform the most dangerous traffic intersection in our city into an intersection that boasts driver and pedestrian safety in one of the poorest census tracts in the State. I am grateful for the work that Governor Baker is doing to help Make Lawrence Better and assist cities and towns; I look forward to continued collaboration in the future.”

The Park Street/Lawrence Street intersection is a serious traffic safety hazard for the City of Lawrence with an accident rate of approximately 2.5 times that of the state average and an average daily vehicle traffic of 12,600 vehicles. The need for safety improvements is telling in the strong neighborhood support of 13,000 residents in the immediate area, including 14 abutting businesses, a community health center that sees roughly 80,000 patients annually, and an elementary school with a student body and faculty of over 200.