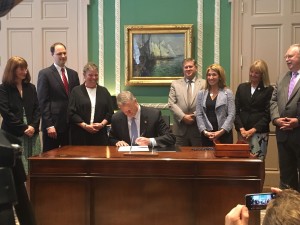 Massachusetts Governor Charlie Baker signed a public records reform bill Friday, after a joint conference committee of the Massachusetts legislature negotiated and reached a final deal on final language of the bill.

For the first time in the state’s history, members of the public and the press will be able to hold public officials accountable for refusing to release public documents to anyone who requests them.

CHANGES TO THE PUBLIC RECORDS LAW

The new law, (H4333) , would allow judges to award legal costs and attorney fees to members of the public who are forced to obtain public records through the courts.

Establishes a public records officer in every city and town as well as every state agency.

Exempts the legislature and governor, as well as some court records.

Includes for the first time, all records from the Massachusetts Bay Transit Authority (MBTA) and all other such agencies and their retirement boars as public records.

Limits copying costs which will now be limited to 5 cents per page for a black-and-white copy.
Limits the cost of an electronic USB drive or other such device can be charged based on the cost of the item.

Municipalities and state agencies will be mandated to provide public records on-line, or electronically to cut down on costs.

Gives state agencies and municipalities the ability to waive fees for public records based on the requestor’s income, or in the service of a greater public good.

Agencies or municipalities that are found to have violated the state’s public records law by a Massachusetts court can be fined not less than $1,000 and not more than $5,000.

Money from such awards will not go to the person who initially requested the records, but instead will go into a state fund. This fund is to be used to provide educational materials and assistance to state agencies and municipalities regarding public records laws.

Establishes a Commission, headed by Secretary of State Bill Galvin, to assess the state’s public records laws and make recommendation for changes to the law in the future.

Allows the Attorney General to “take whatever action deemed appropriate” against a state agency or municipality, including fines or bringing suit in Superior Court.

Exempts records pertaining to gun licenses or applications, the home addresses or personal information of police officers and other appropriate public employees.

THE GENESIS OF A PUBLIC RECORDS LAW

Portions of the bill were initially written by Valley Patriot publisher Tom Duggan of North Andover, who submitted a bill through State Senator Katy Ives (D-Newburyport), and State Representative Jim Lyons (R-Andover) in 2012.

That bill died after being assigned to several sub-committees in both houses.

The bill was reintroduced by Sate Rep. Diana DiZoglio (D-Methuen) in the house, and State Senator Katy Ives in the senate in 2014.

The bill was passed unanimously in the House of Representatives in 2015, but was stripped of the language that would penalize public officials who willingly conceal public records.

The Senate then passed a similar version of the house bill with stricter penalties, and incorporated other bills in the final language.

One bill was submitted by Senator Jamie Eldridge (D-Acton) which included public access to electronic records, and mandated that public agencies post their public records on-line.

Rep. Peter Kocot, (D-Northampton) who chaired the conference, called the bill an “outstanding improvement” over the current law and said the committee had sought to put forward legislation that could be easily understood by a citizen requesting records. Lawmakers developing the bill also worked to minimize the financial impact on smaller municipalities, in some cases setting different standards for communities with populations under 20,000,” Kocot said.

Valley Patriot publisher Tom Duggan said that the bill was a “great start” and proclaimed that the state finally has a real public records law with “some kind of penalties for those who violate it. We haven’t had that ever. Before this law, there was no penalty at all for public officials who refuse to release public documents. Before this law there was no way to recover legal fees if you have to sue your local town to release records they are concealing and legally mandated to release.”

“Since first running for public office, I have been firmly committed to fighting for greater transparency in our government,” representative Diana DiZoglio, one of the bill’s sponsos said.

“Without adequate access to public records, such transparency simply doesn’t exist. The reforms just signed into law, the first in more than 40 years, will significantly improve accountability and enforcement when it comes to obtaining public records. Here in Massachusetts, we have an incredibly civically engaged population and I’m hopeful these reforms will bolster such engagement from the public.”

STILL SOME WORK TO DO, TWO MORE BILLS COMING

“The legislature purposely took out language that would directly fine public employees who purposely break this law,” Tom Duggan said after the passage of the bill.

“Officials like former Lawrence Mayor Willie Lantigua willingly and purposely concealed public records. Bad public officials do not care if the taxpayers are paying the fines for their misdeeds. I was told by Lantigua that I would never see the records I was asking for because, he said, ‘it doesn’t come out of his pocket.’ This bill does not hold the Lantigua’s of the world accountable.”

“So, you can bet I will be filing another bill to amend this legislation, and if it takes four more years to get passed, so be it, I’m in this for the long haul.”

“Despite the efforts of MMA and other public officials, this bill survived seven committees and votes in both houses of the legislature as well as a joint conference committee.”

Duggan says he is already working on reforming another law concerning public records, the “secret statewide voting list” that is compiled from the voting lists of the 351 cities and towns in the state.

“Imagine that the legislature of this state wrote and passed a law specifically stating that the statewide voting list is a secret document. I couldn’t make that up if I tried. How is a voting list, of public voters, compiled on public computers, administered by public employees, and held by the Secretary of State considered not a public record? I will tell you why. Because the insiders all have access to it and nobody else does. We are one of only 4 states in the country that do not release ourt voting list and it’s a travesty to the foundation of our first amendment.”

Duggan says he has already been warned that it will be near impossible to get the statewide voting list released as a public document, but he is not deterred.

“Listen, that’s what everyone said when I filed this public records bill four years ago. They said it would never happen and some of them, legislators mind you, followed up by saying never, ever, ever. Well, never came today on June 3rd, 2016 and I suspect we have a few more nevers coming down the road in regards to public transparency and accountability of elected and appointed officials. Challenge accepted.”