By Tom Duggan on April 24, 2014Comments Off on Governor Patrick Confronted by Protester, Says Justina Should be “Home in Connecticut”

“I know what I can do and I’ve been doing a lot, probably more than you know, and more than the public is entitled to know under the law.” ~ Governor Deval Patrick

Massachusetts Governor Deval Patrick was confronted today on his way into an event at University of Massachusetts in Lowell, where Reverend William Mahoney of the Reformed Presbyterian Church in Washington DC was waiting for him with a sign to free Justina Pelletier.

Mahoney is a spokesperson for the parents of fifteen year old Justina Pelletier who was taken into custody by the Massachusetts Department of Children and Families (DCF) after her parents refused doctor’s recommendations to change her treatment for a rare disease called mitochondrial disease.

The parents claim that DCF, in coordination with Boston Children’s Hospital, kidnapped Justina from their custody claiming that Justina did not suffer from the disease and wanted to perform experimental treatment on her, leading to a sharp decline in her medical condition over the last 14 months.

“I call upon you to free Justina Pelletier!” Reverend Mahoney shouted to Governor Patrick as he approached the Hamilton Mill building in Lowell.

“I Agree!” Governor Patrick yelled back.

The confrontation was caught on video.

“Well then governor, work on it,” the reverend responded. “First of all, don’t tell the Pelletiers that you have a detailed report of neglect and not make that public sir, that’s outrageous.”

Governor Patrick stopped and talked with the reverend while the video continued to roll.

Patrick told Mahoney that the alleged report of neglect was confidential which did not sit well with the reverend.

“Then why are you making (public) accusations? You don’t have a reunification plan. She cannot walk, she’s not being educated, she wasn’t allowed to go to church sir, for fourteen months in your state,” Reverend Mahoney told the governor.

“This girl was not being educated. She couldn’t spend time with the family, there was a gag order against them. You need to release her now and we are willing to work [with you].  Let’s see the reunification plan. Let’s put it together, and let’s get her home. And sir, in your letters, you never once say ‘let’s return her home to the Pelletiers,’ you only say to Connecticut. So, we will be happy to meet with you. I’m a spokesperson for the family. I appreciate your work on civil rights in the past, let’s protect her civil rights. We need to get her home, and don’t say there’s a detailed report of neglect in the home and then not make that available, there is no report,” the reverend accused. 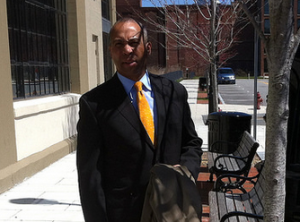 “That’s not a pubic matter,” the governor responded softly. “You know reverend, first of all you should know, I do think she should be at home in Connecticut. We have appeared in court in order to have her sent home to Connecticut. Whether you believe it or not the court has jurisdiction not us.

“There’s so much you can do,” Reverend Mahoney said interrupting the governor. “a hundred and thirty four missing kids under DCF…”

But then the governor backpeddled his position and changed his words slightly. “I agree that she should be home close to her family, if not with her family.”

The reverend then interrupted telling the governor “you know you can help and you aren’t doing it,” amid soft pleas from the governor for Mahoney to let him finish.

“There’s 134 children … Jeremiah, Oliver … governor, we have to fix this situation. Can we meet? Can we talk? Because governor, you can do a lot.”

“I know what I can do,” the governor responded, “and I’ve been doing a lot, probably more than you know, and more than the public is entitled to know under the law. Now you can believe that or not, but I don’t actually get to wave a wand, we have a court system as you know, the court has made findings and made decisions about jurisdiction, we have presented a case to the court about having her, at least home in Connecticut if not with her family, near her family.”

Governor Patrick responded “We are dealing with a court that has made findings, which I’d be happy to talk about without a camera pointed at me.”

The reverend again asked if the governor would meet with him but Patrick turned his back on Mahoney and told him he could talk to the commissioner of DCF, adding “but with due respect the involvement is with the family, and not with, due respect, interested advocates. With the family and there’s where it belongs, he repeated twice shutting down the discussion and refusing to meet with Mahoney as he finally entered the building.

Governor Patrick Confronted by Protester, Says Justina Should be “Home in Connecticut” added by Tom Duggan on April 24, 2014
View all posts by Tom Duggan →