By ValleyPatriot on December 8, 2004Comments Off on Grandpa’s Aquarium – Senior Moments With Jim Cassidy 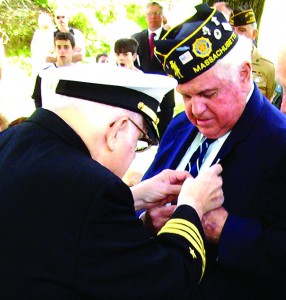 Late at night, as I gaze out the front window, with the snow softly falling and the holiday lights starting to appear on the surrounding houses, my thoughts often drift back to former times when we were much younger and Christmas was — and still is — a special and magical time for youngsters. My brother Billy and I grew up in Worcester, at the top of a high hill in what we called “the Big House”.

Seen through our six and eight year-old eyes, it was a big magical place, filled with grandpa’s great inventions and gimmicks! It actually was the typical three-decker house of it’s day, overlooking Holy Cross College and situated in the midst of everything we needed — schools, church, shops and a textile company offering work.

My mom and dad, along with Billy and myself, lived on the first floor, with Grandpa, Nana and assorted uncles, aunts and cousins occupying the second and third floors and one small cottage in the rear. The property also had a large two-story barn to store Grandpa’s treasures, and various sheds for “other stuff”. The barn was of course the focal point for all family and friend’s activities in the neighborhood. Grandpa worked twelve hours a day in the foundry (along with his five sons) as a molderer near the blast furnace, but still had time to become a self-made scientist and artisan working in astronomy, photography and wood-working.

Christmas Eve was special at the Big House. We boys were shooed off early to bed and told to go to sleep. Then the magical creations took place as we boys burrowed deeper under the covers trying to ignore all of the whispered activities outside our bedroom door.

The traditional 14-foot blue spruce Christmas tree, bundled and stored on the large wrap-around porch, was brought in and decorated along with the entire house. Gaily wrapped presents and toys were brought out from secret hiding places and the Lionel electric train was set up ready to be running at dawn! But always — the greatest, grandest and most stunning sight on Christmas morning was — GRANDPA’S AQUARIUM!

In the sun room, so named due to it’s many windows, sat the focal point of the house, a 250 gallon glass aquarium. One of grandpa’s many building feats, the huge octagonal-shaped tank had a concrete centerpiece created as a four-faced gargoyle, with four gaping mouths allowing fish to swim freely through the statue. Grandpa’s plumbing allowed a fountain of fresh water to enter and come out from the gargoyle’s heads and to eventually drain out through doors to water the grass and flowers. The bottom of the tank contained sand and hundreds of beach shells and rocks of various colors and hues. A movable lighting system was attached to the sides.

Overlooking the sun room was a large and beautiful colored talking parrot, named of course Polly, who resided in a gilded cage in the corner of the room. Polly had the habit of announcing late visitors to the house, especially Uncle Fred who lived upstairs. As Fred staggered home after another weekend party, Polly would screech “Hello Fred, Hello Fred,” thus confirming to all his exact late arrival.

Every year just before Christmas all of the shells and rocks from the aquarium were removed, laboriously scrubbed and cleaned of all algae and scum by grandpa and left shining and bright to be returned to the tank along with the few remaining fish from the previous year. After Billy and I were sent to bed, a mysterious special tank truck delivered and deposited over 150 new sparkling and lively gold fish into the pool, circling in a sea of frenzied color. What a sight to behold on Christmas morning as two little sleepy boys woke up in the Big House, staring in utter disbelief at this glorious sight!

The Big House has now been silenced and I am the last survivor of that beautiful and extended loving family who tried to preserve the special spirit and meaning of Christmas for their two little boys. Gone from the Earth is brother Billy, all fish in the famous aquarium, even Polly the talking parrot who has flown into the sky, possibly looking for the whereabouts of Uncle Fred. The hour is drawing late, but as I continue to gaze out at the falling snow through slightly misty eyes, I smile and think of those wonderful days at the Big House — where the beautiful gold fish continue to swim and Polly the talking parrot calls out for Fred and all of our loved ones — “Til we meet again, ‘Til we meet again.”

God Bless them and Merry Christmas to all.

Jim Cassidy is commander of the American Legion POST 219, and a member of the Council on Aging in North Andover. You can send your comments to Jim Cassidy at ValleyPatriot@aol.com