By ValleyPatriot on April 6, 2012Comments Off on Great Adventurer Charlie Salisbury … seeking next adventure

The title of this story may not be the typical way that North Andover residents see their former Town Moderator. When I first met Charlie, I could see the sparkle in his eye and within the first few minutes of conversation hear his commitment to fairness, integrity and growth. Married to high school sweetheart, Martha, for more than 51 years, Charlie is wise and youthful … an interesting and refreshing combination of characteristics.

Charlie comes from a family that loves politics. His father, a local lawyer, first encouraged him to get involved in the early 1970s. Charlie started off as an appointee to the Advisory Board; then elected as a Selectman for 12 years; then served 21 years as Town Moderator.

My first question: “What does a town moderator do?”

Charlie’s answer: “Give everyone a fair chance to be heard during town meetings.” (Hmmmm … must have been the look on my face … as he sensed that I needed further explanation.)

He continued, “A town moderator is very similar to an umpire. Encourage the fair discussion of both sides of the issues, making sure everyone is heard but at the same time, ensuring that the meeting moves forward.”

This is one example why he was a great moderator.

With just over 18,000 voters in North Andover, 2% – 15% of the population of the town was in attendance, showing strong community involvement. It is a positive indicator that town meetings are ‘worth’ coming to and that voters would be heard. 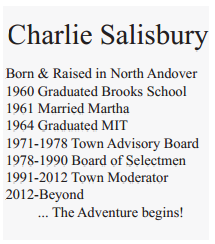 After passing an unbalanced budget, $1.5M short, one strategy was to add trash fees of $200-300 per household. More than 2,700 voters showed up at the special town meeting to share their thoughts as a community, and to collectively solve the budget issue.

First, the High School Field House filled with people, then the auditorium, then the cafeteria … with communications equipment in each area to ensure that those who wanted to speak – would be heard. Standing room only when the meeting convened. In the end, the fees were voted down, and the budget was amended by cutting $1.5M to balance the budget.

The recent election for the new Town Moderator was a spirited contest among three candidates.

Longtime resident and friend, Tracy Connolly Watson had this to say about Charlie, “I wish Charlie nothing but the best and expect to see him very involved in Town politics as time goes on. It’s time for his voice to be heard form the other side of the podium!”

Charlie graduated from MIT with an Electrical Engineering degree and worked for IBM, with one of the key programs that Charlie managed were the development of ‘Scientific Centers’. Scientific Centers were the ‘think tanks’ of IBM – a program on the edge of product innovation and research … leading to new, breakthrough knowledge.

Future adventures for Charlie and Martha include trips to Florida, spending time with his two children and four grandchildren and keeping his eyes open for the next adventure.

Hold tight … Charlie will be back!