By ValleyPatriot on October 31, 2020Comments Off on Great Breweries in The Merrimack Valley ~ JOEL’S FOOD & BEER CORNER

Hey! After a quick pit stop for surgery, I was glad to get out of the house for this month’s column. Instead of just doing food this month, I decided to hit some local breweries. I couldn’t go to one in Methuen because we seem to be the only community in the Merrimack Valley without one.

I started visiting breweries a couple of years ago after a trip to Portland, Maine and it changed my outlook on beer forever. I still enjoy a Bud Light or Bud Light Lime during the summer or a Smithwick’s or Guinness while out at a bar, but these brewery tours opened my eyes to so many different kinds of the nectars of the Gods. Here is my review of 3 local breweries with food reviews mixed in.

Long Blue Cat Brewing (www.longbluecat.com, 298 Rockingham Road, Londonderry, NH) – great outdoor seating area with a fire pit and a second seating area out back, so if you are still leery of sitting inside, they have many options along with a window to order all of your beer. They do not have table service so it may not have been the best choice for me 14 days out from a knee replacement. We aren’t huge IPA fans and sometimes when we go to a brewery, our options are limited. They had 8 beers on tap, including Oktoberfest.

Our favorites were the London Buzz Honey Ale (5.5% ABV) and the Johnny Rye Ale (7.0 ABV). My wife got the Hopical IPA and even though she usually doesn’t drink an IPA, she really enjoyed it. Mild with only a slight, hoppy taste, it went down smooth and it was very refreshing.

They had a full-service kitchen which offered smoked wings. The wings were huge! We got Mango Habanero and they were excellent! The wings would be worth the trip, even if you do not drink. Also, if you sell beer, you need to sell warm pretzels. They came with three dipping sauces; honey mustard, cheese, and a spicy chipotle. Great customer service while there and after we left as we had an issue with our take-home order and they reached out immediately to address. 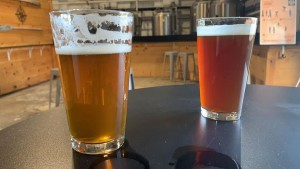 Pipe Dream Brewing (www.pipedreambrewingnh.com, 49 Harvey Rd, Londonderry, NH) When a friend found out I was in Londonderry, he said I needed to go to Pipe Dream. I am so glad I listened to him! 18 beers on tap so many to choose from. They had over 25 outdoor seating areas; picnic tables, barrels with a couple of high top chairs, and larger high top tables. No table service so you do need to go into the facility to order your beer and food, which can get crowded.

Our favorite beers are sours and they had a handful to choose from. They have a Raspberry Sour, Juice Maze (a mix of many berries), and a boysenberry. Our favorite beer was the Pop That Chocolate Cherry. At 10% ABV, this stout packs a punch but it is so smooth. You can taste the chocolate and cherries in every sip. This would be a great beer to have around a fire as the temperatures drop. They have a wide variety of beers to sample, from IPA’s, sours, stouts, pumpkin ale, and Downeast Cider on tap. With so many beers on tap, we need to go back to sample more of their beers and more food.

We ordered the pulled pork nachos and there was more than enough for two. Loaded in toppings, you definitely need a ton of napkins and silverware. Good assortment of appetizers, pizza and sandwiches to eat while enjoying a flight (5-4 oz beers).

Navigation Brewery (www.navigationbrewing.com, 122 Western Ave, Lowell, MA)
Located in an old mill with art studios all around the brewery, the atmosphere is great! Because they are in Massachusetts, in order to open, they need to have food trucks on site. You can check on their website and social media for a schedule. On the day we went, Egg Roll Cafe was on-site (more on that later). You needed to order food from the truck to go along with your first round.

Navigation had outdoor covered seating and also some tables indoors with the garage door open so there was lots of fresh air if you did want to sit inside. They had 8 beers on tap, an IPA, Brown Ale, Saison, and a variety of Pale Ales. One of their pale ales, Navigation, is head and shoulders above the rest. A lighter beer with a 5.7% ABV, it goes down real smooth without that hoppy taste you get with an IPA. This would be a great beer for a football tailgate! Their Brown Ale is a little bit of a heavier drink with a bit of sweetness to it and 5.8% ABV. We didn’t find a disappointing beer during our trip and the staff bent over backwards to answer questions and help out where needed. We will be back as new beers make their way onto the menu.

Egg Roll Cafe (www.eggrollcafe.com, 110 University Ave, Lowell MA) had their food truck on site. They are a restaurant based in Lowell that serves all different types of egg rolls. The food truck menu is much more abbreviated than the restaurant but the food is just as good!

We got the crab rangoon and buffalo chicken egg rolls, which came with dipping sauces. Almost everything is better wrapped in a wonton and fried! They also have cheeseburger and traditional egg rolls on the truck but many more varieties in the restaurant. We also got an order of pulled pork fries which were just as described, a bucket of fries smothered in pulled pork. Those didn’t stand a chance! Fries were cooked to perfection and the pulled pork was not overdone, which often happens when it is used as a topping. You have to check out their full menu, the egg roll platters are great for parties!

Thank you to those who reached out asking how I was doing and sending suggestions. For November, I am heading to Muddy Waters and hoping to get to Ellie’s Farmhouse, the new breakfast and lunch place in Methuen where Fuddrucker’s used to be.

Joel Faretra is in his first year as a Methuen City Councilor, you can reach him at jfaretra67@gmail.com◊