After two years leading the Greater Boston Tea Party (GBTP), Christine Morabito says she is stepping down from her post, paving the way for Patrick Humphries to be elected president of the anti-tax group. Humphries will serve a two-year term starting January 1st.

The president coordinates meetings, speaks for the organization in the media, and pulls together the dozens of tea party groups in the state to educate people on the political process and “community organize.”

Both Morabito and Humphries are founders of the Greater Boston Tea Party.

Morabito said that the incoming president Patrick Humphries is more than capable of leading the organization and his knowledge of the health care system are an asset to the Tea Party’s efforts in fighting Obamacare.

“Patrick has been an excellent representative and tirelessly dedicated member of the Greater Boston Tea Party since its founding. He has many strengths which will serve him well, most important among them is his ability to build and maintain relationships. This is vital in a role where his predecessors have found it difficult to make certain people happy. He has far more patience than I when it comes to dealing with such issues. He has been an excellent asset to the movement and tirelessly dedicated member of the organization since its founding. I have no doubt he will excel in his new role.”

With the recent fractioning of the tea party over what Morabito calls “non-tea party issues” like abortion and gay marriage, we asked Morabito if there is any hope of lowering taxes in the current political environment.

“Yes” she said surprisingly. “If the Tea Party can put aside individual egos and stick to its mission to educate and advocate for limited government, free markets, free speech, individual liberty and personal responsibility, we will continue to grow in size and influence.”

“Over the years, this position has been fiercely challenged by individuals who feel we should include social issues. This only succeeds in keeping the Tea Party small and exclusive, which has never been my goal. We also need to avoid the circular firing squad where candidates are attacked for not being conservative enough. We have to take the small wins where we can get them, especially in Massachusetts.”

Morabito says that the biggest boost the Tea Party has had in the last two years is President Obama himself when he was caught being dishonest saying “If you like your doctor, you can keep your doctor, PERIOD”!

“The Obamacare debate is the very thing that got people off the couch in the first place. Now even ‘non-believers” are starting to admit that the Tea Party was right all along. I believe the country has never needed the Tea Party more. With a few exceptions, we cannot count on our elected officials to look out for the taxpayers. They are entrenched and beholden to the special interest groups who get them reelected. Someone has fight for the middle class,” she said.

She added that with Obamacare slated to be a major issue in the coming two election cycles Patrick Humphries is the perfect choice to lead the movement. 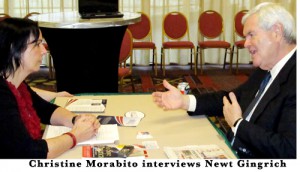 IGNORED BY THE PRESS, MORABITO BROKE THE STEREOTYPE

As President of the Tea Party Morabito took a bold stand defending gays, something that was ignored by the media which consistently paints the Tea Party as anti-gay.

In 2012, a splinter group of the tea party hijacked the annual “Tax Day” rally on Boston Common by pulling a permit before Morabito had a chance to. The group had anti gay marriage and some anti-gay speakers which touched off a firestorm resulting in Morabito calling for a boycott.

Greater Boston joined forces with the Worcester Tea Party, holding a tax-day rally together in Worcester on the same day. Morabito took the WCAP radio airwaves slamming what she called the “anti-gay” group.

On the day of the opposing rallies Morabito said that she was proud of boycotting the Boston rally saying “the tea party is not about gay bashing, fighting gay marriage or abortion. That feeds into the media created propaganda of who and what we are. I think it is my job to make sure we don’t become that. What is happening today in Boston only feeds into the news media and hollywood’s fabricated image of what we are all about. “

“I do not condone, and our members should not condone tea party rallies that are anti-gay or stray from the mission of lowering taxes, smaller government and personal liberties. The people rallying on the common today do not represent the Tea Party they represent a disgruntled minority that has infiltrated the tea party and made it that much harder for us to lower taxes. We should be welcoming ANYONE who wants to help us root out corruption in government and lower the tax burden on our children’s future..”

We asked Morabito if she was shocked by the controversy and that other tea party members had hijacked her rally on the common or that the press ignored the incident.

“Patrick Humphries and I were at a conference in D.C. when the story broke. I could not believe another group would intentionally harm the Tea Party brand by doing something so blatantly wreckless and offensive. All they succeeded in doing was to prove to the media that some members of the Tea Party are exactly what they have been saying about us. To this day I am asked to defend the Tea Party against the actions of those saboteurs of the movement. I was surprised and perhaps a little naïve that the media, with the exception of the Valley Patriot and WCAP, ignored the story. Then it began to make sense. Portraying the Tea Party as inclusive, tolerant and non-judgmental did not fit into the media narrative.”

LOOKING BACK AND LOOKING AHEAD

We asked Morabito to give us her thoughts on where the tea party was when she took over and where it is now?

“When I took over, I felt like we were living out a George Orwell novel. Nothing made sense anymore. The Tea Party, with its average citizens concerned about a government that was becoming too large and powerful, was being blamed for every problem known to man. Yet, the ‘Occupy’ movement, full of anarchists, vandalizing businesses, destroying private property, hacking into corporate computer systems, costing taxpayers millions of dollars and causing general mayhem were being completely embraced by liberals – especially the Obama Administration.”

“I knew we had a lot of work ahead of us to educate folks about what was really happening versus what they were hearing from the mainstream media. The Tea Party is a threat to the status quo; a threat to big government spendthrifts, corrupt politicians and those gaming the system.”

“Over the years we’ve evolved from a protest movement to an activist movement, with an effort towards education, legislative and public policy advocacy where we can affect real change.

Morabito says that in the last few years the Tea Party has been working smarter not harder.

“But I would not trade the experience for anything. The role I accepted has forced me to stretch my comfort zone beyond anything I could have imagined, and I have grown as a person because of it. I am so grateful to all the hard-working activists who have stood side-by-side with me in this incredibly important movement. We have celebrated many wins and suffered more than a few losses. But all in all, I’m proud of what we have accomplished in this state and the organization we’ve built together. I will cherish the friendships and professional relationships I’ve developed over the past 4 years with GBTP.”

Morabito lives in Haverhill and is a psychiatric nurse at a local hospital. Morabito is also a monthly columnist for The Valley Patriot and active with True the Vote, a grassroots organization to protect the integrity of the voting process.