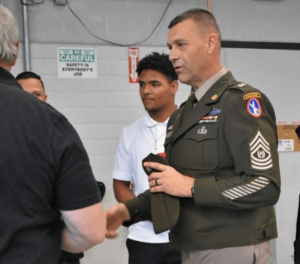 Together, they took a tour of GLTS to see how it developed and changed over the years, and enjoyed a reception with food and drinks prepared by students from GLTS culinary arts program.

Following the reception, a ceremony was held in the performing arts center, where Command Sgt. Major Velez, Sgt. Ortiz of the Continental Color Guard, 3d U.S. Infantry Regiment spoke to students in their junior year about their experiences in the army and why they joined.

Members of the U.S. Army Band kicked off the ceremony by performing the National Anthem, and GLTS senior Xavier Tirado sang the Pledge of Allegiance.

Opening statements were made by GLTS Principal Zielinski, and GLTS Math Instructor Jacob Elwell. Elwell is a U.S. Air Force Veteran. They commended the efforts of veterans everywhere and the sacrifices they make for our country.

After graduating from GLTS in 1988, Command Sgt. Major Velez went on to join the U.S. Military in 1990 as an Infantryman. The Lawrence native quickly excelled in his role holding over 13 positions during his career, eventually attaining one of the most senior ranks an enlisted soldier can earn.

Command Sgt. Major Velez talked to students and answered questions about his career, including his favorite badge.

Velez went on to tell students about the time he got his Paratrooper wings. He told the students a light-hearted story about his first and second jump out of a plane. During his first jump, he explained that he and his class weren’t nervous because they didn’t know what jumping out of a plane was like yet. It wasn’t until their second time jumping that their nerves kicked in. However, Command Sgt. Major Velez said that when he joined the army all he wanted to do was jump out of planes, and in doing so gaining his paratrooper wings. This was his most memorable and special accomplishment, he said.

Velez was deployed and was a part of numerous missions including Desert Storm and Operation Iraqi Freedom.

Currently he is the Senior Enlisted Advisor with the Joint Task Force-National Capital Region and the U.S. Army Military District of Washington. This role provides operational, ceremonial and musical support for local and worldwide public events, national security and special events on behalf of the nation’s leadership.

Sgt. Ortiz of the Continental Color Guard, 3d U.S. Infantry Regiment shared with students his own personal story about joining the Army after graduating high school in 2019.

Sgt. Ortiz grew up in Mexico and moved to the US when he was 17. When he arrived in the U.S., he did not speak English, but want to join the Army. After he graduated high school, he went to a recruiting office and signed-up.

During this time, Sgt. Ortiz used social media in an effort to learn more about the Army and teach himself basic parts of the English language. After joining the Army, he shipped off to basic training where he learned how to speak English.

The U.S. Army Drill team put on a performance for students and the U.S. Army Band performed a musical number.

Command Sgt. Major Velez commended teachers and staff for their hard work and dedication in setting students up for success.

“We are honored that Command Sgt. Major Velez and his soldiers came to Greater Lawrence to speak with our students ahead of Veterans Day,” said Principal Zielinski.

“We would like to thank those who serve for their dedication and commitment to our country. I am very happy students got the chance to speak with Command Sgt. Major Velez and learn more in depth about the army.”

“I would like to thank Command Sgt. Major Velez as well as members of the U.S. Army Band, U.S. Army Drill team and Sgt. Ortiz for taking the time to come to our school district,” Superintendent Lavoie said.

“We are honored to be a part of this ceremony. Students were able to gain a new understanding about what it means to be in the service and were shown another path that they are able to pursue once they graduate.” Greater Lawrence Tech would like to commend all Veterans for their service and sacrifice ahead of Veterans Day.