By Christine Morabito on January 12, 20152 Comments 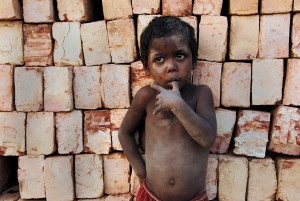 It’s easy to go green when you don’t have to go hungry. Free from the stress of foraging for food, environmental activists have the luxury to experiment with alternative energy sources like wind and solar. These well-fed, self-appointed arbiters of morality have the benefit of time to travel the world in their gas-guzzling, carbon-spewing jets, and attend international climate summits, only to tell the poorest of the world they must go without affordable, reliable heat and fuel.

While we should embrace all types of energy, until they are significantly improved, the underperforming alternatives require backup from those much maligned fossil fuels – coal, oil and natural gas.

Nearly 2 billion people worldwide have no electricity. Desperate and hungry, the poor in places like Africa, Asia and Latin America must burn firewood or animal dung inside their dwellings in order to cook and keep warm. The irony is twofold: 1. They must cut down precious forests to obtain the wood, and 2. This is actual air pollution, that subjects the impoverished to asthma, pneumonia and lung cancer, contributing to about 4 million deaths per year. Children of these cultures are lucky to live beyond age 5 – every year a struggle.

In his book, “The Moral Case for Fossil Fuels,” Alex Epstein says leaders of the Green movement “exaggerate the negatives of fossil fuels and ignore or greatly underestimate the positives.” This denies human beings the power to greatly improve their lives. “You can’t be a humanitarian and condemn the energy humanity needs.”

But, humanity has no particular value to the anti-humanists. In fact, many are advocates for worldwide population control. National Park Service biologist, David M. Graber, wrote in the Los Angeles Times, (October 29, 1989): “Human happiness (is) not as important as a wild and healthy planet…Until such time as Homo sapiens should decide to rejoin nature, some of us can only hope for the right virus to come along.” Dr. Michael Berliner, in his piece for FrontPageMagazine.com opines, “Such is the naked essence of environmentalism: it mourns the death of one whale or tree but actually welcomes the death of billions of people.”

Today’s radical environmental movement seems to demand absolute safety in energy technology, which is just absurd. If our forefathers had been so risk-averse, our civilization would never have progressed beyond the 18th century. Had scaremongers gotten their way, America and Europe would have missed their Industrial Revolution, with all its technological advances, lifting millions out of poverty. Without risk, we would never have embraced electricity, water purification, refrigeration, telephones, automobiles, air travel or modern medicine, to name a few.
Unfortunately, fatalistic environmentalists don’t share our pride for this country. Even more bizarre – they appear to romanticize Third World cultures, disregarding the malnutrition, disease, starvation and premature death.

Powerful NGOs (Non-Governmental Groups) like Greenpeace, Friends of the Earth, World Wildlife Fund, Earth Liberation Front, Sierra Club and others, use their well developed lobbying muscle to bully corporations into funding inefficient green technology. Worse, they intimidate Third World nations into not developing their resources and refusing life-saving, genetically modified food supplies, even when they prove to be safe.

Paul Driessen, senior policy adviser for the Committee for a Constructive Tomorrow, calls this tactic “Eco-Imperialism.” In his book by the same name, he claims these NGOs, “… seek to impose their worldview and change society in ways, and to degrees, that they have not been able to achieve through popular votes, legislation or judicial decisions.” Driessen challenges ideological environmentalism to “devote as much attention to Third World babies as it does to adorable harp seal pups.”

James Shikwati, economist and Director of the Inter Region Economic Network, a Kenyan think tank, has been critical of this meddling and hypocrisy. “Wealthy countries want the Earth to be green. The underdeveloped want the Earth fed.”

Fossil fuels mean live or death to the world’s poor. With reliable and accessible electricity, running water and medical treatment these people do not have to suffer from indoor air pollution and dysentery, or die of preventable diseases like measles, diphtheria and tetanus. Until they can afford a Green Revolution, don’t the truly needy deserve an Industrial Revolution?

It is shortsighted to dismiss life-saving fossil fuels as being dirty. New clean-air technologies have reduced emissions considerably by filtering out many pollutants. With new regulations and innovations, we can expect this improvement to continue.

When you are struggling to survive, your highest priority is probably not constructing a wind farm. Environmental alarmists may have plenty of time to bloviate and hypothesize about theoretical catastrophic global warming, but, we owe it to the impoverished to consider the pros and cons of all energy sources and help supply what is most appropriate. Only then can we claim to truly care about the poor.

How the Industrial Revolution Saved America

2 Responses to "Green Agenda Casts Aside the Poor and Destitute"