Hampstead Academy, An Opportunity For Your Child to Succeed

By Tom Duggan on July 21, 2014Comments Off on Hampstead Academy, An Opportunity For Your Child to Succeed 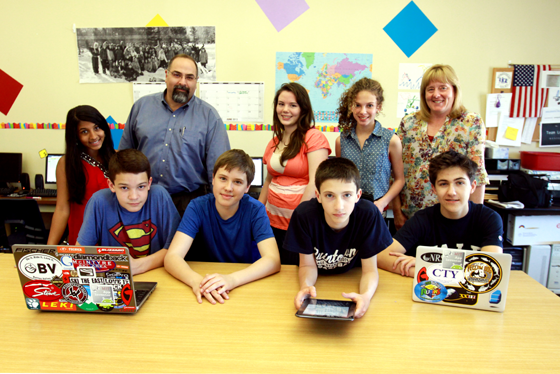 The Hampstead Academy private grammar school in Hampstead, NH was first opened in 1978 as the Atkinson Learning Center and services kids from pre-K through 8th grade.

The school is dedicated to teaching the “whole child”. The school’s founder Lyn Kutzelman says that the basic premise of Hampstead Academy is to try and develop curriculum that melds together with everything a child needs to learn.
“We really integrate all the subjects, like math, art and music. All the teachers are in close contact with each other so that they are not in isolated classes that have nothing to do with the next class, with us it all comes together.”

Kutzleman says that even with special projects and field trips, students get a whole world approach to learning.
“We did an Oceanography unit throughout the school for a whole year which touched on everything from the oceans of the world, to the explorers, to traveling up to the Piscataqua River. We took the kids to show them the tagging of seals on Long Island Sound. They spent time at the University of Connecticut at the Seacoast Learning Center. Learning is not in isolation here. It’s hands on. It’s interrelated with a number of different subjects, so we incorporate math and science and social studies and art. We took them to the Aisle of Sholes and taught them the history of what went on out there. They learned about our natural resources and what is happening with the pollution of our waters and what they can do about it.”
James Stewart, Chairman of the Board at Hampstead says every learning experience at the school is “an opportunity to advance the mission without losing any of the tradition, values and principles that made this school great. That’s what the board is really all about. Anything we consider doing here has to pass the test of, is it going to change the principals and values upon which this school was built?”

“The idea of teaching whole child development is something other schools may say they are teaching, and they may think they are doing it, but the difference is, in this school it isn’t just the amalgam of all the different topics brought together in some sort of a cross disciplinary way, we also teach kids how to be good citizens.”

“Often times our kids in kindergarten will be with third graders to do a project,” Kutzleman added.

“Eighth graders may go back to the preschool and do a reading project, so the kids are helping each other and learning from each other. I truly believe that multiple age classrooms in many cases works much better for students because they can learn by working with other people and the younger kids look up to the older kids so we use that as a teaching tool. That’s the way real life is. We learn from others.”

Kutleman says they do not teach to tests and she sees no need for children to memorize things for the sake of memorizing them.

“They all have cell phones. If they need to know something right away they can look it up. Do they need to know the names of the states or the state capitals? I mean it’s good to know that, but we teach; how they became states and what divides the states, what resources do they have that created those individual states, how are they governed differently and how does that affect them. It’s more important they get the bigger picture rather than just memorizing the names of the capitals.” 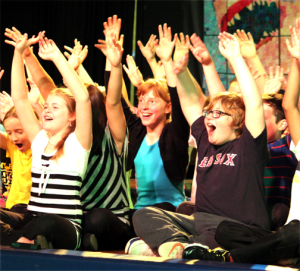 DIFFERENT FROM OTHER SCHOOLS

Hampstead Academy has an advantage over public schools because they are able to structure learning around each child while public schools teach to the masses.

“It’s hard to change the mindset of the industrialite,” Kutzleman says. “The public schools have too many kids in a school, they have to get through all these common core type standards and sometimes that really inhibits the really good teachers from doing what he or she feels is right for her kids in that class at that time. Not all classes are the same, dynamics change. You may have certain children at one age that are functioning at a lower level and some that are really high. How do you deal with that in one classroom? Well, we can.”

“I spent time on the local school board here in town” Stewart added. “I got to know the teachers really well, even the teachers who really are teachers in every sense, they express frustration since that inclusion law was passed. Inclusion is where children that used to be segregated because they had learning disabilities or special needs are now put into the same class with kids that don’t have learning disabilities as well as kids that are gifted and talented. With all of those students at different levels of learning all in the same group, the teachers have to teach to the middle of the road. Many bemoan the fact that the really bright, talented kids are left hanging. There is a lot of focus on the kids that are needy but the kids at the other end are not being taught at the level of their potential. They need to be nurtured, their needs are just as important. So, maybe it’s politics, there’s no political traction around recognizing that those kids are every bit as needy and deserving of having their talents stimulated as the kids at the other end.”

Hampstead’s Headmaster Sam Richards says that he sees the benefits of whole child learning every day.
“My favorite part of the day is when I do my rounds and I walk through every classroom and just say good morning or good afternoon to the kids and the teachers. It gives me a chance to see what they are doing in the classrooms to see the wonder and joy they are experiencing.

One day I walked into a classroom and the 1st graders were stacking Oreos to see how high they could get it and then using the data to do a math equation. One of the nice things about a school like ours is you can structure the time to whatever project you are doing. For example, the art class I was helping kids with last fall was an hour and 45 minutes long, not just the 45 minute structured block of time you get in other schools. So, the kids have time to get into the project. I think we finished our project in two classes whereby if you had a structured block of time it would have taken them much longer and they wouldn’t be as connected or excited about it.”

Richards says that while most headmasters spend the bulk of their time with discipline issues there are almost no discipline problems at Hampstead.

“We instill values. Probably the most important thing that quest for lifelong learning gets woven into the child. There aren’t many schools that do that, in fact I don’t know of any.” 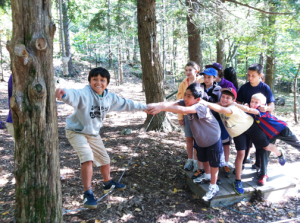 CAN YOU AFFORD NOT TO SEND YOUR KIDS TO HAMPSTEAD ACADEMY

“Many people don’t even think to look at private school because of a cost factor,” Kutzleman said, “or kids don’t want to leave their friends in the school they are in. But, if they are able to make a choice they should really look at this school.”
Headmaster Richards agrees. “One way to look at it is an investment in your child’s future. If you think about the opportunities for a child to develop their passions and have a chance within the context of a classroom to do that, you owe it to your child to do it. We have classes where the teachers will get into a project and go a week longer because the kids are so fired up about it. Here there are opportunities to be involved with art, music and drama while integrating the other courses into what they are learning, it’s an invaluable investment. A lot of the other schools have cut those things and here we use them as additional tools to teach them all the other subjects. You just can’t get that in other schools.”
Chairman Stewart says he sees it as an obligation to the world.

“This may sound a little farfetched but it’s not. The world has a lot of problems that in my estimation are only getting worse. They are complex, they’re global, they’re multicultural, and there is a huge need for thought leaders not only in the area of mechanics and engineering but in social skills, in sociology, and how do we get people to get along and collaborate? So, I say if you have a child who is really bright, I wonder if you don’t have a responsibility, not only to yourself or to your child but to the world to get that kid here and take a look at what we do, because we can inoculate that child and that child might be a force for the future of the planet.”

“I hate to see a really bright kid get frustrated and lose out on an opportunity because the world, the community loses out on what they could contribute if they were given the chance to reach their potential by challenging them and letting them grow. We need to be producing the thought leaders of the world and if that costs you as a parent, $13-16,000 a year that’s a really small investment given what it is going to produce.”

For information about Hampstead Academy: info@hampsteadacademy.org. 603-329-4406.