By ValleyPatriot on January 4, 2005Comments Off on Hanna’s Education Corner – An Interview with Lawrence Mayor Mike Sullivan 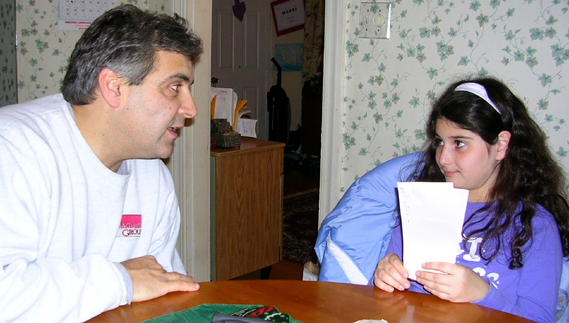 My day is almost identical to your day; it is very structured. I wake up at six o’clock every morning. I get the kids ready to go and then I drive three of them to school. And then I check into the office by 8 o’clock.

I have a very scheduled day. What always throws me off is when some-thing that is not supposed to be on the schedule somehow gets put on the schedule. It could be an emergency that happens, or a fire, and that throws my day off. But I work about 12 hours a day at the office. I go to meetings at night. And I try to spend as much time as I can with my kids. Then I go to bed no earlier than midnight.

Why did you run for Mayor?

Because I wanted to make Lawrence a better city. I had this idea that Lawrence’s image was not that good, and it was too easy for people to criticize the city or move away. I wanted to take an approach that changes the image of Lawrence so people would want to build a home here, move here and raise their kids here. So, I had this passion that this was how I wanted to help the city.

I’ll tell you that my favorite type of books are self-help books. The book I am reading right now is called ‘Change for the Better’. It’s about programming things in your mind to make yourself a better person.

What do you hope to accomplish if you win a second term?

If I win again I hope to be able to continue changing the image of the city. I hope to continue building the new high school, the new transportation center, continue bringing new businesses to the city and continue to bring in great jobs.

What is you greatest accomplishment as Mayor?

I would say there are a lot of accomplishments that the city has made. I don’t claim too many accomplishments were done by myself. Probably the ability to get people together to get something done.

What has been your biggest problem as Mayor?

My biggest problem is people who are elected officials in Lawrence who get in the way of progress because they have another agenda. It’s very difficult to work so hard on things and have people with ulterior motives try to stop you. That is my biggest problem and you can quote me exactly on that!

As chairman of the School Committee do you support MCAS?

I do. I think there has to be a test that takes place throughout the state to make sure that teachers, students, principals, superintendents and even parents are held accountable for the education of the children.

What do you think of calculators in the elementary schools?

I think it’s terrible. You have to learn how to do math in your mind first by memor-izing the times tables, etc. And then when you get in the older grades, I think it is ok. But for younger kids you need the basics. You need the fundamentals. I don’t think it is a good idea to rely on calculators at the earlier grades. We don’t allow that in Lawrence.

Do you think good teachers should get paid the same as bad teachers?

No. They should be paid more. But it is very difficult sometimes to start identifying bad teachers. In Lawrence, for example, there are teachers who have been here for thirty years and they don’t like working here anymore, but they do it just because they have been doing it for so long and they are getting a paycheck. They are really not helping the kids. There are a lot of teachers in the state like that and they need to just step aside. I do think there should be some sort of scale so that good teachers can be paid more.

Do you think four-year terms are good for the mayor’s job?

I do. It used to be two years and I think that was too short. I think four years is enough time to get a lot of things accomplished. And then you can do eight years if you get reelected and you get another term.

Did you go to public school?

Well, no. I went to Catholic School. I went to Saint Pat’s. Then I went to Central Catholic and then on to Western New England College. I had eight years of the Nuns and then four years with the Brothers.

Do your children go to public school?

I have four children and they all went to the Community Day Charter School. I still have one in eighth grade at the charter school. I have two at Central Catholic High School and one at Salem State College.

Are you happy George W. Bush won for President?

I was thrilled when George Bush won for President. I was on the floor of Madison Square Garden when your mom called me on the cell phone asking for an Arnold sign. That’s the sign hanging in your Valley Patriot office, I saw it when I came in .

How will this help Lawrence?

His win will help Lawrence by staying the course with ‘No Child Left Behind’ to make sure every kid has a chance to learn. We have a good governor who works well with the president and that will help cities like Lawrence get a lot of housing money and money for education.

Six months ago, the Lawrence Police Memorial was vandalized. As Mayor, when are you going to get it fixed?

First of all I didn’t realize that. But I will promise you this, I will make this a top priority and I will take care of it.

What do you think of term limits for the Mayor?

I am ok with that. I think eight years is enough time for anyone to be mayor. After eight years, sometimes it is good for a change and people need to move on.

You see these gray hairs on my head? Four years ago I had a full head of black hair like yours; now look at it. I have a real problem with the City Council. Sometimes I feel bad that I don’t work better with them. I do have a tough time working with this City Council. But there is an election this year and the people will decide if I’m doing a good job or not.