By Tom Duggan on April 4, 2006Comments Off on “Harassed” Secretary in Methuen Gets Workers’ Comp 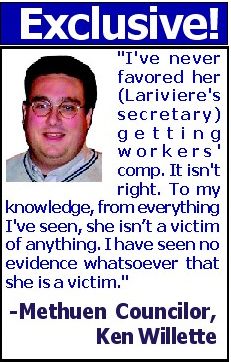 Fulya Metin, the former secretary for the city of Methuen, who alleged sexual harassment against then City Solicitor Maurice Leriviere, has been awarded workers’ compensation benefits.

After claiming that she could no longer work comfortably in the same office where Solicitor Lariviere had allegedly “harassed” her (even though Lariviere was already gone), Mayor Sharon Pollard placed Metin on paid administrative leave starting March 2005. Metin remained on paid leave for several months following the alleged incidents, but because of pressure from the City Council, Pollard removed her from the leave program.

The city of Methuen offered Metin a comparable position in city offices located in the Quinn Building if she would only return to work. But Metin refused to take that position and, instead, filed a claim for workers’ compensation benefits.

Metin is currently receiving $483.32 per week and has been since she was awarded workers’ compensation benefits at a conference held on July 20, 2005. The conference was heard before Judge Douglas Bean at the Department of Industrial Accidents, with Judge Bean further awarding benefits retroactive to June 9, 2005.

According to City Solicitor Peter McQuillan, the conference order was appealed by the city of Methuen and a hearing is scheduled for this June.

The workers’ compensation claim filed by Metin was based on her allegation of sexual harassment and emotional stress. The medical evidence presented at conference was apparently enough to establish that Metin suffered an injury at work where compensation had to be awarded according to Massachusetts General Laws, Chapter 152.

By statute, the hearing, as with the conference, will be heard by Judge Bean. The hearing was originally scheduled for March 5th, but has been rescheduled to June.

Methuen Mayor Bill Manzi told The Valley Patriot that he could not comment on the case as it was in litigation, but did confirm that Ms. Metin had been awarded workers’ compensation benefits and was presently receiving weekly payments.

Manzi also confirmed that the hearing of March 2006 was rescheduled until June because the city had recently hired Attorney Frederick Fairburn to take the matter over from David Bain.

When questioned by The Valley Patriot about the workers’ compensation claim, City Councilor Kathleen Corey-Rahme seemed surprised, though she would not say if she had already known about the claim.

“It is an open and ongoing investigation, so I just don’t feel comfortable commenting on it,” Rahme said. “However, I can say that it is absolutely ridiculous that she is receiving workers’ compensation, especially given the fact that the city offered her another job at the Quinn Building. They attempted to make her feel comfortable and she refused it,” Rahme added.

City Councilor Ken Willette said that at a public meeting former Mayor Sharon Pollard continually stated that Metin was, in fact, a “victim.”

“I have had to repeatedly correct that; she is an alleged victim,” Willette said. “I’ve never favored her getting workers’ compensation. It isn’t right. To my knowledge, from everything I’ve seen, she isn’t a victim of anything. I have seen no evidence whatsoever that she is a victim.”

On October 24, 2005, Fulya Metin underwent a court-appointed, impartial medical examination by Dr. Michael Marcus, whose specialty is psychiatry. Because of privacy issues, The Valley Patriot was unable to obtain documentation about the exam.

Judge Bean will use the results of this examination in determining whether or not Ms. Metin’s workers’ compensation will continue. In his hearing order, Judge Bean could continue benefits, reduce benefits or terminate benefits. Either side could then appeal the hearing order to the next level within the Department of Industrial Accidents, the Review Board.

The $483.32 in weekly benefits is based upon 60% of her average weekly wage of $805.53. The conference order also awarded payment of her medical bills and her attorney fees as well as expenses.

Metin has another case pending with the Massachusetts Commission Against Discrimination (MCAD). Boston Attorney Kenneth Mickiewicz has confirmed that his office is representing the city of Methuen for the MCAD case, but said that there is no hearing date scheduled as of yet.

To date, Ms. Metin has received over $20,000 in workers’ compensation benefits.