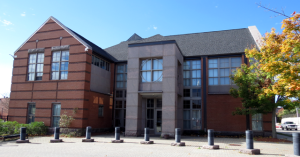 According to police, Haverhill Detective Sean Scharneck was conducting surveillance in the area of Lawrence St. on Wednesday morning while children were walking to school due. Scharneck was investigating a report last week from a young child who said he saw a man exposing himself while driving.

During Detective Scharneck Scharneck’s surveillance he observed Matthew Homan operating a vehicle similar to the suspect vehicle with his genitalia exposed as he masturbated while driving past him and the children walking to school.

Homan was stopped by Detective Scharneck and arrested. Homan was booked at the Haverhill Police Station and then arraigned in Haverhill District Court where he was held on $10,000 bail.

Detective Captain Robert Pistone stated “ Although it is unfortunate that a child witnessed this alleged, crude, alarming behavior, The Haverhill Police commend the bravery and maturity of this young victim by coming forward and reporting the initial crime last week to the Haverhill Police, which lead to the subsequent investigation and arrest of Homan by Detective Sean Scharneck. This particular case was a priority for Detective Scharneck who put in a lot of time watching the neighborhoods where kids were walking to schools in the morning. The Haverhill Police encourage parents to speak with their children to see if there may have been any other incidents similar to this that may have gone unreported.”