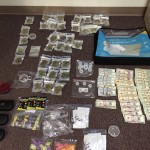 Haverhill police arrested a Watertown man Thursday night on Computer Dr. with a ledger of distribution points, thousands of dollars in illegal drugs, and $1,656 in cash. Police say that John Rielly, (36) was delivering drugs to a woman who ordered them on-line through the website  “Boston Herbal Organization”. A press release by Detective Lt. Robert Pistone explains that the website poses as a medical marijuana site.

“The website has a full menu of Marijuana based products for sale and delivery which it states to ” qualified patients only “. Boston Herbal Organization also advertises on the website of Massmedcard.com where they state they are seeking new patients.”

Lt. Detective Pistone says that the arrest was made as the result of a grant targeting illegal narcotics and gangs. According to the release, Haverhill Detectives seized $1,656 dollars, over a half pound of Marijuana, Hash, Cannabis Candy , and THC oil with a street value of over $3,000. Haverhill Detectives also seized drug ledgers from Rielly that indicate he was making deliveries in multiple cities throughout Massachusetts.

Riley was booked at the Haverhill police station and charged with possession of class D Substance with intent to distribute.