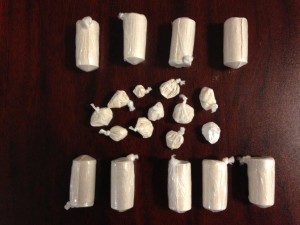 Haverhill Police Narcotics Detectives, with the assistance of the ATF, Homeland Security, and US Marshal Service  arrested 34 year old Lujan Hilario Baez of 117 High St in Lawrence. The arrest took place at 11 Federal St. in Haverhill.

Baez was charged with trafficking over 100 grams of heroin and conspiracy to violate drug laws resulting from an investigation into Baez for delivering heroin near Haverhill exits in shopping plaza parking lots.

Haverhill Narcotics Detectives stopped Baez on February 5th at 35 Computer Dr. after an informant arranged to buy 10 grams of  heroin from Baez. No heroin was located, however detectives found evidence of a hidden drug hide in the car.

A K9 officer and K9 from the Essex County Sheriff’s Department got a positive response from the dog for evidence of heroin in the vehicle.

The vehicle was towed back to the Haverhill Police Department where a vehicle drug hide expert from the Essex County Sheriff’s Department successfully located the hidden drug hide which yielded 110 grams of Heroin. Haverhill police say 110 grams has a street value upwards of $9,000.

Police say there is still an outstanding warrant for a second individual,  35 year old female,  Liani Matos- Bonilla of 212 Wilson St., Apt. 1 in Haverhill. She is wanted for trafficking heroin over 100 grams.

Police are asking the public for help. Anyone who knows of Bonilla’s whereabouts is asked to call Haverhill Police immediately at (978) 373-1212 or 911 within Haverhill.