Herman’s Hermits ~ IN THE GROOVE WITH CINDY ANNIS

By ValleyPatriot on June 27, 2017Comments Off on Herman’s Hermits ~ IN THE GROOVE WITH CINDY ANNIS 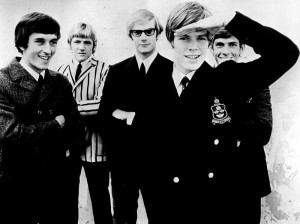 I hope you enjoyed last month’s column as much as I’ve enjoyed sharing it with you. On June 11, at Carry Hall in Lexington Massachusetts at 7:00 PM, people will be able to rediscover the music of Peter Noone. So, take a musical journey with me, as I tell you the story of Herman’s Hermits.

The naming of the band is very interesting. One night, Peter Noone was with the members of the band, and put his glasses on backwards. They all thought he looked a lot like Sherman from the Rocky and Bullwinkle cartoon. Sherman was shortened to Herman, and the members were the Hermits. Thus, the name Herman’s Hermits.

Herman’s Hermits was a mashup of two groups. Members from a group called the Heartbeats, which included a fifteen-year-old Peter Noone on piano and lead vocals, Keith Hopwood on guitar, Karl Green who was also on guitar and harmonica. Alan Wrigley, on bass, and Steve Titterington on drums, were the original members of Herman’s Hermits. Derek Leckenby who played lead guitar and Barry Whitwam playing drums joined later from another group called the Wailers.

Like most groups, they were discovered after performing in a club. Their manager Harvey Lisberg, sent a post card to their soon to be producer Mickie Most asking him to see the band live at the Beachcomber in Bolton, UK. After hearing the performance, most wanted to just sign Noone on as a solo artist, but Peter Noone refused to leave the rest of the band behind. It was the whole group or nothing.

Their first hit song was “I’m Into Something Good”. The first recording of the song was by Earl Jean. Carole King recorded the demo of the song with Brian Wilson. When the Hermits got a hold of the song in 1964, they spent nineteen hours recording it under the guidance of Mickie Most. The song reached #13 in October of that year. By 1965, the group had six top 10 hits on the U.S. charts.
In the music industry, it didn’t matter if you had talent, if, you had Mickie Most as a producer, then some of your songs would have studio musicians to back your tracks. Herman’s Hermits were no different. Many of their songs were backed by studio musicians like Led Zeppelin members Jimmy Page on John Paul Jones. They did however get to record some songs without the help of studio musicians.

By 1970, the band started to fall apart. By December, Peter Noone quit the band so he could go back to acting. In a failed attempt at a solo career, Noone worked with David Bowie. From there, he managed to have one hit record in the UK. As the 70s went on, Noone was on British television. In the 90s, he was host of a music show on VH1 called “My Generation”.

Their music is alive and well. Like all of the great groups from the 50s and 60s, Herman’s Hermits still performs live. Peter Noone still sings lead, but the backup singers are all different.
Well that’s the story of Herman’s Hermits. I’ll see you at the concert on June 11th.