By ValleyPatriot on January 2, 2018Comments Off on Hero Among Us at the Garden 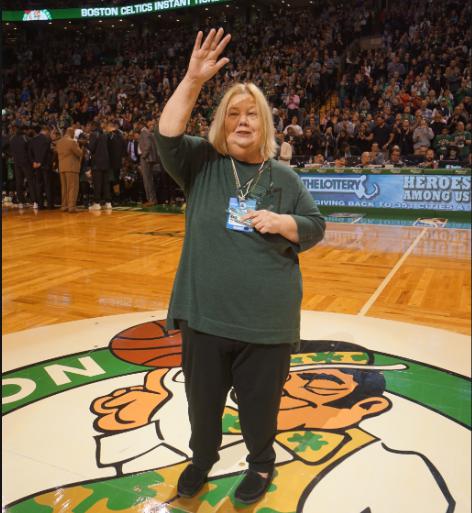 For Dorothy “Dot” Hayes of the Jason Hayes Foundation, her week ended being honored in center court at the Boston Celtics/Orlando Magic game on November 24, 2017.

Establishing the aforementioned foundation in 2005 in memory of her late son, Jason Hayes, Dot and other members of the foundation’s goal is to “raise money for young adults who have suffered from early childhood trauma including mental, physical and emotional abuse.”

Working with endless amounts of families over the past 12+ years, Hayes and the foundation has sent families in need to programs to get the support they need in order to grow and develop in the right direction under the tough circumstances they are experiencing.

“I do it for Jason,” said Hayes remembering her son who tragically passed away at the age of 14. Speaking to Hayes, she mentioned that children who express different behaviors growing up may not intend to act that way, and need to seek help because they are trying to behave in a well manner but don’t always know for certain how to express good feelings.

Hayes wants everyone to remember her son who grew up in Reading. She mentioned her son had a great spirit and did amazing things, unexpected at times. “One time after a Christmas party, Jason saw two guests walk down the walkway that was covered with ice.

Jason must have had a feeling they were a little nervous of the icy walkway, walked up to them and said ‘It’s a good night for a walk’ offering his arm for support”’.

For more information about the Jason Hayes Foundation, go to www.jasonhayesfoundation.org.