By Dr. Charles Ormsby on July 8, 2005Comments Off on Hero in Our Midst – Charles Bruderer – Valley Patriot of the Month 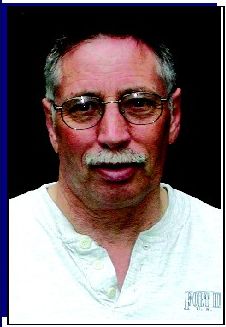 Charles Bruderer of Methuen is just wrapping up his military career. He will be leaving the National Guard after 33 years of service to our country and a record that recently won him the Meritorious Service Medal.

Born in Ogden, Utah and raised in Brigham City, Charles found himself between jobs in 1969. With the draft actively “recruiting,” Charles and two friends decided to enlist. Charles and one of his friends picked the Navy and together they signed up in May of that year. By September he was on active duty.

After basic training, Charles was sent to Radarman School in San Francisco where he was trained in radar operations, radar navigation, and radiotelephone procedures.

At the conclusion of his training in April of 1970, Bruderer was assigned to the Navy’s River Forces, affectionately referred to as the “brown water Navy”. One month later he was on a flight to Saigon and then on to Song Ong Doc, which translated means the river of Mr. Doc. The Song Ong Doc runs through the Ca Mau Peninsula, on the Southern tip of Viet Nam, and flows into the Gulf of Thailand near the South China Sea.

Charles lived in a “hooch” on a “base” floating in the mouth of the river. Moored at the base were River Assault Boats and PBRs, short for Patrol Boats – River. Charles served as a Radarman Seaman (RDSN) in the Advanced Tactical Support Base Operations Center. In this capacity he served as Army liaison and communicated both with Navy ships off the coast and with boats conducting operations on the river.

Enemy rocket and small arms fire were common near the Operations Center, but on the night of October 20, 1970 all hell broke loose when the base came under attack by a Vietcong company using heavy and medium weapons. Operations Specialist 3rd Class Bruderer (see photo at Song Ong Doc shortly before the attack) was just going to bed when he heard some unusual explosions. 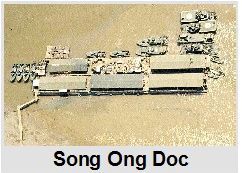 Since the most valuable elements at the base were the boats and the men, the defensive plan when attacked called for immediate evacuation to the boats and then to fight the enemy from the river. As Bruderer was exiting his hooch, it was hit with an incoming B-40 Rocket Propelled Grenade, or RPG. Fragments from the explosion hit Bruderer and became embedded in his back. Two Americans were killed in the attack including one of Charles’ hooch-mates. Several others were wounded by shrapnel.

With the base largely destroyed and Bruderer now wounded, he and most of the men from Song Ong Doc continued their operations on an LST offshore. After the Operations Center was rebuilt, approximately 10 km up-river at the Old District Capital of Song Ong Doc, Bruderer and his fellow resumed operations at their new base.

In December of 1970, Bruderer was reassigned to the Provincial Capital of Ca Mau where he stayed until his 21st birthday the following February. While at Ca Mau, an incoming enemy rocket hit a flagpole directly in front of Bruderer’s quarters and exploded. Several Americans were killed in the attack and, had this round not hit the flagpole, Charles would have almost surely been among those killed. 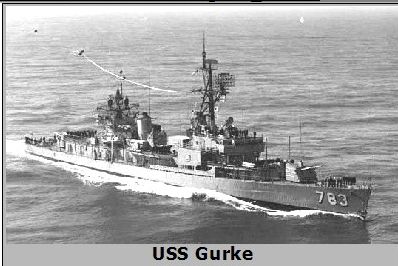 ruderer’s final four months in Vietnam were served in Cat Lai (near Saigon), Ben Luc, and Tan An (the last two near the “parrot’s peak” area of Cambodia). He finished his tour in Vietnam in May of 1971 as a Radarman 3rd Class.

Bruderer spent the remainder of his four-year enlistment on sea-going vessels. In 1971 he was assigned to the Destroyer USS Gurke (DD 783), which was briefly deployed to Japan and then stationed off the coast of Vietnam to provide Naval gunfire support to operations ongoing within South Vietnam.

By 1973, while the US was engaged in withdrawing troops from Vietnam, the North Vietnamese were streaming troops southward. To discourage this, the Gurke was assigned to the waters off North Vietnam to provide some well-deserved shelling. DD 783 was the target of intense hostile fire during many of her naval gunfire missions while operating close to the North Vietnam coast. While no incoming shells directly hit the Gurke, the ship was hit numerous times by shrapnel. In many cases, Bruderer could see the shells and the nearby impact points on his radar screen. 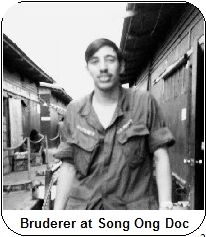 Charles Bruderer left the active duty Navy in 1973 as an Operations Specialist, 3rd Class. Bruderer subsequently enrolled at Weber State University in Ogden, Utah to study German, music and accounting, and then joined the Army National Guard in October of 1977. In the National Guard he became a Fire Direction Center Chief with rank of Staff Sergeant.

By 1990, with events heating up in the Middle East, language skills became very valuable and Bruderer, having studied German, was transferred from Artillery to Military Intelligence. Initially he was trained as an interrogator and later assigned to Counter-Intelligence. Bruderer’s training caused him to be very upset with the events that recently took place at Abu Ghraib Prison in Iraq.

He commented that he “was very upset by the news of the reported mistreatment of prisoners at Abu Ghraib and that American Soldiers could be involved in this type of activity.” He also commented that winning the hearts and minds of the Iraqis was critical to our efforts in Iraq and the events at Abu Ghraib were a very big setback in the War on Terror.

Charles moved to Massachusetts in 1996 when he joined Echo Company, 223 Military Intelligence Battalion, Cambridge, Mass., where he was assigned as a Platoon Sergeant. Shortly thereafter he moved to his present home in Methuen.

Life took a major turn in February of 2003 when Bruderer received a call at the office. The message was, “You’re being mobilized. Report immediately to the Armory for Active Duty.”

After a few weeks at Ft. Bragg, N.C., Sergeant First Class Bruderer was flown to Kuwait on a C-17. Three weeks later the balloon went up and, only one week after the tip of the spear entered Iraq, Bruderer followed. Life now consisted of tents, dust, wind, heat, and Meals Ready to Eat (MREs). Thirty-plus years after serving in Vietnam, Bruderer was back in a combat theater and living in conditions that in some ways, at least initially, were worse than he had experienced in Vietnam. (Note: Bruderer recommends the Teriyaki Chicken and Chow Mein MREs if you must subsist on them. Avoid Turkey if at all possible.)

After eight months living in tents at various locations, Bruderer was finally stationed at Bakir Army Air Base, known as LSA Anaconda, near the Tigris River in the Sunni Triangle … a location that we know from listening to the news is not very friendly to Americans. Riding in a convoy in the Sunni triangle in an unarmored Humvee while holding an M-16 out an open doorway can be pretty exciting … although you keep hoping it won’t be. Note that the Humvee’s doors were removed because they provided little protection while restricting the troop’s field of fire and much-needed airflow. 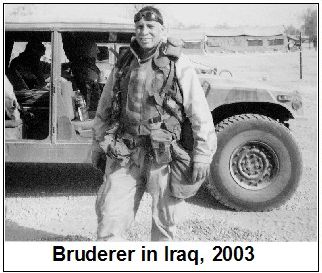 The threat of rocket and mortar attacks was always present. Baker Airfield was large and it was shelled frequently … often with rounds landing close enough “to get my attention.”

Charles left Iraq in February of last year. When asked about his opinion of the war and our chances for success, he said that he remains convinced of the importance of the mission. “The worst thing we could do is pull out prematurely. It is the worst thing we could do to the memory of the people we lost there”, he said. “Once we’ve gone in, we can’t pull out. The job must be completed. If we leave early it will just become a terrorist haven.” The key to our success, he says, is that “we must win the hearts and minds of the people and to do that we must convince them we do not intend to stay, and that their emerging government is not a puppet of the U.S.”

Charles Bruderer, thank you for your service.